BUFFALO, N.Y. (WBEN) - The family of 19-year-old Saniyya Dennis is pleading for help from the community as the search continues to find the Buffalo State College student who was last seen on April 24.

Their frustration was displayed in a plea for the public to help by alerting authorities to any information and in an uncomfortable confrontation with SUNY Buffalo State administration and police late Friday.

Buffalo State's University Police Department said Dennis was last seen on campus leaving her residence hall around 11 p.m. She is a Black woman who is 5-feet-3-inches tall, weighs approximately 125 pounds, and has black hair and brown eyes.

The family of Saniyya Dennis, who remains missing from SUNY Buffalo State since 4/24, is asking for urgent action. Any information please call 800 346 3543. pic.twitter.com/FEQWJ3HThH

"There is no evidence of foul play at this time," University Police said on Wednesday. "University Police has circulated her information statewide to police agencies and hospitals through the New York State Missing Persons Clearinghouse."

The family returned and were frustrated about the investigation. They took aim at Buffalo Mayor Byron Brown.

"Where's the mayor at?" Dennis' father, Calvin Burr, asked. "He's Black. I guess that don't matter. My daughter is a Black, honor roll student at the college and has no tendency of doing nothing. We're all baffled with what's going on. The fact that he's not here speaks volumes."

During the press conference late Friday afternoon, the Dennis family openly challenged campus police and the SUNY Buffalo State President for not acting quickly enough in launching a search and not working to gather video evidence from the NFTA and other sources.

During the press briefing, both the family and press learned from campus police that the NFTA had located video of Dennis and that was being reviewed Friday evening.

Mayor Brown was expected to meet with the family on Friday evening. 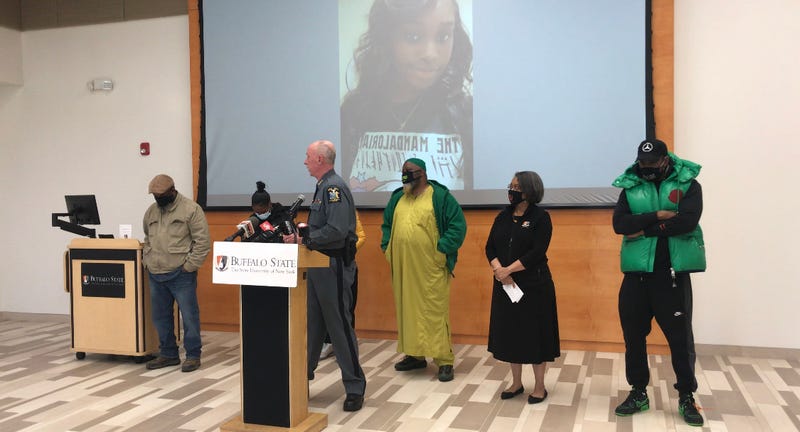