Buffalo, N.Y. (WBEN/AP) - "The eyes of the nation are on Buffalo, and those eyes are full of tears and they're full of sympathy for the violence and the tragedy that has been exacted on goodness in people."

It was around 2:30 p.m. ET on Saturday, an 18-year-old gunman, sporting an assault rifle and tactical body armor, opened fire at a Tops Friendly Market in the 1200 block of Jefferson Avenue in the City of Buffalo.

It was confirmed by Buffalo Police Commissioner Joseph Gramaglia that multiple people were struck by gunfire, as a total of 10 people were killed in the store, as well as outside in the parking lot.

One individual killed was a retired Buffalo police officer who was working as a security guard in the store. It is believed he fired rounds that struck the shooter, but took no effect after striking the individual in their body armor.

An additional three people were shot during the incident, but they are believed to have suffered non-life-threatening injuries.

According to authorities, 11 of the people shot by the white suspect on Saturday were African Americans, with all 10 of the deceased being African Americans. Meanwhile, the other two people who were shot were white. 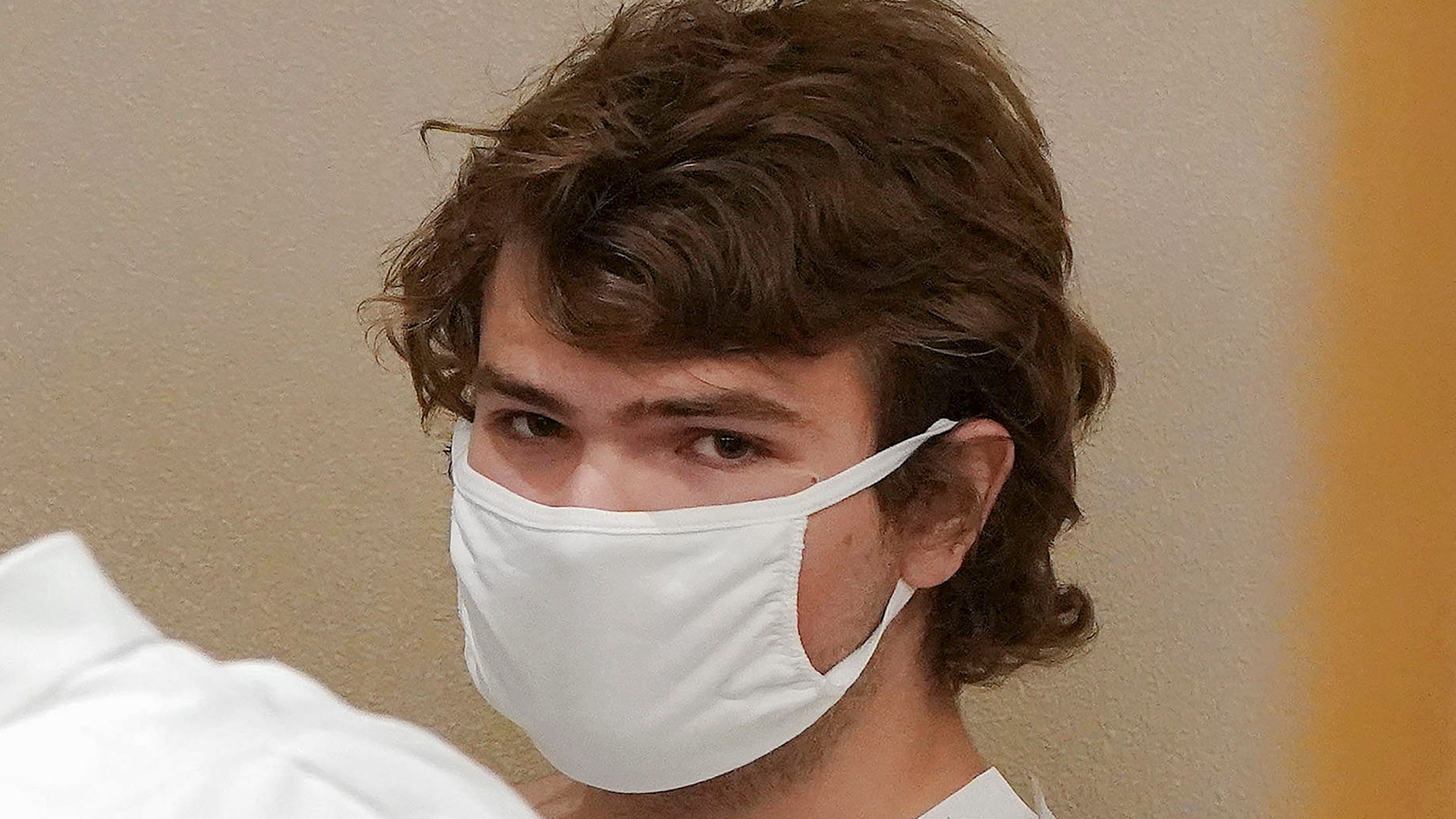 The FBI's Buffalo Division says it is investigating this mass shooting as being a racially-motivated hate crime.

"This is the worst nightmare that any community can face. We are hurting, and we are seething right now as a community," said Buffalo Mayor Byron Brown at a press briefing following the shooting. "This is a day of great pain for our community."

“The shooter was not from this community,” said @MayorByronBrown as he addressed the mass shooting that occurred in #Buffalo. “This is a day of great pain for our community.” pic.twitter.com/dPTx8JzfPV

"This was pure evil," said Erie County Sheriff John Garcia following the incident. "It was straight up a racially-motivated hate crime from somebody outside of our community, outside of the 'City of Good Neighbors', coming into our community and trying to inflict that evil upon us."

Buffalo Police tweeted out after the incident that the shooter was taken into custody.

BREAKING: BPD on scene of a mass shooting at the Tops in the 1200 block of Jefferson Avenue. Police say multiple people have been struck by gunfire. The shooter is in custody. Motorists and residents are urged to avoid the area.

The Erie County Sheriff’s Office wishes to pass along its condolences to the family and friends of today’ shooting. Sheriff Garcia has ordered all available resources and personnel to assist the @BPDAlerts

It was confirmed that the shooter, Payton Gendron, is not from Western New York, rather he traveled three-and-a-half hours from Conklin, New York to carry out the shooting.

Police Commissioner Gramaglia also confirmed the shooter was livestreaming the shooting via social media, and it is being further investigated whether he had posted a manifesto online via Discord.

As was later announced by the District Attorney's Office, Gendron was arraigned in a Buffalo City Court and now faces one count of Murder in the First Degree (Class "A-I" felony), which is the highest murder charge in New York State.

"It carries with it a sentence of life without parole, the highest punishment we have in New York State," said District Attorney Flynn of the suspect's charges. "He was remanded. The judge ordered a forensic examination. A felony hearing will now take place in five days, and then the investigation continues. So we have taken the appropriate steps right now to get him behind bars."

While Gendron faces one charge of Murder in the First Degree at this time, Flynn says the potential list of charges could extend much further.

"We are now investigating terrorism charges, other murder charges, along with working with our partners in the federal government so that they can, perhaps, file charges, as well," he said. "I assure everyone in this community, justice is being done right now, and justice will be done."

The 18-year-old male suspect will be charged with Murder in the First Degree. The suspect has not been identified at this time as he has not be arraigned on the charge. The arraignment is expected to occur tonight in Buffalo City Court. pic.twitter.com/aP2LCqPSTC

“We are shocked and deeply saddened by this senseless act of violence and our thoughts and prayers are with the victims and their families."

New York Gov. Kathy Hochul wasted no time following the incident traveling back to Western New York from Albany, as she addressed the shooting later that evening, while giving local authorities her support from the state level.

"It's hard to know what to say," said Gov. Hochul shortly after arriving to Buffalo on Saturday. "This is my community. I know this community well. I've walked these streets, I know the individuals who live here, the wonderful tight-knit neighborhood. To see that sense of security shattered by an individual, a white supremacist who has engaged in an act of terrorism and will be prosecuted as such.

"In a cold-hearted, cruel calculating way, a military style execution targeting people who simply want to buy groceries in a neighborhood store. It strikes us in our very hearts to know that there's such evil that lurks out there."

The scene at Tops on Jefferson Ave and the scene across the street from Tops at Jefferson and Landon. #multipleshot pic.twitter.com/HnctdRlxqf

One woman tells WBEN her mother was inside the Tops store and described the chaos that unfolded inside. pic.twitter.com/ABLpRex4hk

Hear more from Saturday's press briefing on the shooting in the player below: 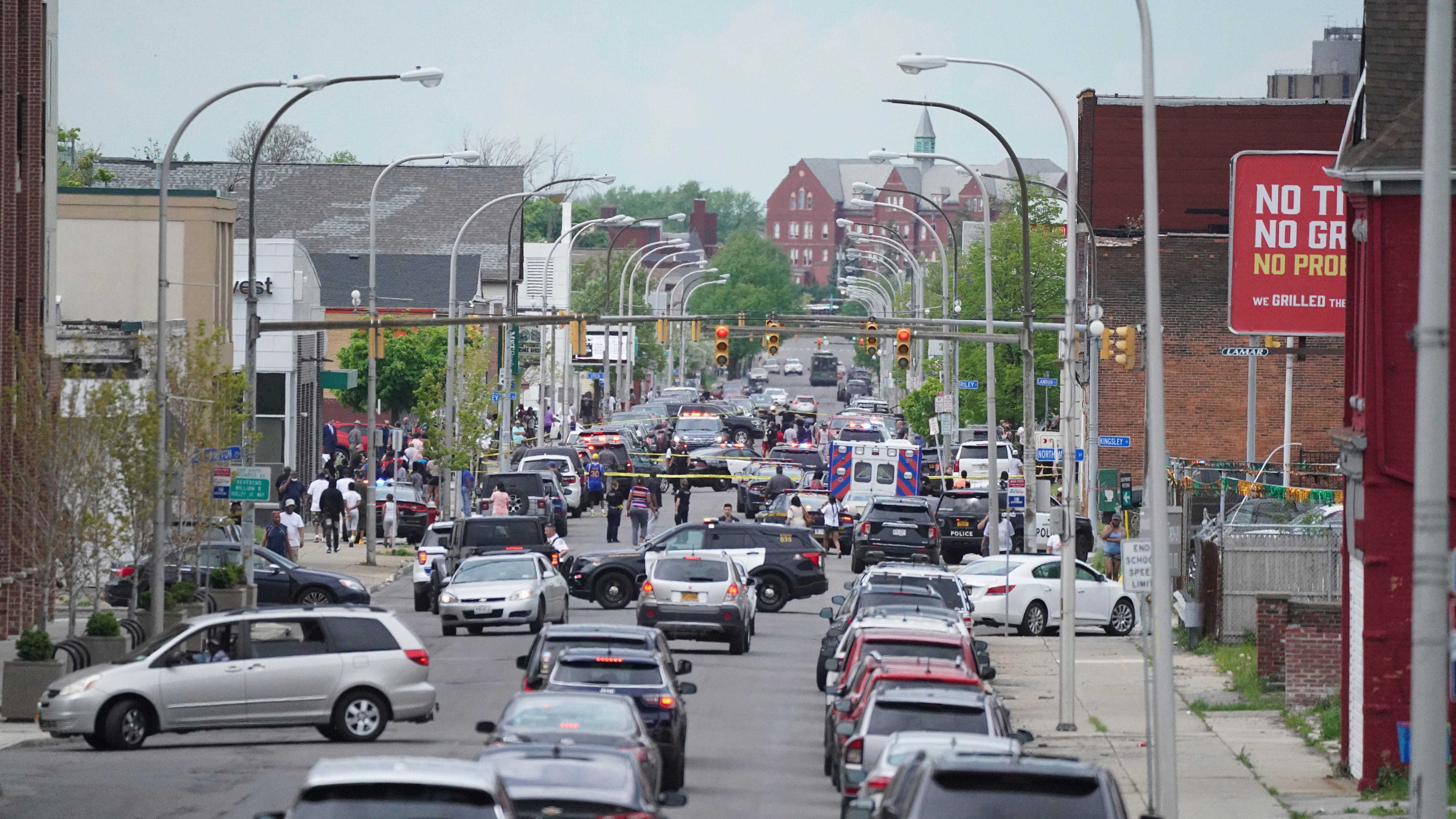 PHOTOS: An afternoon of horror unfolds in mass shooting at Tops