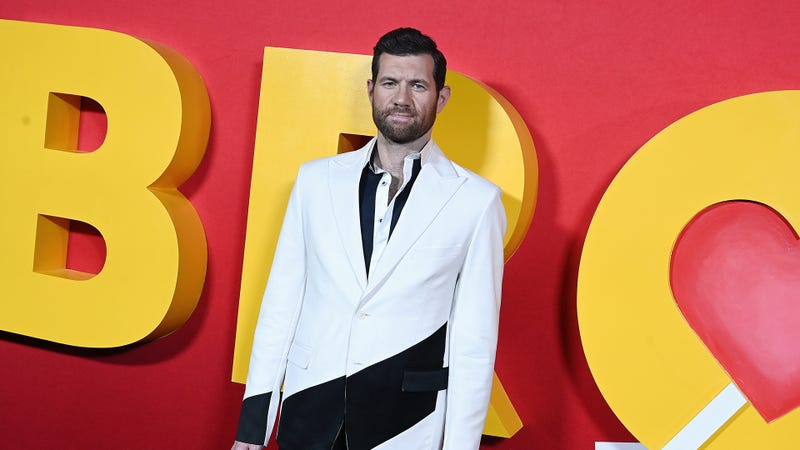 Known for his wild and raucous antics on his hugely popular series Billy On The Street, comedian Billy Eichner joins Conan and crew this week to discuss his film, Bros, and a whole lot more on Conan O'Brien Needs A Friend.

In the latest episode, good friends Billy Eichner and Conan O'Brien once again get into Billy's past taking control of his own career amidst a changing culture, as well as the writing and making of Billy's first authentic gay rom-com, 2022's feature film Bros, which is about to hit theaters and streaming services at the end of September.

Eichner says he's unsure where his career would have landed without the help of the Internet. "If you see the movie, and I don't want to give it away, but I do speak to this at one point," Billy explains. Now almost 44 years old, Billy sees himself as being "in this interesting midway point between a generation of LGBTQ people and gay men specifically, who really saw the world change. When they grew up it was such a repressed time, a lot of them probably can't even imagine the world that we live in today. Even though there are still problems, and we're fighting for our rights still, the evolution that has occurred is really remarkable... there's a lot to unpack there."

"Then you have a younger generation now," he continues, "and you see them all over the place -- of LGBTQ people, and Gen-Z queer kids -- which is amazing, but they stepped into such a different world; such an evolved and accepting world. Again, a world where -- thanks to Clarence Thomas and other f***ed up homophobic, self-loathing weirdos -- we're still fighting for our rights and our rights are still very fragile. But, again that generation -- a lot to do with the Internet -- came of age in a time when things were if not easy, a lot easier. I'm kind of weirdly perched in between these two generations that have had a very different experience being LGBTQ, and I wanted the movie to speak to that in a way."

"By the way... I'm making the movie sound like f***ing 'Out Of Africa,' or something -- it sounds so f***ing serious! This is a funny Judd Apatow movie, everybody... It's 'Dinosaurs,' it's 'Sonic the Hedgehog,' it's everything you want it to be," Billy laughs. "But just speaking about it seriously for a moment, because it is a historic movie, you do have to acknowledge those generations of people. And Hollywood, especially -- an industry which has so often patted itself on the back for being progressive and 'gay-friendly...' -- but really when you look at the actual history of it, just voting for a Democrat doesn't mean that you are treating LGBTQ people correctly on the day to day."

Listen to the full episode -- now streaming on Audacy -- for more with Billy Eichner, including what he feels he owes to the iconic Joan Rivers, and don't miss their first conversation from back in 2019 right HERE, where Conan picks Billy's brain about his dream Billy On The Street guests, creating his own world in the industry, writing his first major gay romcom, and voicing Timon in the remake of The Lion King.