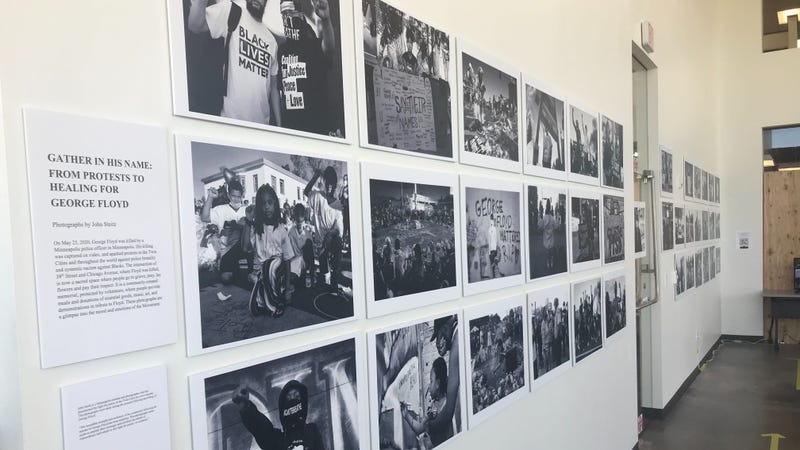 After having been closed down since March, the Minnesota African American Heritage Museum and Gallery reopened Tuesday afternoon with new exhibits documenting the George Floyd protests.

Floyd's death at 38th and Chicago in south Minneapolis on May 25th sparked protests and violence across the Twin Cities, which was captured by Minneapolis photographer John Steitz.

40 of Steitz's photos are featured in the new exhibit.

"The photographs capture the days after the killing of George Floyd," museum co-founder Coventry Cowens said. "The photos capture community reactions, observances, prayer, and the unrest that took place."

Minneapolis became the epicenter of history Monday, May 25 and in the days and weeks to follow. The job of capturing that history was one the museum undertook, despite being closed due to COVID-19.

"As soon as it happened, within 24-hours I was thinking 'The whole world is looking at this. They don't have anything else to but to look at this,'" Cowens said. "This opened the wound of systemic racism and the need for social justice to really be looked at, explored, and acted on. The world was watching and reacted."

While the museum works to preserve the history of Floyd's death, they have also taken time to remember the 1920 lynching of three African American men in Duluth.

On June 15, 1920 Elias Clayton, Elmer Jackson, and Isaac McGhie were taken from their Duluth jail cells and lynched by a white mob of thousands in the street. The trio of men, who were working with a traveling circus that was in town, were suspects in an alleged assault.

"The first thing people will see in the museum is a reckoning about the 100 year observation of the hangings in Duluth," Cowens said. "It almost runs a path right into George Floyd's killing."

The museum had planned on doing more with the City of Duluth regarding the anniversary, but the pandemic hampered any additional ideas beyond the exhibit.

Other George Floyd exhibits inside the Minnesota African American Heritage Museum and Gallery include:

The Minnesota African American Heritage Museum and Gallery is partnering with Save The Boards Minneapolis (“STB”) and Memorialize The Movement (“MTM”) to preserve the plywood art murals that were created after the killing of George Floyd and the subsequent protests.

Admission into the museum is free, but they ask guests to reserve a ticket online.