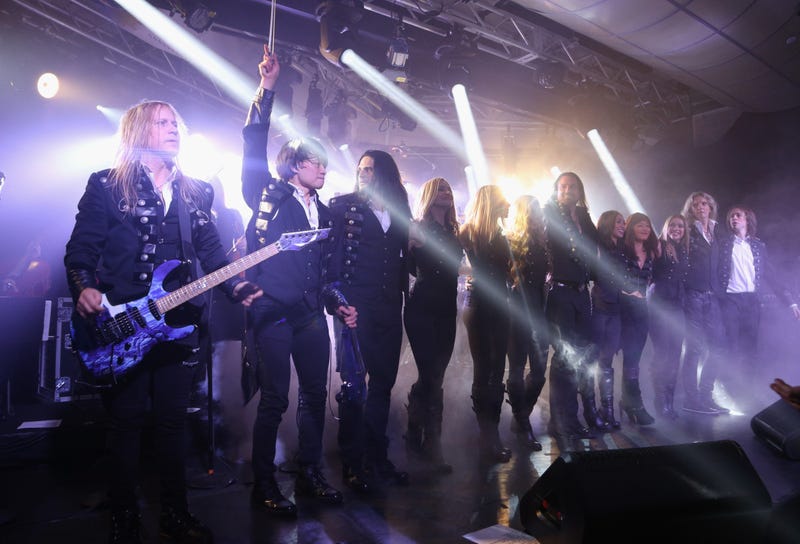 For the first time in over two decades, the Twin Cities and the rest of the world won’t get to experience the holiday majesty of the Trans-Siberian Orchestra live in concert.

However, you can still enjoy their guitar-driven, holiday show from the comfort of your own living room.

Al Pitrelli is the guitarist and musical director of TSO, and he talked to News Talk 830 WCCO 9:00-Noon host Cory Hepola about the show Thursday. Pitrelli has been a core member of TSO since their first album in 1996.

For the first time ever, #TSO will bring your favorite Rock Holiday tradition directly into your home!

Pitrelli said he was shocked to hear over the summer they wouldn't be doing live shows.

“This whole thing kind of tapped us on the shoulder earlier this past March," Pitrelli says. "I said I this will kind of pass and will be okay. And March turned into, you know, the whole year. So by August management said, listen, we have to cancel the tour. And that was one of those surreal moments. I was like, I don't understand.
We've never missed a show! We’ve never been late to a show. I don't get it.”

The story behind Trans-Siberian Orchestra has its roots in the obscure heavy metal band Savatage, who toiled away in the 80’s and 90’s barely getting noticed outside metal circles. Starting in the late 80’s, brothers Criss Oliva and Jon Oliva started collaborating with Producer Paul O’Neill, and moved beyond the heavy metal trappings of the 80’s, and started pumping out albums that were full-on Rock Operas.

Sadly, in 1993 guitarist Criss Oliva died when the car he was driving was hit by a drunk driver.

Enter Pitrelli, who would join the band on guitar in 1995 and go on to perform on albums Dead Winter Dead and Wake of Magellan as the band continued to evolve their sound.

The lasting legacy of Savatage, however, is forever tied to Trans-Siberian Orchestra.

TSO was a creation of Paul O’Neill who took vocalist Jon Oliva and keyboardist Robert Kinkel from the Savatage along with Pitrelli, and created something brand-new: aggressive, guitar-driven, rock music focused on the Christmas holiday.

Savatage already had recorded an early version of "Christmas Eve/Sarajevo 12/24" on their 1995 album, Dead Winter Dead.

In 1996, these musicians released TSO debut, Christmas Eve and Other Stories, still their highest selling album. “Christmas Eve/Sarajevo 12/24” was re-released and actually hit the Billboard Hot 100 charts in 1997 and 1998, launching the band to worldwide stardom. If, perhaps, you don't know the song by it's name, you'll surely recognize it when you hear it.

Each year, TSO would head out on the road over the holiday season bringing a combination of music, spoken word, and a visual spectacle to stages around the world to celebrate Christmas.

Pitrelli told WCCO that 2019 was a record year for the band on the road, and they were extremely excited to duplicate that success in 2020. Then, the pandemic hit.

“We did a million tickets last year and I was like, stoked for 2020," Pitrelli says. "I’m like, here we come, it could even be better! And then all of sudden, boom, no. And everybody is suffering just horrible loss and horrible hardship this year. I mean, we're all in the same boat together. So now we have the opportunity to at least come together and celebrate a tradition that's been so important to so many people for so many decades now.”

Pitrelli mentions that overcoming hardship is something the band has prepared for over the years.

“Paul O’Neill toward us years ago that when faced with something like this, you adapt. You overcome, you improvise, and you figure it out. We’re not gonna lay down to this thing. So the O’Neill's and management said, you know what? We're gonna live stream this one. I said I have no idea what that means but count me in. I want this more than anything because this is, you know, my family's tradition as well. I've been doing the same thing for 25 years.”

Pitrelli, 56-years of age and originally from New York City, has had a long and diverse career in the music industry. His first major label work was with Michael Bolton in the mid-80’s, something Pitrelli remembers fondly.

“I was kind of a nerd, and I buy a lot of records, and I'd always read the liner notes on the records. I got Michael's album is called Everybody's Crazy, and on the back of it I noticed that all the musicians that did the record were in other bands that were already touring. I kind of like scratch my head said, this dude doesn't have a touring band. So, making a bunch of friends of mine put a band together, learned every Michael Bolton song there. Was and annoying his manager for a month.
Let us audition to be his touring band! After annoying him for such a long time, he said come into the city and you guys can play and that'll be it. And we did just that and we played."

Pitrelli went on to work with groups like Alice Cooper, Dee Snider, and Megadeth, along with his time in Savatage and TSO.