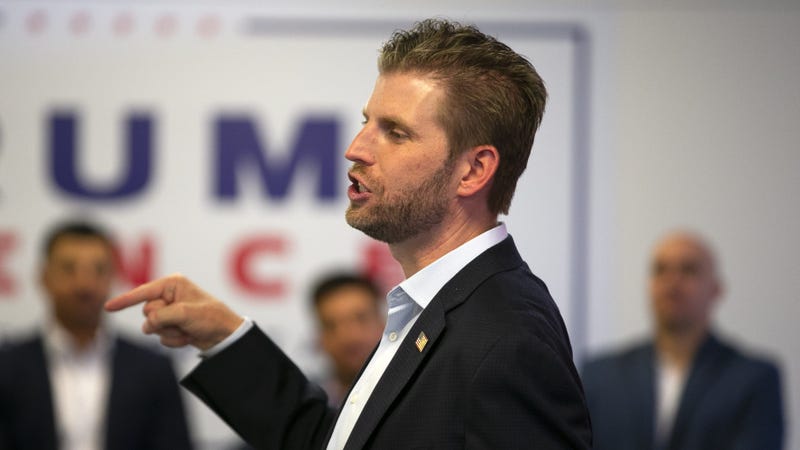 Eric Trump will visit Minnesota on Thursday afternoon less than 24-hours after his father, President Donald Trump, campaigned in Duluth.

Eric, the President's middle son, is holding a Make America Great Rally at rally Potter Trucking in Becker. His visit adds to what's already been a busy time politically in Minnesota.

"I think we can really turn Minnesota," Eric Trump told WCCO Radio's Dave Lee during the WCCO Morning News on Thursday. "We believe in working and actually showing up to the states. Half the states Joe Biden needs to win he hasn't even been in."

Trump said the campaign is feeling tremendous support all throughout the state, especially following riots and unrest this year in Minneapolis.

"Especially with what the city council is doing and defunding law enforcement there," Trump said. "We were very close to winning Minnesota in 2016 and I think we're going to win this year and make everyone incredibly proud."

Then Democratic-presidential nominee Hillary Clinton narrowly beat President Trump during the 2016 election in Minnesota. The state has not voted for a Republican president since Richard Nixon in 1972.

Eric Trump's visit to Minnesota also comes the same week as the first presidential debate. Changes are being worked on ahead of the second debate to be held October 15 in Miami according to the commission that oversees the general election presidential debates.

"I'd love to see more modern, actual moderators," Trump said. "Chris Wallace did a terrible job. Every question was dark and gloomy. My father had to fight two people, Wallace and Joe Biden."

"I've been the biggest proponent of seeing Joe Rogan host a debate," he said. "I think he'd do phenomenal and I think he'd be a more modern approach to the debates."

The president has been asked repeatedly about accepting the results of the upcoming election. Eric says election results will be accepted, as long as they're fair.

"All my father and all we ask for is a fair election. No cheating," he said. "The fraud has to stop. When we find a whole basket of ballots voting for Trump in a Pennsylvania drainage ditch, that's got to stop."

Jill Biden, wife of Democratic presidential candidate Joe Biden, will visit the Twin Cities on Saturday with a stop in Minneapolis. Jill Biden visited Prior Lake earlier in September.