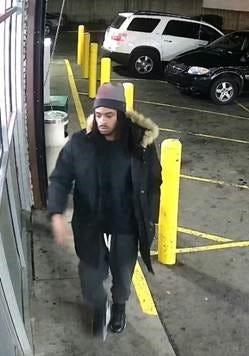 Minneapolis police are seeking the public's help in locating a suspect in a reported homicide that happened Wednesday.

A photo believed to be the was distributed by the MPD Friday afternoon, along with images of what may be the vehicle the person was driving

The suspect is described as a Black man in his mid-20's, medium build, about six feet tall with medium-length dreadlocks and a mustache.

Police say the man may be armed and dangerous.

The vehicle seen in the two photo is described as a dark-colored minivan, possibly a Dodge Caravan, with horizontal chrome door trim, and five-spoke rims.

According to police, a man was fatally shot on Wednesday at 626 West Broadway following a short verbal interaction with the suspect, who fled the scene in the vehicle.

Investigators say the shooting may have been a random act.

Police are asking that anyone seeing this man or the vehicle to call 9-1-1.