NEW YORK (1010 WINS/WCBS 880) -- Mayor Eric Adams declared a state of emergency Friday over the influx of migrants being bused to the five boroughs, saying the city is at "the edge of the precipice" as it expects to pay more than $1 billion this fiscal year alone, with a shelter population ballooning to record numbers and no end to the humanitarian crisis in sight.

“My fellow New Yorkers, we are in a crisis situation,” Adams said in an address as he declared the emergency and issued an executive order directing all relevant city agencies to coordinate their efforts to respond to the crisis and construct relief centers for the asylum seekers.

More than 17,000 migrants, mostly from South America, have arrived on hundreds of buses to the city from the southern border since April, many of them sent by Texas Gov. Greg Abbott and Arizona Gov. Doug Ducey, both Republicans. An average of five to six buses are arriving each day, with nine buses rolling into Manhattan on Thursday and another eight early Friday morning.

The city now expects to hit a record shelter system population on Friday. The system is currently housing 61,000 people, including almost 20,000 children, one in five of whom are asylum seekers. If the pace continues, the city’s shelter census will surpass 100,000 in the coming year, according to the mayor’s office.

“Once the asylum seekers from today’s buses are provided shelter, we will surpass the highest number of people in recorded history in our city’s shelter system,” Adams said. 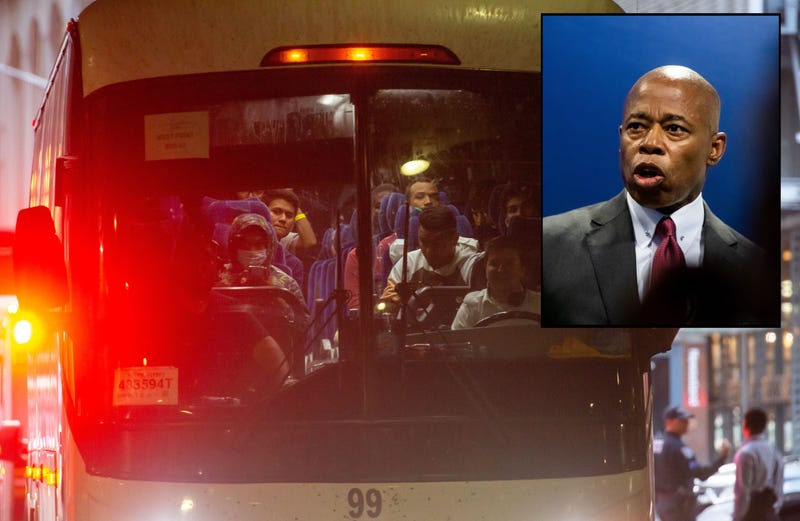 The mayor called for emergency federal and state aid to handle the influx as the city projects costs of more than $1 billion this fiscal year related to asylum seekers, many of whom are heavily reliant on government aid because federal law prohibits them from working in the U.S. He wants the federal government to expedite work permits, employ a decompression strategy to slow the outflow of asylum seekers from the border and put in place a resettlement strategy to move migrants to other cities.

Adams said New York’s legislature must provide emergency financial relief and the state government must help get more relief centers up and running. “This is an all-hands-on-deck moment, and we need the state to act with the urgency this situation demands,” he said.

The mayor said that the city has managed to open 42 hotels as emergency shelters, create navigation centers to connect asylum seekers with critical resources like health care, enroll over 5,500 children in public schools and more—all with virtually no coordination from the states sending them.

The city will open a relief center on Randall’s Island in the coming days to house hundreds of newly arrived asylum seekers. It will also take measures to accelerate the pace of moving long-term homeless people into permanent housing. While New York’s “compassion is limitless, our resources are not,” Adams said.

The mayor said national politics have created a crisis “that will affect everyone in this city.”

“This is a humanitarian crisis that started with violence and instability in South America and is being accelerated by American political dynamics,” Adams said. “Thousands of asylum seekers have been bused into New York City and simply dropped off, without notice, coordination, or care — and more are arriving every day.”

“This crisis is not of our own making but one that will affect everyone in this city, now and in the months ahead. New Yorkers deserve to know why this is happening and what we plan to do,” the mayor continued.

Adams said the city has assisted all of the migrants who’ve arrived so far but that “extending that care has come at great cost to our city and our people.”

“The asylum seekers arriving here need more than a hot meal or a bed for a night,” the mayor said. “Without the ability to work legally in this country, they need long-term shelter, health care and a great deal of institutional support.”

“It is straining the limits of our ability to provide care for New Yorkers in need, and it is burning through our city’s budget,” he said. “We expect to spend at least $1 billion by the end of the fiscal year on this crisis. All because we have a functional and compassionate system.”

“New Yorkers are angry. I am angry, too,” Adams said. “We have not asked for this. There was never any agreement to take on the job of supporting thousands of asylum seekers. This responsibility was simply handed to us without warning as buses began showing up. There is no playbook for this, no precedent.”

The mayor said the shelter system is now operating at “near 100% capacity,” an amount “far more than the system was ever designed to handle.”

“This is unsustainable. The city is going to run out of funding for other priorities,” he said.

Declaring the state of emergency will allow the city to build more relief centers and find more places to house the ongoing inflow of migrants. He said New Yorkers have been stepping up to help.

“Because, despite all the bad faith that has caused this crisis and made it worse, New Yorkers have always looked out for our immigrant brothers and sisters,” he said. “We see ourselves in them. We see our ancestors in them.”

The mayor recalled some of the city's greatest crises and said the city will rise to the challenge.

“As we did after 9/11 and Superstorm Sandy, we will rally together for the greater good in a time of unprecedented crisis,” he said. 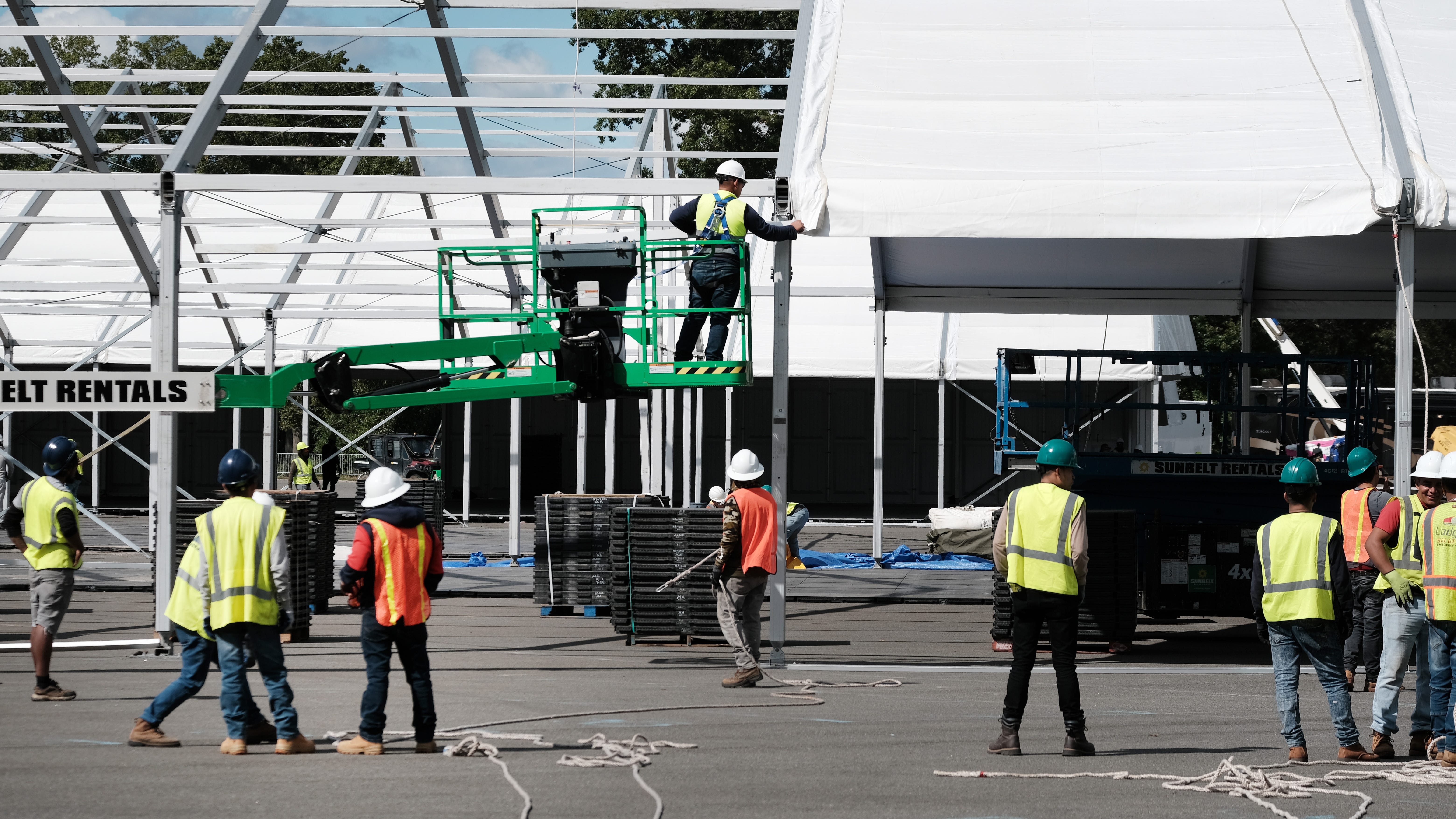 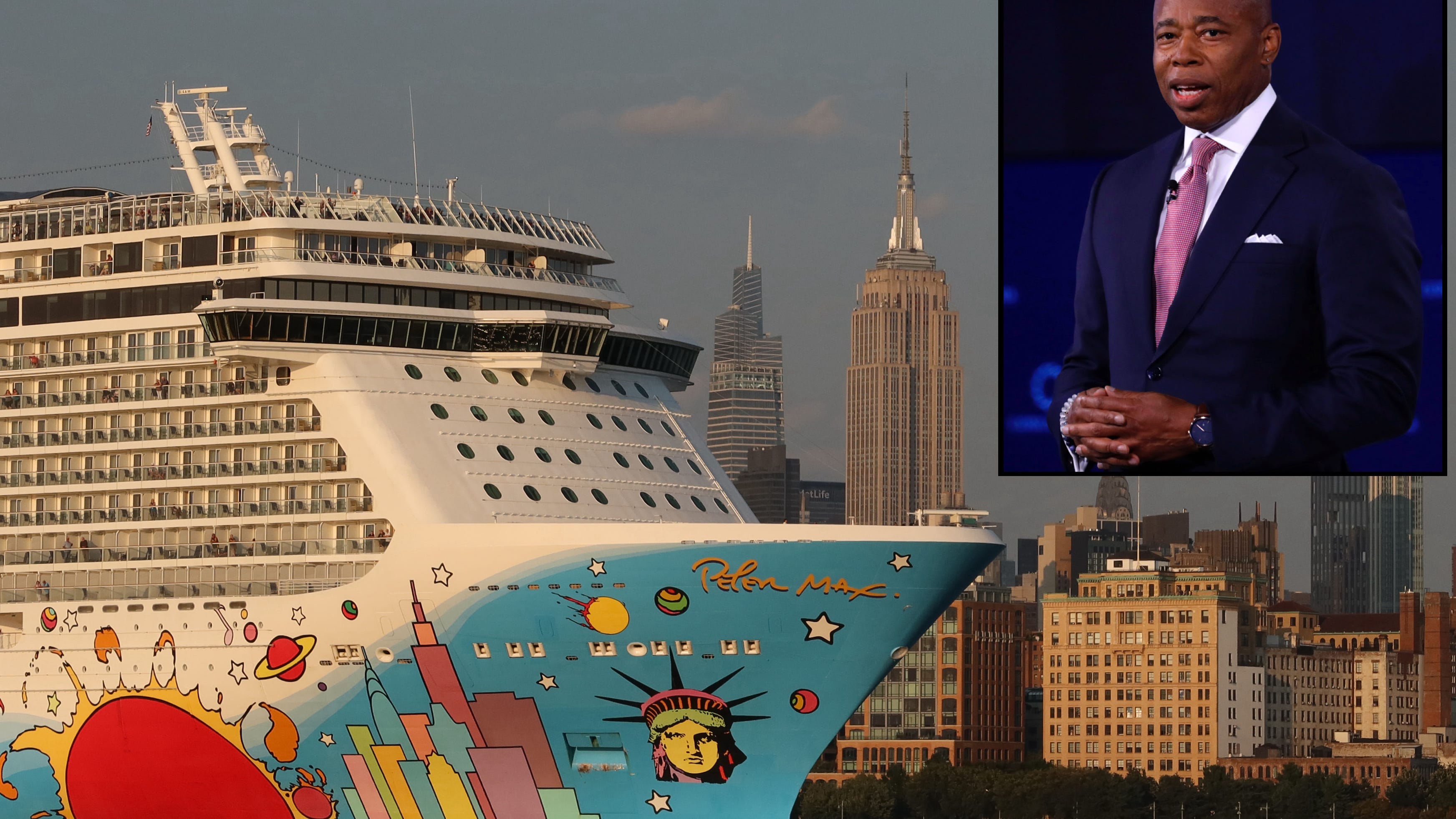