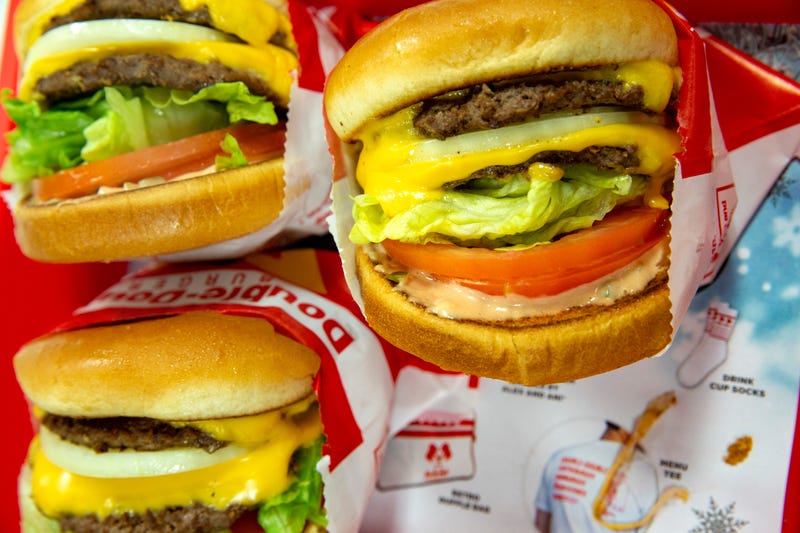 San Francisco's only In-N-Out Burger is closed for indoor dining because of the restaurant's refusal to enforce the city's COVID-19 vaccine requirement, representatives for the company and the San Francisco Department of Public Health confirmed to KCBS Radio on Tuesday.

The department said in a statement "public health inspectors had attempted multiple times" to get In-N-Out to enforce the vaccine requirement at its 333 Jefferson St. restaurant before issuing violation and closure notices on Oct. 14. Arnie Wensinger, In-N-Out's chief legal and business officer, said the Fisherman's Wharf location "properly and clearly posted signage to communicate local vaccination requirements," but the company "(refuses) to become the vaccination police for any government."

"We fiercely disagree with any government dictate that forces a private company to discriminate against customers who choose to patronize their business," he wrote in a statement provided to KCBS Radio. "This is clear governmental overreach and is intrusive, improper, and offensive."

Two months ago, San Francisco started requiring proof of vaccination for indoor restaurants, bars, clubs and gyms, among other venues, as the delta variant continued to spread throughout the city. A resident called the city's 311 line last month reporting In-N-Out was violating San Francisco's order, and city officials first visited the restaurant on Sept. 24, according to the public health department.

Public health officials visited again on Oct. 6, finding it was still violating the health order. They provided a notice of violation, the department said.

"Since then, public health inspectors had attempted multiple times to bring the business into compliance with the health order," the department wrote in a statement to KCBS Radio. "In-N-Out Burger had not complied by the time the final Notice of Violation and a Notice of Closure was issued."

The department didn't indicate how long its closure notice will last, or when In-N-Out Burger would be able to reopen for indoor dining if it agreed to enforce the city’s health order. Officials said the "vast majority" of restaurants are compliant.

Wensinger said in a statement that it was "unreasonable, invasive" and "unsafe" for the city to force restaurant employees to "segregate" patrons "into those who may be served and those who may be not, whether based on the documentation they carry, or any other reason."

In-N-Out Burger's opposition to the city's health order echoed the arguments of political officials and organizations who largely oppose vaccine mandates and have received donations from the company's top-ranking officials.

In 2019, a Business Insider examination of Federal Election Commission filings showed that In-N-Out COO Mark Taylor and his wife, Traci, donated more than $15,000 to former president Donald Trump and the national Republican Party over a three-year span beginning in August of 2016.

Trump said on the "John Fredericks Show" last month that vaccine mandates are unnecessary because "this thing is eventually going to go away." The Republican National Committee said last month it planned to sue the Biden administration over its executive orders requiring nearly 100 million Americans to get vaccinated against COVID-19.

In-N-Out Burger faced liberal criticism in 2018 for a $25,000 donation to the California Republican Party, but the company at the time pointed out it also donated to a pro-business Democratic PAC known as Californians for Stronger Jobs and a Better Economy.