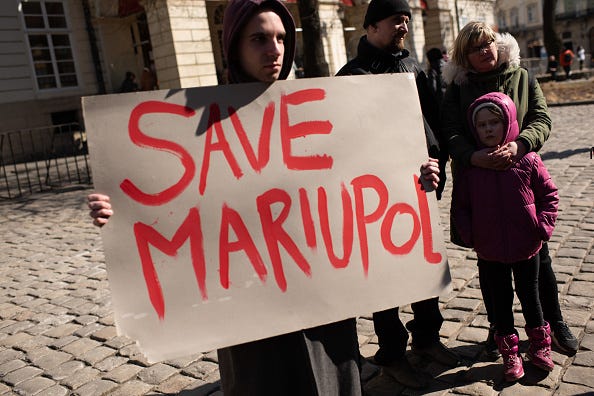 Ukrainians take part in an action in support of the residents and defenders of Mariupol on March 19, 2022 in Lviv, Ukraine. Lviv has served as a stopover and shelter for the millions of Ukrainians fleeing the Russian invasion, either to the safety of nearby countries or the relative security of western Ukraine. Photo credit Alexey Furman/Getty Images
By Joe Hiti, Audacy

Officials in the Ukrainian city of Mariupol shared on Saturday that an art school being used to shelter 400 residents was hit by Russian artillery.

The Mariupol City Council shared the news in its Telegram channel on Sunday that has since been translated, NBC News reported.

The council reported that the art school had "women, children, and the elderly" inside at the time of the shelling.

"It is known that the building was destroyed, and peaceful people are still under the rubble," the post added.

The city of Mariupol has been under constant fire throughout the invasion. On Sunday, the city council reported that approximately 40,000 people had fled the city in the past week alone.

Over 8,000 vehicles helped the evacuees flee their besieged city. Most of them were privately owned, traveling through a humanitarian corridor from the Ukrainian cities of Berdyansk to Zaporizhzhia, NBC News reported.

The vehicles were "under continuous fire" while fleeing Mariupol, the city council reported.

For the last three weeks, the port-city has been surrounded by Russian troops under constant bombardment of artillery strikes resulting in food, water, and energy supplies being cut off, NBC News reported.

The local authorities shared that there have also been at least 2,300 people killed, with some of them being buried in mass graves with no other options.

Russia has received mass amounts of criticism for its siege of Mariupol as Ukrainian President Volodymyr Zelensky shared on Sunday that it would go down in history for the war crimes Russian troops committed there.