Detroit, Mich. (WGR 550) - The Buffalo Bills got back in the win column on Sunday after two-straight losses, beating the Cleveland Browns 31-23 at Ford Field in Detroit.

That means I can go back to starting with my Arrows Up: 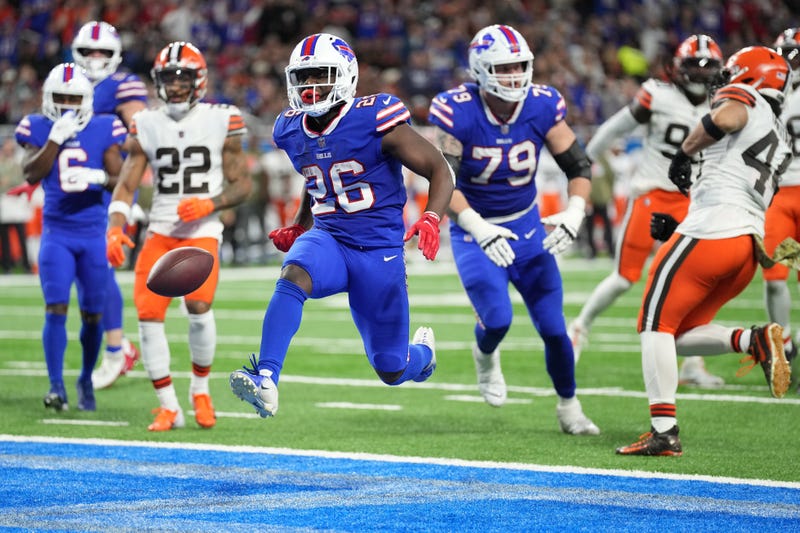 Milano was absolutely incredible all game long, finishing with 12 tackles, including three for loss, a sack, and a fumble recovery, and a quarterback hurry.

As usual, he just seemed to be in the right spot to make a play all game long.

Browns running back Nick Chubb came into the game third in the NFL with 904 rushing yards and fourth among all running backs, averaging 5.65 yards per-run.

The Bills held him to just 19 yards on 14 carries, for an average of just 1.4 yards per-run. Chubb had a 12-yard carry, and otherwise had seven total rushing yards on 13 attempts.

Josh Allen after two-minute warning of first half

For all of Allen’s struggles in the first half (see later), he quickly turned around after the two-minute warning, making several key throws, including a 28-yard strike down the field to Gabe Davis and a touchdown in the back of the end zone to Stefon Diggs.

From the first half two-minute warning on, Allen was 14-of-17 for 170 yards and a touchdown.

The Bills played it perfectly at the end of the first half and into the second half when they got the ball with 1:54 left and used all but 14 seconds before scoring a touchdown to take their first lead of the game, 13-10.

Then they grabbed the opening second half kickoff and went down the field for a field goal to make it 16-10.

On the Browns' first drive of the second half with the Bills up just 16-10, Cleveland had the ball at Buffalo’s 27-yard line, facing a 3rd-and-1. They ran a quarterback sneak and got stuffed at the line of scrimmage, setting up a 4th-and-1.

Browns quarterback Jacoby Brissett did the exact same thing, and again, the Bills defense stopped him cold. Turnover on downs, and a huge swing, as the Bills took the ball and drove for another touchdown to extend their lead to 22-10.

With the Bills up 22-10 late in the third quarter, Cleveland had a chance to cut its deficit to nine points with a short field goal. However, Jones did a great job to get his hand up and block it.

The Bills kicked a field goal of their own on the next drive for, what amounted to, a six-point swing.

The Bills kicker tied his own franchise record he set in 2020, also matched by Steve Christie in 1996, with six total field goals.

Bass came up big with a long 56-yard field goal that had plenty of distance and followed it up with a 49-yarder.

The Bills got the run game going outside of Allen.

Hines got a ton of hidden yardage for the Bills, returning two punts for an average of 18.5 yards a return, and three kickoffs that averaged 25.3 yards per-return.

The Bills offense did not turn the ball over at all on Sunday. A huge difference from the last several weeks.

Martin only punted twice for the Bills this week. He averaged a booming 49.5 yards per-punt, pinning the Browns at their own 11-yard line (after a penalty) and their own 10-yard line.

Oliver seemed to be in the Browns' backfield either making plays or helping others make plays all day long, finishing with five total tackles, including three for a loss, and a quarterback hurry.

What a difference it was having Poyer back on the field for the Bills. He was in on several key plays, which included five total tackles, a quarterback hurry, and a pass breakup.

Knox deserves an Arrow Up for his performance, but just his involvement in the offense does, as well. He was targeted seven times, catching all seven passes for 70 yards, including a 23-yarder.

All of those are season-highs for him.

The Browns converted their first two third downs, but after that, were shut down by the Bills. Cleveland was 2-for-9 the rest of the way, ending 4-for-11 (36.4%) on the afternoon.

The Browns were in the Bills' red zone four times and scored two field goals for only a 50% conversion rate.

Whatever the Bills defense did at halftime, it worked.

In the first half, Cleveland had 210 yards of offense. On their first three drives of the second half, the Browns totaled just 49 yards.

For only the second time this season, the Bills won the opening coin toss. The Browns were the road team, and they called heads. It was tails.

The Bills deferred, and for the first time this season, started the game on defense. 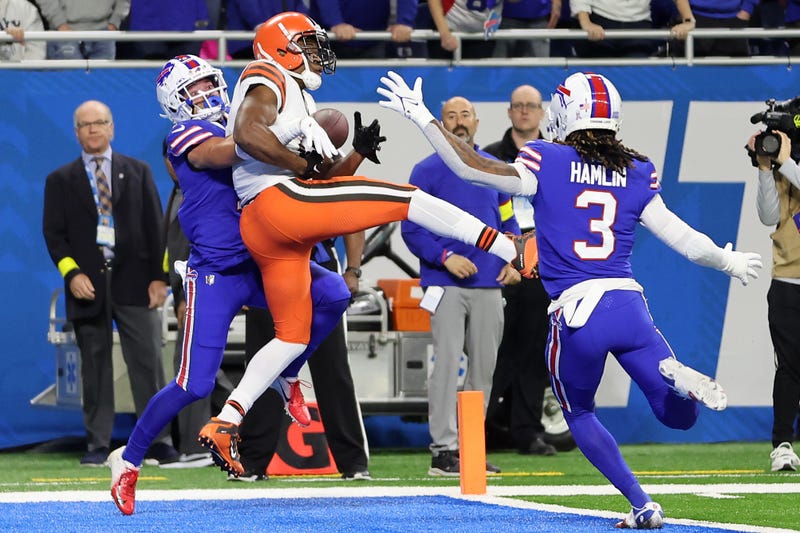 Browns receivers had far too good of a day on Sunday.

Several times, both Bills cornerbacks seemed to have very good coverage, but didn’t get their heads turned around fast enough to make a play on the ball. That allowed those Cleveland receivers to make the grab, and often for critical, big gains.

Dodson was solid against the run, making a game-high 13 total tackles. However, the Browns attacked him and his zone several times while throwing the ball.

Early third-and-long situations given up

On the first drive of the game, the Bills gave up a 3rd-and-11, and then another 3rd-and-11. They forced Cleveland into exactly what they wanted, but were unable to close the door on those three long situations, allowing drives to be extended.

The Bills quarterback was off through most of the first half, struggling to hit receivers with several passes and sailing balls over their heads.

Prior to the two-minute warning of the first half, Allen was just 4-of-10 for 27 yards.

The Bills did not gain a first down until their fourth drive of the game, ending their first three drives after three plays each, and with two punts and a field goal.

Lack of Stefon Diggs in the first half

Diggs caught only one pass in the first half. It happened to be for a touchdown, but the Bills offense was stagnant, and their No. 1 receiver wasn’t involved.

That’s not a coincidence.

The Browns ran several screen passes and had a lot of success throwing them to running backs Chubb and Kareem Hunt. The two combine for five catches for 70 yards.

Long plays given up

The Bills defense gave up seven plays of, at least, 20 yards, including six pass plays and one Jacoby Brissett scramble.

The Browns did a very good job throwing the ball against the Bills, with Brissett completing 28-of-41 passes for 324 yards and three touchdowns.

The Bills were flagged eight times for 89 yards, which is far too many for too much.

The Bills' red zone struggles continued, as they converted only two of their five chances (40%) for touchdowns when they got inside the Browns' 20-yard line.

Photo credit Outlet Liquor
We strive to be a platform where varying opinions may be voiced and heard. The views, thoughts, and opinions expressed by the author(s) of this article and/or by those providing comments are theirs alone, and do not represent those of Audacy, Inc. We are not responsible for any damages or losses arising from this article and/or any comment(s).
Featured Image Photo Credit: Lon Horwedel - USA TODAY Sports