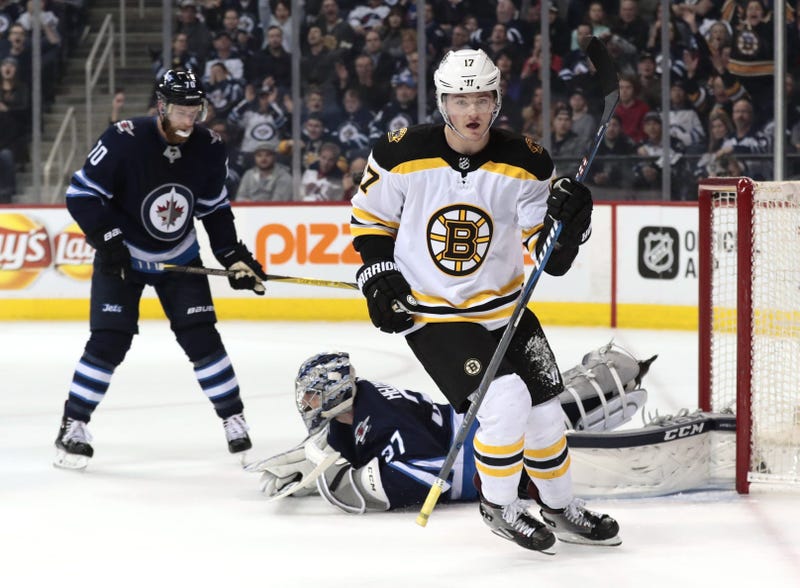 Panicking any time before around 6:57 p.m. Thursday, when lineup sheets are officially posted, is an absolute mistake. But if Game 1 goes on as scheduled and Bruins rookie Ryan Donato is not in the lineup, which currently appears to be the case after Donato skated as the spare forward Tuesday and Wednesday, I would have some questions.

None of which simpler than, “Why?”

Rick Nash, on the shelf for the final 12 games of the regular season, is set to make his return and skate on the right side of a highly effective second line with Jake DeBrusk on the left side and David Krejci in the middle. The 33-year-old Nash recorded three goals and six points with the Bruins prior to his concussion, will also go right back to manning the role of net-front body and smooth finisher on the Bruins’ first power-play unit. The 21-year-old Donato skated in both of those spots while filling in for Nash, so there's another body there.

That was one of the reasons Bruins head coach Bruce Cassidy gave when confirming that Donato could indeed be in the press box as a healthy scratch for Game 1.

But it seems beyond silly to sit here and suggest that it’s somehow unheard of to have two capable scorers dressed at the same time. Especially when you’re replacing a player battling through concussion issues (who's to say that the worst-case scenario doesn't come with Nash not feeling 100 percent and having to leave Tuesday's game early?) and talking about a series against a Maple Leaf team that gives teams absolute nightmares with their ability to balance their scoring on three different lines. Seriously, the Leafs put Auston Matthews on one line, a ridiculously powerful Patrick Marleau-Nazem Kadri-Mitch Marner trio on another, and let James van Riemsdyk log third-line minutes.

Speaking to the strength that comes with that sort of balance, it’s worth mentioning that only the Jets and Lightning scored more goals than the Maple Leafs this year.

Toronto’s power play has clicked at a league-best 45.2 percent success rate since March.

If there was a series for the Bruins to load up on their offensive firepower, this is it.

It’s not as if the Bruins are doing that with their current line three, either, which will feature Noel Acciari between Danton Heinen and David Backes. (Riley Nash, injured in a Mar. 31 win over the Panthers, has been officially ruled for Game 1, and has been labeled an early ‘maybe’ for Game 2.) Their fourth line will remain an energetic group of ish-disturbers -- Tim Schaller, Sean Kuraly, and Tommy Wingels look like the combo there -- but there’s not a ton of expected finish.

Donato, meanwhile, burst onto the NHL scene with five goals and nine points in 12 games. Only Patrice Bergeron, Brad Marchand, and David Pastrnak scored as many or more points among Boston skaters since Donato made his debut on Mar. 19. League-wide, Donato’s nine points put him in the Top 50 among all NHLers. But those totals also meant that Donato had direct involvement in nine of the B’s 33 goals scored upon his arrival, giving him a 27 percent involvement in their total scoring.

Sitting that off the bat, especially when the Bruins have been plagued by poor starts in recent weeks, seems like a mistake in a series built for 5-4, 4-3 games opposed to the 3-2, 2-1 games you would have prepared for in a first-round matchup with the Devils. I’m not of the belief that it’d be better to lose a game by a 2-1 final than a 5-2 final this time of year, nor do I believe that Donato would be truly swimming as a defensive-zone nightmare if on the right side of a third line featuring Backes and Heinen, for instance.

Again, if there was a time to beef up your bottom-six scoring, it seems to be in the now.

So, any other reasons?

“The last part of it is how many young guys do you think can go into the lineup at once and can we sustain our level of play because it is the second season?” Cassidy said. “We factor all of those in, and that’s where it’s going to come down to.”

True, the Bruins will already have three skaters making their Stanley Cup Playoffs debut in their projected Game 1 lineup. But on their march to a Stanley Cup in 2016, the Penguins dressed six different rookies (or players making their playoff debut) in their lineup. They were able to mix and match the young guns with capable veterans on that run, and it obviously paid off as the rebirth of Pittsburgh’s dominance. They added another two rookies to the mix in 2017, too, and once again those players shined on the road to another Cup.

The Bruins have that same Penguin-esque core in place with a Bergeron, Krejci, Backes, Zdeno Chara, Adam McQuaid, and more. That means that a similar move from Cassidy would not be their undoing, and it were, that’d go against one of the biggest reasons why everybody was OK with the Bruins giving $30 million to Backes in 2016.

Fearing rookies -- or thinking that they’re not capable, for that matter -- should no longer be a thing in this league. Not when you’ve seen how they’ve been able to perform this season, where the league has trended in a speed-out-the-wazoo game, and given the opponent the Black and Gold will go up against in this opening round.

“They’ll be disappointed," Cassidy said of players sitting. "But [we have told them] just make sure you’re ready to go ‘cause the lineup isn’t set in stone from one game to the other.”

Let’s hope that latter part holds true, ‘cause this is a series that could use No. 17.