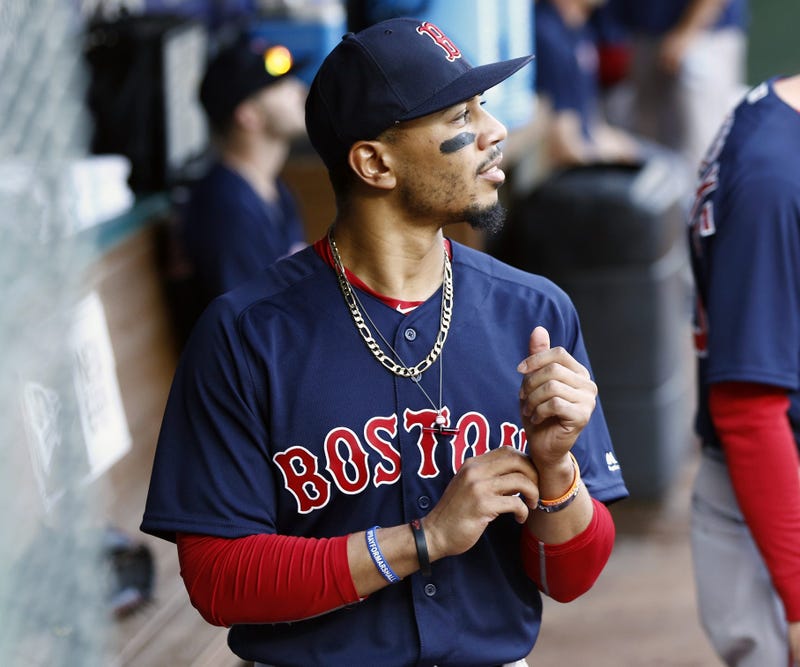 NEW YORK -- It would seem to be an important exercise to check in on Mookie Betts' contract situation every once in a while. When you're dealing with one of the perceived best playeres in baseball (who seems to only be getting better), with a potentially franchise-defining financial commitment awaiting him in just a few years, such conversations are pertinent.

So before Tuesday night's series opener against the Yankees, we did exactly that -- asking Betts to confirm that he hadn't come off his strategy of not talking contract extension during the season.

"Everything is exactly the same," he told WEEI.com, referencing his stance on not negotiating in-season. "Nothing going on."

It's not surprising, but it also certainly doesn't make the Red Sox side of things feel all that comfy and cozy while trying to decipher the team's financial future.

In years past, the Red Sox have been really effective in finding in-season, long-term extensions for their foundation players. Both deals involving Josh Beckett and Dustin Pedroia were locked up smack-dab in the middle of the season, with Jason Bay also agreeing to a July deal before the team's medical staff negated it. Then you have players like Jonathan Papelbon, who was always intent on betting on himself all the way to free agency.

This one is different.

Betts will be eligible for free agency after the 2020 season, having already set an arbitration record with his $10.5 million payday for 2018.

Two years ago, Betts' extension possibilities were being linked to players like Christian Yelich, who agreed to a seven-year deal with the Marlins worth at least $51 million. Now we've morphed into comparisons with the Mike Trout contract. The Angels bought out all of Trout's arbitration years via a six-year, $144 million deal, eliminating the outfielder's previous opportunity to hit the free agent market after the 2017 season.

Now? Think Jose Altuve's new deal ... and then some.

The Astros second baseman agreed to a seven-year, $163.5 million, with a $20 million signing bonus. Why should we care when talking about Betts? Beside the obvious money commitment, there are some elements in Houston's deal that should be viewed as trends.

From the team perspective, the Red Sox would be looking to do a deal with Betts that finishes his final season no older than his 35-year-old season. It's no coincidence that the deals for Altuve, Eric Hosmer and J.D. Martinez run through their age 34 seasons.

And while there is some sense of player security when it comes to Altuve's deal, let's make no mistake about it: He got paid. Folks can talk about the uncertainty of the free agent market after last offseason, but when it comes to players like Betts, that shouldn't be a concern. His camp knows that. It's why we're still sitting here with no extension in sight. And because of this reality, such deals are no longer viewed as the payroll-savers they once were.

"I think a couple of things have changed. One, the scale of these deals — the pre-arb and first-year arb deals — there were some that are still in that mid-tier range," said Rangers president Jon Daniels. "Ten years ago if there was an injury or you made a mistake in your evaluation or the player took a step back for whatever reason, the deal was small enough that it didn’t really kill you. Now these deals are $40 [million], $50 [million], $60 [million]-plus, especially guys wh have two years. Those are real dollars. I think it’s reached a point, at least in our estimation, that there is a little more risk involved."

With Betts, it would seem to be a risk worth taking. That doesn't mean it wouldn't be appreciably more uncomfortable then previous Red Sox contract extensions.

By the time the Red Sox would have to face Betts' free agency, they will have had to already defined which players they were ready to go all-in with. Craig Kimbrel. Chris Sale. Martinez. Xander Bogaerts. Rick Porcello. Potentially David Price. All are big-ticket items they are going to have to replace or commit big dollars to.

And the longer the Betts saga goes on, the more difficult it becomes to pay proven anchors for those roster spots without blowing through the most uneasy luxury tax thresholds.

"For a variety of reasons, you don’t want to sign a bad deal because it handcuffs you and it’s sort of a Scarlett Letter, and I think the agents look at it the same way," Daniels said. "It’s just a matter of finding that sweet spot that makes sense for both sides."

For Betts and the Red Sox, that window may be slowly closing with each passing day.