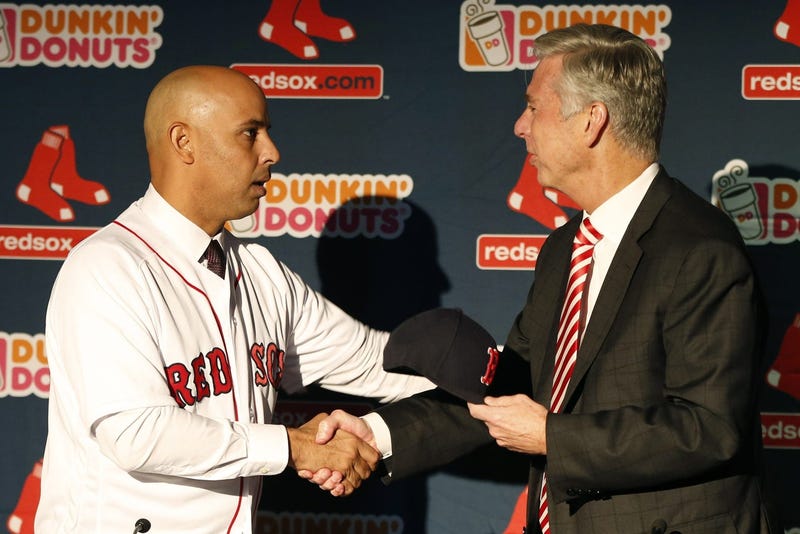 FORT MYERS, Fla. -- Steve Langone had gotten used to it. Five years will do that.

Three or four times a week, the former Boston College baseball standout would get on a plane, trying to catch that next team, that next city. His job was to be where the Red Sox weren't so when they did get there, there was some expectation of what was to come. He was their advance scout.

"I would sometimes be home one or two days a month," Langone said. "You look at how many cities you're in, how many ballparks you're in, night game, day game. You look back and think that was a lot. But during the season you kind of get on automatic pilot with it. You know your schedule, you have to get your work done. You have to get up early to get on a flight, fly to that next city, do a conference call that afternoon, start work on the next team. The craziness of it once you organize it and you know what you're doing, it doesn't seem that bad when you're in it. But looking back you think, 'Man, that was kind of crazy.'"

Langone didn't seem to really mind. He was still in his 30's, collecting boatloads of frequent flier miles while playing an integral role in the Red Sox' success. But times change, as do job descriptions. That's what he was reminded of shortly after the introduction of new manager Alex Cora.

As part of his job interview, Cora had made it clear that there was a way he preferred to operate when it came to preparing for opposing teams. It was the Houston Astros' way. It was also a way that seemed to scratch where the Red Sox' itched when it came to their own desire to evolve from what had been.

So, with Cora's ideology in place, Dave Dombrowski pulled Langone aside. The Red Sox were going to try something a little different.

Long considered at the forefront of analytics and scouting, the Red Sox had fallen behind. And part of that was how they executed their method of preparing for opponents. Under Terry Francona and Bobby Valentine, the team rotated the likes of current pitching coach Dana LeVangie and another scout, with one of the two on the road while the other looped back to deliver the information in-person to the Red Sox. Then John Farrell chose to use a one-man system -- as he had when relying on current Rays manager Kevin Cash as his advance guy in Toronto -- with Langone serving as the advance man.

The Red Sox had always done it this way.

"It's been driven in the past by the comfort level of the coaching staff and the kind of information they're looking for," explained the team's vice-president of baseball research and development Zack Scott. "If you think about it, other than the 2012 season the staff has been pretty similar in mindset and routine. This is the first time we've had a drastic turnover and people coming from other organizations who are very analytically oriented."

But while the Red Sox were locked into this method of preparation, baseball changed. Entering 2018, it is estimated that fewer than 10 teams actually send the Langones of the world out on the road. The priority is now delivering what can be an overwhelming amount of information. And that's why the Red Sox are changing.

Scott came to the Red Sox in 2004, joining an organization whose analytics department was built on the advice of consultants such as Bill James, Voros McCracken, and Scott. A year later, he would become the first full-time member of what wasn't even considered an official department. In 2009, Tom Tippett (the creator of the well-publicized database system "Carmine") jumped aboard and the duo started to ride an analytics wave that became next big thing in baseball.

But keeping pace was often easier said than done.

While Red Sox ultimately added baseball operation analysts Gregory Rybarczyk and Joe McDonald in 2014, other teams were not only growing their analytics departments faster, but were also prioritizing using the information in preparation for opponents to a much higher level than the Sox. Boston's primary motivation was leveraging the analytics to evaluate talent rather than game strategy.

When the 2017 World Series rolled around, you had one team which possessed the largest analytics dept. in the Dodgers (employing approximately 20 people), and another, the Astros, who were considered on the cutting edge of utilizing information. The Red Sox? Well, they were ready for a change.

Cora gave them a push.

"These guys had exposure to stuff we hadn't really done," said Scott. "And the main reason we hadn't done it because it's very routine oriented. They were comfortable with their routine and maybe we would do little tweaks here and there. But I was the advance [scouting] intern in '04 and it's been tweaked, but it hasn't changed a whole lot. This is the first time we have really overhauled. The other reason for why it's changing is the different kind of data that we had. The explosion of data has provided more opportunities for this sort of stuff. So in some ways, we're kind of behind some other teams in using our analytics staff in this area.

"I told [Cora], 'We have work to do in that area. I'll be honest with you, we haven't been doing that. There wasn't as much demand for it.' We've never been an organization that wants to force people do something because that's not really effective. And we only had two or three analysts so I wasn't going to allocate resources when there wasn't much demand. We were very capable of it, we had done some of that stuff but really hadn't delivered it."

A change was in an offing.

The Red Sox started with bolstering their analytics group, increasing the full-time staff to 10 people, plus part-timers. Then comes the next-level information, the kind that simply wasn't part of the equation in 2017. For instance, those dots on a spray chart used to help direct defensive positioning will be viewed in a manner never previously contemplated by the Red Sox.

"The process of defensive positioning is going to be vastly different," said Scott, who explained each hit is going to now be analyzed not just by location but also optimized by such elements as the pitcher, the batter, the range of the fielders. It's the kind of information that was previously not delivered to the major league coaching staff. "What that opens your eyes to is how hard it is to interpret the dots on a spray chart. The number of batted balls you care about becomes smaller and smaller.

"A lot of coaches in the past have preferred to compile the information themselves. Alex told me he doesn’t want his coaches to have to process information but prefers they spend more time coaching and allow the computer to handle that. We want to free them up to focus more time on the most important thing."

And the alterations stretched beyond just beyond the big league club, with the organization set to pass on these analytical strategies to their higher-level minor-league clubs. No more will shifts in the high minors become some general exercise. There will be a detailed impetus for each defensive alignment, using the same algorithms as the major leaguers.

WHAT NOW FOR STEVE?

Langone had traveled with the Red Sox before, passing on the advance scouting to LeVangie and Mike Cather during the 2012 campaign while sticking with Valentine's staff. But considering the miles piled up, that probably seems like a lifetime ago. Well, he's about to be reintroduced to the team charter.

Langone is still considered the advance scout, it's just that he will be doing the job a whole lot different.

While with the Red Sox, the former minor-league pitcher will collect the analytical information from Scott's team, while joining his assistant, J.T. Watkins, in breaking down what can be a massive amount of video, in order to put in one digestible information stew for the coaches and players.

Before it was conference calls with the coaches and they took it from there.

"I'm going to miss traveling on my own. I kind of enjoyed that. But I'm looking forward to being where the action is," Langone said. "The direct communication with the players and the coaches, along with being in the advance meetings rather than being a voice on a conference call for 35 minutes twice a week. Now every day there is going to be communication with the coaches and I think that's going to be a benefit of the process."

One of the challenges for Langone will be sifting through the information in a manner that can be accepted by both the coaches and players. The good thing is that most of Cora's staff has a history with such a process, with the new manager clearly ready to encourage an acceptance of the newly-uncovered resources.

"[Cora] made it very clear that he fully bought into the stuff they were doing in Houston," Scott said. "None of it is perfect. We're still going to get beat on shifts. That's going to happen. But better to do it based on data rather than a subjective video look on a small sample of video, because you can only watch so much.

"For our department, it’s exciting. Employees in any company want to make an impact and we’re no different. And there’s no better opportunity for us to help accomplish our mission than to support our coaching staff and provide information that will be utilized directly on the major league field. So yeah, it’s exciting. That’s why we’re allocating most of our analytical resources at this time for this work. I’m fired up about it."