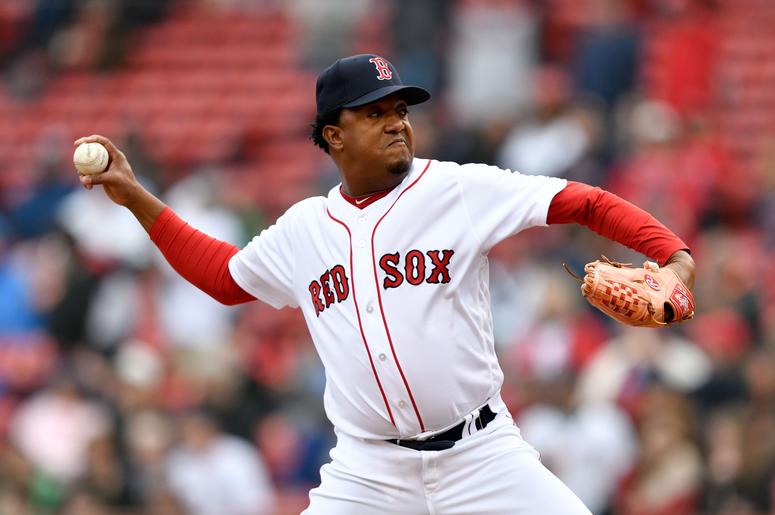 NEW YORK -- Pedro Martinez was, and is, great.

He was a once-in-a-lifetime experience on the mound, is a joy to listen to any time he opens his mouth and is about as good an ambassador to the game of baseball as there is.

But Pedro's current existence is uncomfortable. Maybe not for all, but for some. At least it should be.

Let's start with what we're about to witness Monday night. Luis Severino. While being paid by the Red Sox as a special assistant to the president of baseball operations Martinez basically remade the pitcher who may be standing in the way of his organization advancing past the American League Division Series. It has been well-known that the Yankees' Game 3 starter credits the former Red Sox great for teaching him how to be an ace.

For some context, this would be like Jason Varitek -- who carries the same title as Martinez -- improving Gary Sanchez's ability to block balls. Doesn't feel quite right, does it?

To Pedro's credit, he doesn't shy away from the topic. He is very secure in what he did, how he did it and when he did it when it comes to Severino.

This is how he explained it when appearing on WEEI in February:

"To me, no and I’m going to say this in a personal way: I feel like once I retired, my duty with society, with baseball, the best gift I can actually supply for baseball is my knowledge, my experience, my own way of doing things easier for all the players. I think it’s our duty, believe it or not. I don’t know if many people would be brave enough to express this, but our duty is not to really to keep it within and within the organization either, it’s to pass it along.

"We all talk in life in all sorts of life, we talk about passing along the good things, passing along the good experience, passing along the hugs and the good feel for everything that you do, passing along the support. So for me, I feel like anybody, and it doesn’t have to be Severino. Like this year, I’m going to be point blank open. I had Severino, I had [Mets pitcher Hansel] Robles, I had [Jeurys] Familia, I had like six or seven of them that I actually work with, including another kid [Carlos] Carrasco from Cleveland. I stopped Cleveland in 1999 in the postseason but who will ever figure out that I will be helping one of the pitching stuff in Cleveland?

"You know, I get all kinds of players coming over asking. Ervin Santana, who actually got to revive his career at the end, Fernando Rodney, those are guys that I interact with. Anything that I can do. But I think, our duty as retired players and players that have been through the game and had some success in the game is to pass along what we learned, how we did it, how it worked for us, just in case it works for them. And Severino is one special guy, because Severino ever since he signed, the picture he had was my baseball card hanging on his locker all over. The video he would look at on his phone was my video, every single day. I was his idol because he was young and he got to see me actually in my prime and I was the one he fell in love with. He didn’t know he was going to sign with the Yankees when he was watching me. So he fell in love before he signed with the Yankees and as he became a Yankee, he wanted to do things like me. As a matter of fact, it must be great to be good because the little things that I relayed to Severino, who deserved all the credit, it seems like are falling to me but in reality, it’s Severino doing it and adjusting to little things I thought I could correct."

When asked about the relationship Sunday, Severino struck the same tone.

"It's not about he's in Boston, and I'm a Yankee. In the offseason, we're humans," he said Sunday. "He's a great pitcher. He was a great pitcher, Hall of Fame. So when somebody like that offers to help you, you don't say no to those kinds of people."

OK. Fair enough. But that doesn't make it any less uneasy. And it's not only the Severino thing that seems a bit off in this relationship with the Red Sox.

Martinez has done a lot in terms of helping pitchers in this organization. He is respected and valued. So much so that all it takes for him to put a uniform back on and get an hour-long, one-on-one audience with Red Sox starter just two days before the pitcher's start is a phone call. Even though such a middle-of-the-season dynamic seems a bit odd -- as was the case when Pedro encouraged Nathan Eovaldi to land on his toe instead of his heels -- it is his team. That's what at least part of the paycheck is for.

But then comes along an appearance on national television where Martinez is insinuating Chris Sale's return was pushed along by "medicine" (which most would surmise meant cortisone). Or the proclamation that he has knowledge that Severino was pitching hurt in the second half because the Yankees' pitcher told him so.

"I didn't know until I finally spoke to Severino that Severino wasn't totally healthy, and they could not afford to stop him from pitching," Pedro said on TBS. The pitcher's response? "I don't know where he got that, but I didn't say nothing about I was hurt," the Yankees righty said. "If you hear that from Yankees staff or something like that, maybe you can believe it, but I don't know where you get that from. Like I always say, I care about my arm and being healthy. So I'm not going to go out there and compete if I'm not healthy."

There are other bits of uneasiness.

Martinez' very public analysis of his own team and its own players is a bit weird. Something we were reminded of after David Price's Saturday start.

This isn't a unique scenario in some sense.

Alex Rodriguez analyzes games on ESPN while serving as Brian Cashman's special adviser. Roger Clemens does it for Houston's Jeff Luhnow. But it's hard to imagine a world where Rodriguez's tutelage altered the career path of Xander Bogaerts or dropped private injury information passed along by a Red Sox player.

It is what it is. I want to continue to enjoy Martinez the baseball television analyst. I applaud the spirit of wanting to help young players.

But when Severino is setting down the Red Sox Monday night with an arsenal fine-tuned by Pedro, well, it's just a little weird.