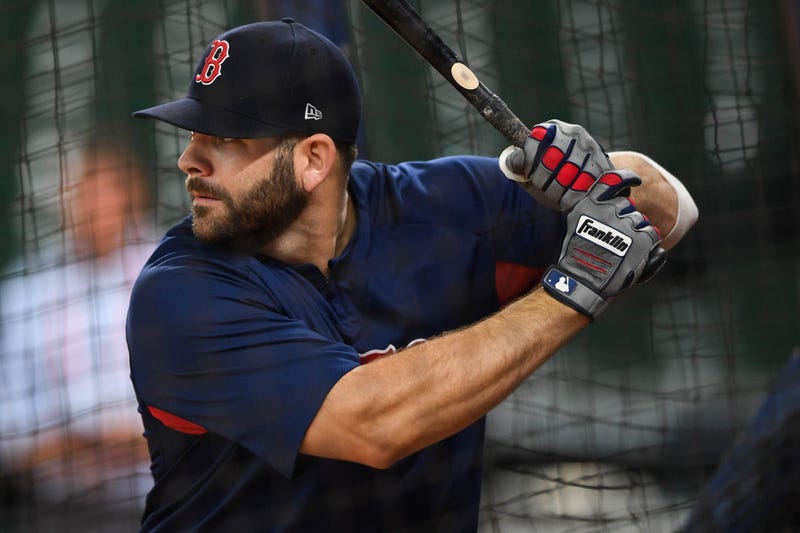 FORT MYERS, Fla. -- Want to know why Mitch Moreland is here, and not preparing for accommodations in some free agent workout across the state? Listen to how the first baseman's 6-year-old son responded upon his father landing for another spring training at JetBlue Park.

"He's fired up," Moreland said in a sit-down interview Tuesday afternoon. "Yesterday, as soon as I got on the phone with him he said, 'Have any of the guys asked about me?' He's excited about it."

And there you have it.

Moreland has found himself back with the Red Sox on a two-year, $13 million deal. Perhaps a modest payday in many offseasons, but in this one? He hit the jackpot. The first baseman jumped early in this round of free agency, and because of the strategy, he isn't sweating out the uncertainties that more than 100 free agents are currently dealing with.

It's a good look for the 32-year-old, but one that was born from something much simpler than a grand understanding regarding the free agent landscape.

"Obviously, I didn't know it was going to end up like this," Moreland said of the current free agent chaos. "Going into it, early in the offseason, we were hearing from a lot more teams than going into this last year. We were a little more confident at the beginning just because there were a few more teams touching base with us. It seemed like everyone was playing the waiting game, and still are, I guess. We're going to feel it out and see what happens. I got a call from my agent and said the Red Sox were on the phone with him. Within the next day, we had knocked it out.

"I just told my agent that if we get close, I'm ready to do it. It's just nice to have the security of knowing everybody here and not having to learn a new organization. Being somewhere where my family is comfortable and somewhere that is a winning environment. All of those things factor into something like free agency. This is a great place to be, so obviously, it was my first choice."

All's well that end's well. But when Moreland walked out of the Red Sox' clubhouse after the Game 4 loss in the American League Division Series, the odds that he would be returning seemed slim. The Sox were going to be eyeing one of the free agent class' prizes, probably named J.D. Martinez or Eric Hosmer, and that wouldn't leave room for the good, but probably not great, corner infielder.

He certainly had his supporters after playing through a broken toe for the majority of the season, ("I had nine more," Moreland said when asked about the injury), putting up decent numbers (22 homers) over 149 games. But the Red Sox needed even more punch from that position, seemingly forcing Moreland out of the equation.

Most thought he was gone, including the player, himself.

"I guess I kind of had the same thought. I didn't really know," Moreland said. "I knew I had a good time here. Obviously, all of our conversations with staff and front office were good heading out. I guess the way everything has been going the last few years, you never know what's going to happen. This year has been a prime example of that even more. I really didn't know what to think. Just keep an open mind and let them know I had fun playing being part of this organization and playing for the Red Sox. I would love to come back, but I also understand it's a business. That's kind of the way I approached it. Obviously, when the time rolled around and we started talking a little bit, I was happy to come back. I wanted to be here.

"I told my agent, 'Listen, man, I want to be somewhere I'm going to be happy and somewhere I'm going to win.' I loved playing here last year. So when the opportunity came about, it checked all the boxes. I've got to take care of my family. I'm not worried about the market part of it. When I saw the opportunity, with something I was happy with, and my family was happy with, I jumped at it."

On paper, it's still a potentially an imperfect landing spot.

The Red Sox remain in hot pursuit of Martinez, who would seemingly force a platoon at first base between Moreland and Hanley Ramirez. At least one of the participants doesn't see it that light.

"I've never really looked at that way because my mindset isn't going to change whether I'm in there every day or half the time or whatever. I go to the field ready to go every day," Moreland said. "That's what I do. I try and be ready to go when my number is called, whether it's in the first inning, fifth inning, whenever. That's what I shoot for. Last year I was supposed to be part-time and I got more at-bats than I have ever had. I don't think you can look at a scheduled set-up of playing time because we're still two months away from the season right now and there is a lot of stuff that can happen. I'm going to be focused on getting ready to play every day and being ready to go when that time comes here."

It's a story that isn't based on money or playing time. And because of it, there is one happy first baseman at Red Sox' camp these days.