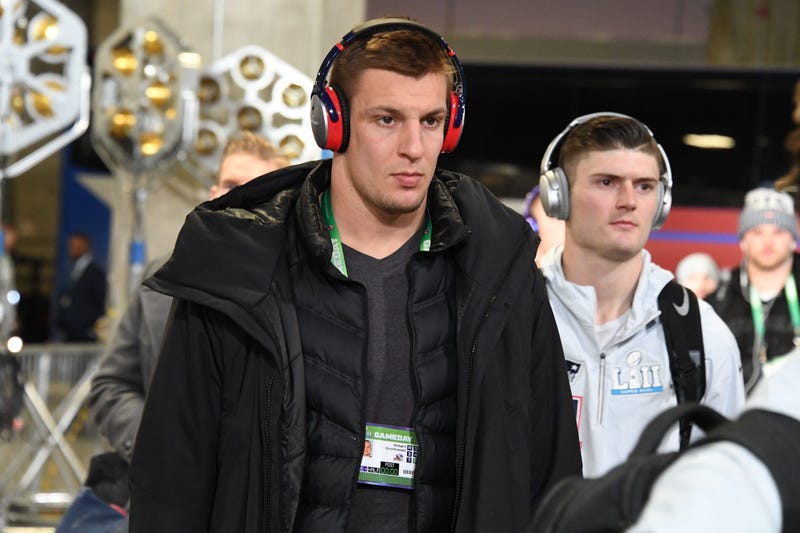 Wise words that young Peter Parker’s guardian Uncle Ben offered him upon learning of his nephew’s secret identity as Spiderman. Unlike Peter Parker, Rob Gronkowski’s powers are no secret. His all-world talents and unique skills are very clearly on display for everyone to see and that simple fact may be part of the problem.

After last Wednesday’s rather uninspiring and certainly ‘Un-Gronk-Like’ press conference, much has been made about what may be troubling Gronk. Lots of credible theories have been espoused including the realities of his incentive-laden contract and the difficulties he’ll face in achieving those goals this season. Or perhaps it’s the continuation and escalation of lingering injuries and the physical toll and financial impact these injuries have had on him. Then there’s the narrative picked up from the offseason that a fun-loving chap like Gronk is tiring of living in the Patriots tight-lipped cage, one known as "un-fun" from more loosely lipped circles across the league. The truth is, if there is a real problem with Gronkowski, all of the above are probably factors. But the tale doesn’t end there.

I see reason for his frustration right on the football field.

In recent weeks we’ve seen the Patriots offense continue to evolve, particularly since the week five arrival of Julian Edelman. Offensive guru Josh McDaniels has game-planned and schemed with great creativity; his game-calling has been unpredictable, difficult to defend and wildly successful. Over their six-game winning streak, the Patriots have scored over 200 points (not including McCourty’s pick-six or Patterson’s kickoff return for a touchdown).

We’ve seen new and innovative schemes put in place for James White, ensuring he gets those quick feet of his in space. We’ve seen Cordarelle Patterson used in multiple fashions from jet sweeps, to reverses and screens to an increasing load of carries out of the backfield making sure that they are getting this uniquely skilled talent into the game with the ball in his hands while doing so in various ways. As immensely talented as Julian Edelman is and as deft as he is at getting open, how the Patriots scheme allows for him to get in wide open space so quickly makes a big impact on his production.

My question is, when’s the last time you saw the Patriots scheme up something specifically for Gronk?

When Gronk gets the ball it’s often either up the seam in traffic or up for grabs in coverage and it’s worked magically for eight years. I’ve said this well over 100 times during my weekly show with Pete Davidson, "The Fantasy Football Hour": If there was a pickup football game at the park with all of the NFL greats throughout history available to draft, my top draft choice may very well be Gronk. I just can’t see anyone playing football better than him. Point is, his unique combination of size, power, skill, hands, blocking ability, athleticism and football instincts are as good as anyone who has ever played. He’s a no doubt Hall of Famer.

He’s so good that sometimes it looks like he’s left to do a lot by himself. To my eyes, Gronk doesn’t get much help in terms of pick-plays or motion to get him free. He’s such a physical freak and he’s been so reliable at getting open on his own for so long, that I think it’s become easy to put him in that box, seemingly exclusively this year.

Again, "with great power comes great responsibility." The problem is, with injuries and constant double teams mounting maybe there’s been a little loss of power in Gronk and time for a little shift in responsibility.

When former Patriots Tight End Ben Coates slowed down it was not a progressively deteriorating process, it was shockingly sudden. The years of physicality added up rather abruptly with Coates and the man who was once a prolific Pro Bowl talent looked like a washed up Willie Mays on the Mets upon his arrival in Baltimore with the Ravens. Conversely, in San Diego, Antonio Gates is playing in his 16th season. He’s nowhere near the player he once was but he has maintained a role for a great many years by adjusting and by the organization helping to force adjustments through new personnel acquisitions and schemes. It was just two seasons ago that Gates hauled in 53 receptions and scored seven touchdowns. Personally, like with the Gates example, I’d prefer to keep a talent like Gronk on my roster for as long as possible.

In short, if Gronk’s getting mauled on every play and having trouble getting as open as he once did, then maybe McDaniels needs to start scheming more creatively for him too. Even Godzilla gets knocked down every once in a while. If Gronk’s frustrated, this could be part of the reason. I know this: If I had a talent like that on my team and he was taking the prolonged beatings that Gronk has in his Hall of Fame career, I’d be thinking of ways to keep him healthy, engaged and active. Additionally, I’d certainly make it easier to get him the ball and help me win. Just saying.