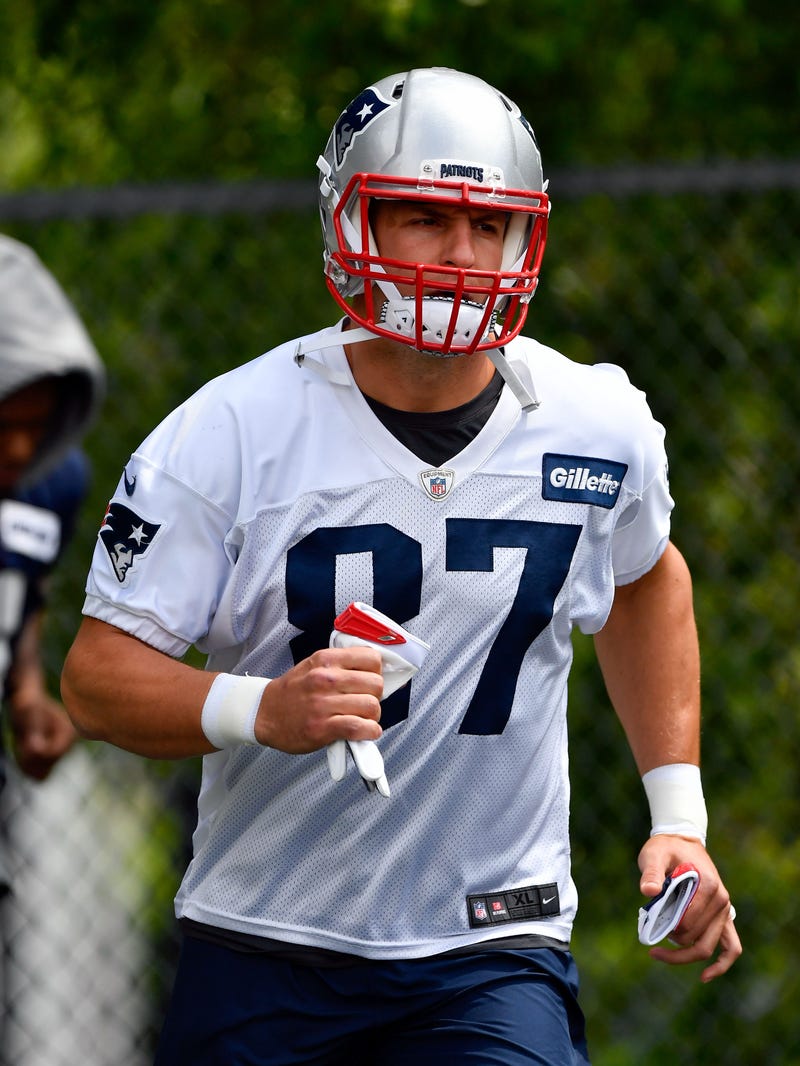 FOXBORO — One of the highlights from Tuesday’s first Patriots mandatory minicamp session was Rob Gronkowski’s catch of a perfectly thrown deep-ball by Brian Hoyer on a deep route in between safeties Jordan Richards and Damarius Travis in 7-on-7 work.

Gronkowski made the catch known by hollering in excitement and high-stepping back to the huddle.

While it seems like any other play throughout the course of a practice, it may have been a play that proved to Gronkowski that he made the right move to come back for another year.

“I feel like I definitely made the right decision coming back out,” he added.

Contrary to the offseason narrative, it wasn’t just a contract ploy, the 29-year-old really almost stepped away from the game following the 2017 season.

“I’ll just keep it simple. I just wanted to see where I was at,” he said when asked if he considered retirement. “I was having all different thoughts. Do I need to see where my body was at and everything? To see if I really wanted to go through it again. To see if I could go through it again. I feel like I'm just going to do what's best for myself and take care of myself because if I can't take care of myself, I can't take care of anyone else and I can't help out the team.”

After the Super Bowl LII loss to the Eagles, Gronkowski wouldn’t commit to playing this coming season. It wasn’t until April when the decision was officially confirmed by the tight end himself that he would return for his ninth season in the league.

Football is a grind for the average player, but even more so for a player like Gronkowski. Not only does he have an extensive injury history that he has to manage, it takes a little extra to play for Bill Belichick.

Based on reports, Gronkowski wasn’t happy for the majority of last season. In order for him to return this season, things needed to change and it began this offseason. Gronkowski didn’t participate in the voluntary workout program, including OTAs, for the first time in his career. Instead, he worked out on his own and focused on the TB12 Method.

Based on his words Tuesday, if he didn’t change his offseason approach, it would be hard to imagine him being able to play another season. It seems this was something that came up when he and Belichick met in April, before it was confirmed he would play this coming season.

It was noteworthy how much emphasis he put on the relationship between feeling good to having fun, especially in response to a question about Belichick. If Gronkowski had participated like usual in the entire offseason program and not followed the TB12 Method, could he have lasted through an entire season again? Probably not.

Last summer’s first training camp session was similar to Tuesday’s session. Gronkowski was having fun after making catches, but was then reportedly chastised by Belichick. That was when thoughts of retirement first started occurring.

This is why change was necessary. Not attending any of the voluntary workouts, taking some time to enjoy the offseason longer than usual and doing TB12 resistance band work were all new for Gronkowski this year.

Like Tom Brady, Gronkowski is different than most. And also like with Brady, Belichick needed to make some concessions. While he obviously wants every player to attend all of the offseason programs, he seems to understand that some players — Brady and Gronkowski — are different and the rules can be bent to some extent.

In order to keep them around, they need to be happy.

Gronkowski high-stepping around the field after big catches is a sign of him having fun and enjoying the game. But as we found out Tuesday, if he’s not feeling good and doing things his way, there is no high-stepping and having fun, and if there's no fun there's no football.