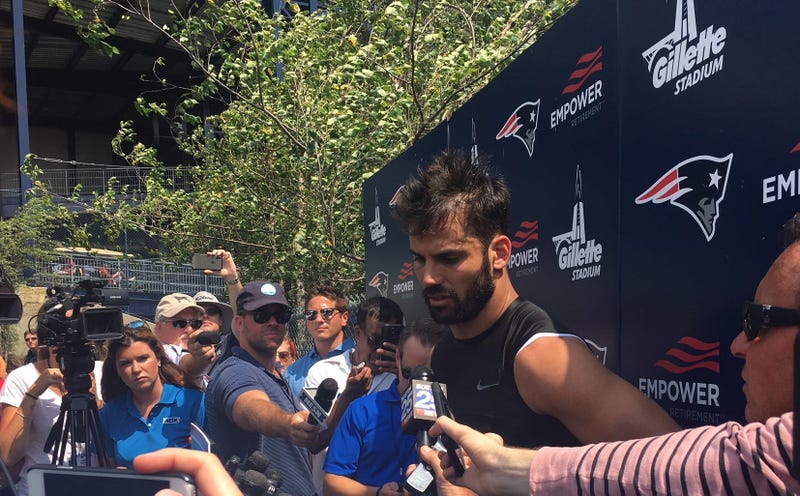 FOXBORO -- Eric Decker has only been a member of the Patriots for a few days, but given the Patriots’ receiver situation, much has been made of the 31-year-old’s potential role.

With him being 31 years old not being signed until now, is he really capable of contributing to a NFL offense? Coming into the picture so late, will he be able to learn the offense fast enough? And only getting a reported $75,000 in guaranteed money, is he even a lock to make the team?

These are all the questions being asked, but at the end of the day, there shouldn’t be any doubt whether or not he will be able to help this offense.

Decker has some limited exposure to some of the verbiage in the Patriots offense as in 2010 he was drafted by Josh McDaniels in Denver when McDaniels was coach of the Broncos. Bill Belichick noted it should help him get acclimated to the system and also said Decker is a smart player.

“Well, he’s a smart guy,” Belichick said. “I know he has recall from some of the things that we do that Josh did at Denver that are carryover. There’s a lot of differences, but there’s certainly a lot of carryover.”

There is no question the familiarity with McDaniels will help out a lot.

“There’s obviously things that change over time but there’s some carry-over that I was able to take and quickly learn,” Decker said Tuesday. “And then there’s a lot of new stuff too that, you know, I got to kind of catch up on and get ready to go.”

Also, contrary to the numbers he’s put up the past couple of seasons, even at 31 years old Decker is still more than capable of having a great season with the Patriots.

Last year in his only year with the Titans, he had just 54 receptions for 563 yards and one touchdown, but that offense was a disaster. Marcus Mariota wasn’t even close to what many predicted and he had a hard time getting Decker the ball. Decker’s poor numbers last year were more a reflection of who was around him opposed to his skill.

Just look at what Decker did in his last full season, 2015 with the Jets (he only played in three games in 2016). Even with Ryan Fitzpatrick, Bryce Petty and Geno Smith as his quarterbacks, he finished with 1,027 yards and 12 touchdowns.

While that was three years ago and he was 28, it wasn’t that long ago. Not that much time has passed.

In eight NFL seasons between the Broncos, Jets and Titans, he’s had three 1,000-yard receiving seasons, so clearly the talent is there. Also, standing 6-foot-3, he is one of the tallest slot receivers in the league. The Patriots love slot receivers and they’ve yet to have one as big as Decker. McDaniels and Tom Brady likely have already been hard at work figuring out ways to best utilize him in the offense because they are going to need him.

Don’t forget Edelman is out of the mix the first four weeks due to his four-game suspension, so it’s pretty apparent the Patriots desperately need something out of Decker. Even though he only got $75,000 in guaranteed money, based on what the team has as alternatives, he’s going to make the team. Given the current state of the receiver position and date on the calendar, the Patriots are not signing Decker unless they believe he's going to make the team.

And with the body type and talent Decker possesses, the Patriots are going to find a way to get the ball in his hands, especially the first four weeks without Edelman. His past experience working with McDaniels and natural football smarts will take over and help him make up for lost time.

But for Decker personally, he’s not thinking that far ahead.

“It’s early,” he said. “Again, trying to come in, trying to get to know my teammates, be a good teammate. Obviously work hard, know my role, my position – earn one and let it develop from there. I just hope to get an opportunity to play and help this team win.”

After less than a week he’s already talking like a Patriot and in a little over a month he should be producing like one, too.