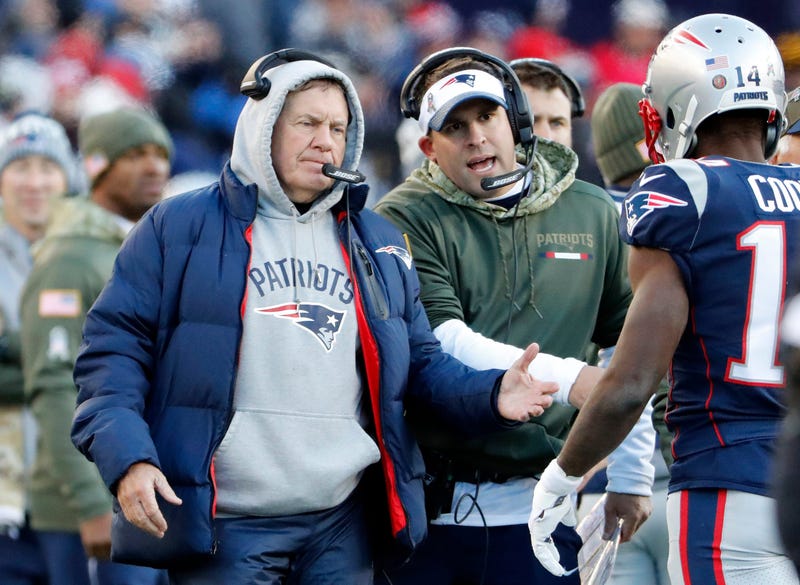 Bill Belichick is always thinking about the next move.

Having followed him for 19 seasons, New England fans have caught on. So immediately when word came downthat Brandin Cooks was being dealt to the Rams on Tuesday, the thought was, what’s next?

By getting the No. 23 overall pick in the return package, the Patriots now own four picks in the first two rounds (two in each) for the first time in the Belichick era — Nos. 23, 31, 43 and 63 overall, which create endless possibilities for Belichick and Co.

Odell Beckham Jr. has been rumored to be on the trade block and the Giants reportedly are looking for at least two first-rounders in exchange for the wide out. Now having two first-round picks, maybe the Patriots are thinking about getting Tom Brady a new toy.

With Jimmy Garoppolo being dealt last season, the organization is searching for a long-term solution at quarterback and with all those selections in the top 63, maybe the Patriots are stock piling assets to move up in the first round to select one of the top five quarterbacks in the draft — Baker Mayfield, anyone?

Well, don’t get your hopes up.

In fact, his situation is exactly why Cooks was traded in the first place. Both players have the same exact contract being in the final year of their rookie deals and will get massive contracts next offseason. Belichick knew he wasn’t going to be able to re-sign Cooks, so he got a first-round pick for him now while he could. Giving up multiple first-round picks for one year of Beckham isn’t something the Patriots are in the business of doing.

Selecting a quarterback in the first round also isn’t something the Patriots are in the business of doing.

Certainly, almost all of that has to do with having Brady under center since 2001, but it’s not something Belichick seems to prefer. Also, just look at how the quarterbacks are being valued at the top of the draft. To move up just three spots in a trade with the Colts (going from No. 6 to No. 3), the Jets gave up the 37th, and 49th picks in this year’s draft, plus a 2019 second-rounder.

If that's what it takes to move up three spots, imagine what it would take the Patriots to move up say 10-15 spots to get a quarterback? Not exactly classic Belichick manipulating the draft board, so don’t expect that to happen, either.

Having four picks in the top 63 is arguably the best draft capital Belichick has ever had, and he’s going to make the most of it. Getting the No. 23 overall pick to add to the Patriots’ stack of high draft picks is the biggest thing coming from the Cooks trade.

This gives the 65-year-old an endless number of possibilities and also the chance to address several areas of need via the draft.

It would seem an edge rusher and offensive tackle are at the top of the list of needs. If the team feels really strongly about a particular player at one of those positions, it has the ability to move up a few spots to make sure it gets the player it wants without sacrificing all that much.

Having four picks so high also gives the Patriots the opportunity to perhaps take a risk with a talented player.

Let’s just say they have a high grade on Lamar Jackson and he’s available at No. 31. Having already selected a talented player at No. 23, it could make it easier for the Patriots to take a risk with that pick, and it doesn’t need to be with Jackson, either. It’s not like the past few years when Belichick has had so few picks, as he can now take a chance if he wants.

Another possibility is if the Patriots feel strongly about the middle rounds, they could swing one of the four picks to move back in the draft and pick up a couple more mid-rounders. It all depends on how Belichick views the board.

As it relates to potentially selecting a quarterback, the Patriots don’t need to use one of the first four picks on one. If it has a late first or second-round grade on one who they like, they absolutely can be taken there, but reaching for one isn’t the way Belichick does things. There are a number solid quarterbacks who will be around in the third and fourth rounds, and who said the Patriots even need to draft one at all?

Sure, it would be nice to get a quarterback in the system and learn from Brady, but the Patriots don’t absolutely need to draft one and who said the position needs to be addressed via the draft. While it seems likely a QB is taken, it isn’t like it’s an absolute that needs to happen.

Having just two picks in the first 63 over the last three drafts, Belichick has four this year, and you can imagine how giddy he is about that. After all, this is the guy that has made 61 draft-day trades over 18 drafts.

While it’s fun to imagine someone like Beckham Jr., Sam Darnold or Josh Rosen in a Patriots uniform, the reality of the Cooks trade is it is more about the draft as whole.

Now, it’s really time for Belichick to go to work.