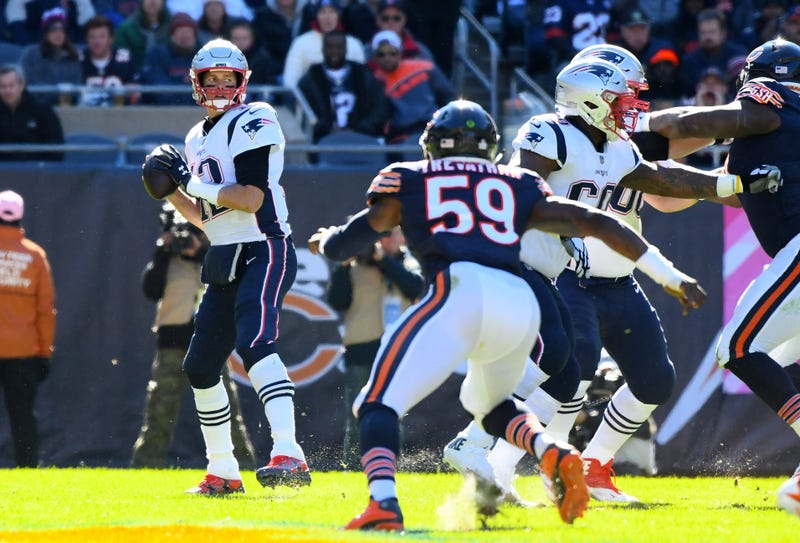 The last play of the game summed it all up.

Mitchell Trubisky’s 50-plus yard Hail Mary throw was caught by Kevin White around the 2-yard line, but several Patriots defenders were able to keep him out of the end zone to secure a 38-31 win over the Bears.

A very bad play, but it didn’t have any impact on the outcome of the game. This was basically how the entire game went. It wasn’t the greatest of performances, with plenty of bad plays on all three units, but ultimately the Patriots were able to come away with a win.

Yes, it was nice for the team to get its first road win of the season, but it still doesn’t overtake all the bad things that occurred in the game.

“There's a lot of things we could have done better today,” Bill Belichick told reporters. “So we'll go work on those and try to improve them."

Let’s start with the defense.

The unit was able to force two interceptions, which were huge plays in the game, but they might cause some to overlook how poor the unit played as a whole. The Patriots defense allowed 453 total yards of offense, including 333 passing yards to Trubisky, the second-most he’s had all season.

Its biggest issue was allowing Trubisky to make so many plays with his legs. The quarterback ran for 81 yards, including a 39-yard touchdown in the first half where he seemed to run close to 80 yards as he ran basically from one side of the field to the other.

He was able to avoid Patriots defenders with ease all game long due to poor tackling by the defense. In all, the 81 yards allowed to a quarterback were the second-most in the Belichick era (the most are 93 to Tim Tebow on 12/18/11.) It was somewhat interesting the defense didn’t change things up during the game and devote a spy to the Bears QB after he made several plays with his feet early in the game.

Sure, there were two special teams touchdowns — a Cordarrelle Patterson kickoff return and a Dont’a Hightower blocked punt scooped up by Kyle Van Noy — but there were also some issues as well.

Before Patterson’s touchdown, he fumbled a kick return, which led to a Chicago touchdown and the Patriots even had a delay of game penalty on a kickoff, which is pretty unheard of. Also, punter Ryan Allen didn’t execute his final punt of the game, as instead of pinning the Bears deep in their end, it went into the end zone for a touchback resulting in just a 13-yard change in field position.

In all, the Patriots finished with seven penalties for 64 yards, which comes a week after not committing a single penalty in the win over the Chiefs.

Offensively, the team technically scored just 24 points thanks to the two special teams touchdowns, but that isn’t bad going against the fourth-ranked defense in the league in terms of points allowed. With that being said, Brady wasn’t satisfied, mostly because of the turnovers.

The Patriots turned the ball over three times in the game, bringing their total to 13 on the year. This comes after having 12 all of last year.

"I still think we can do a lot better than we did today," Brady said. "We're going to have to keep getting better every week. I don't think it's next week or the week after that, but we need to make improvements.

"You just don't know when your number's going to get called. And everyone seems to be making plays. We've just got to do it more consistently. We're able to move the ball and score points and I think the turnovers are frustrating because we talk about them all the time. We just haven't corrected them yet.”

Even though there were a number of miscues, it does need to be recognized the offense was without Rob Gronkowski for the entire game, as he missed the contest due to a back injury that flared up late in the week and then Sony Michel was injured in the first half. The offense didn’t look like a unit missing two of its biggest playmakers, which is a credit to them.

And then winning on the road is no easy task in the NFL. While it’s received more attention that it has needed to over the course of the week given the team has been the best road team in the entire league over the last five or 10 years, it does deserves some credit.

While there are plenty of things to clean-up and will make for some tough film sessions, at least it is coming after a win.

“Could we have done some things better? Obviously,” safety Duron Harmon told reporters. “But when you win, you’d rather coach from and learn from a win than a loss.”