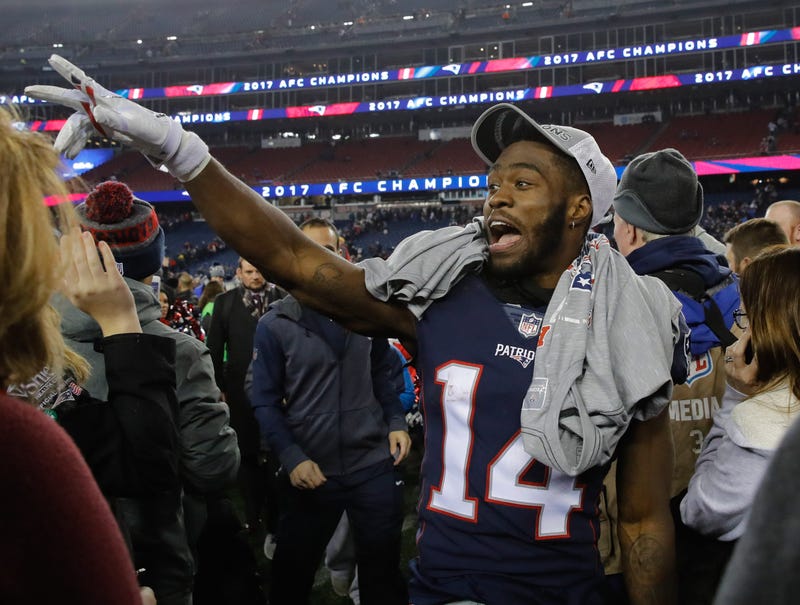 Even though it’s the NFL offseason and Brandin Cooks isn’t a free agent, his name could come up a bunch in the coming weeks as the new league year approaches.

The 24-year-old wide receiver will be playing under his fifth-year option from his rookie contract, meaning he will be on the books for $8.5 million after just $1.57 million last year. It becomes fully guaranteed on March 14.

As of now, Cooks has the 13th-highest base salary in the NFL among wide receivers, which seems about right, as he finished 11th in receiving yards, but compared to the other Patriots receivers, this isn’t fair value.

Julian Edelman and Chris Hogan combined won’t be making as much as Cooks will in 2018 and if and when Danny Amendola signs, the trio’s combined salaries won’t be much more than the $8.5 million going to Cooks. With the way the Patriots typically operate, this may be something they look to address.

They could do this in two ways.

One, release him before the new league year as there’s no dead money, but this likely isn’t an option. The Patriots traded a first-round pick for him last year and he’s coming off a solid first year in New England. While it had its ups and downs, Cooks finished the year with over 1,000 yards receiving and immediately became a favorite of Tom Brady. Flat out cutting Cooks after one season and after trading away a first-round pick to acquire him just doesn't make any sense on multiple levels.

The second option is to sign him to an extension and lower his cap hit for this coming season. This might get complicated, though.

With Cooks scheduled to become a free agent after this upcoming season, he likely views it as a chance to cash in on a long-term, big money deal. The Patriots on the other hand probably don’t want to do this, as this isn’t how they operate, especially with receivers.

New England would probably love for him to sign an extension of two or three years and lower his 2018 cap hit in the process, but would Cooks really want to do that when he knows he could probably get a long-term deal on the open market next offseason?

The one thing the Patriots could have going for them is how much Cooks enjoys working with Brady and vise-versa. At just 24 years old, Cooks could want to be with Brady for the final few years of his career and then still be young enough where he could still get a massive contract once Brady retires.

“Brandin Cooks has been an incredible player for us since he got here," Brady said during Super Bowl week. "His attitude, his approach to the game for a young player, his maturity is really what struck me. He is one of the last guys off the field every single day, and what he’s done for our team in one year is really incredible. I haven’t seen it very much from anybody coming in and make the contributions he’s made. He’s done it in his own style, too. He’s not trying to mimic anybody, it’s just him.

"I love playing with the guy. I love his spirit. I love his attitude. I love his will and determination. I love his leadership. I am very lucky to play with him. Hopefully we have many more years together.”

It would not be a surprise at all to see the Patriots approach Cooks about a contract extension over the next few weeks, the question is how receptive would he be?

Worst-case scenario is Cooks and the Patriots don’t do anything over the next few weeks and he plays out the year making $8.5 million. He would then become a free agent after next season and explore the open market where a lot of money would get thrown his way.

Even if he didn’t return, helping the Patriots reach the Super Bowl in his first year and then whatever happens next year would probably prove worth the first-round pick they gave up last March.

Some have criticized Cooks for his first season in New England, as he really can only do one thing well, which is stretch the defense and catch the deep-ball. He isn’t one to run over the middle, or one to make defenders miss with the ball in his hands, but the thing is this has never been part of his game. With the Saints, all he did was catch the deep-ball.

When Edelman was lost for the season it was expected Cooks would fill his void, and looking back, that was unfair to him.

Catching 65 passes for 1,082 yards and seven touchdowns was the best first season for a Patriot receiver working with Brady since Randy Moss. Assuming Edelman is healthy next season, Cooks could have an even better year with defenses paying more attention to the middle of the field, which could allow for Cooks to get single coverage on the outside.

The Patriots brought Cooks on board with the assumption Edelman would be on the field with him, so next season will give a better depiction of Cooks’ impact with the offense.

While a short-term extension is probably what the team would prefer, looking at the other Patriots receivers, Edelman is 31 years old, Amendola is 32, Hogan is 30 and Malcolm Mitchell has some health concerns, so maybe the Patriots should actually look to extend Cooks for more than two or three seasons. This would ensure themselves they have a dependable wide out for the foreseeable future.

Signing him to an extension now would certainly be cheaper than next offseason when he’s a 25-year-old free agent.

While it may seem weird for Cooks’ name to be in some rumors over the next couple of weeks, there’s good reason for it, especially if it ends with a new, long-term contract.