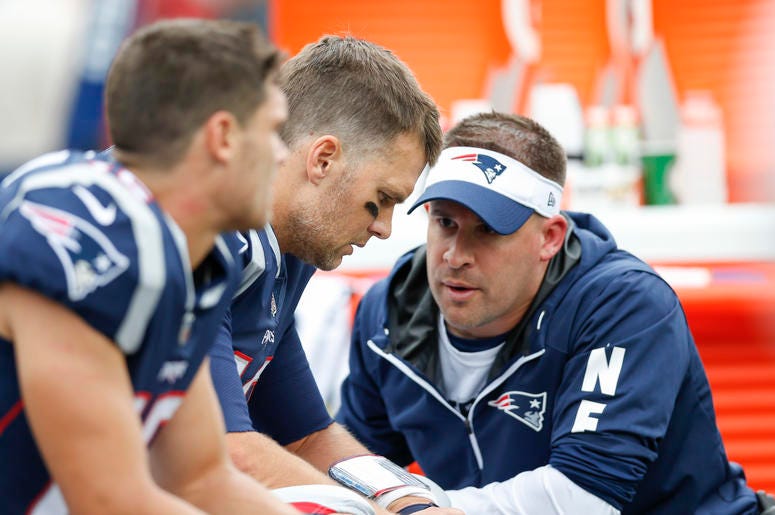 Another year, another year of the Patriots offense being a top 10 offense in the NFL.

Following Week 9, the Patriots are ranked ninth overall, but fourth in points scored. Many assume it’s been business as usual, but the reality is it’s been far from it and there’s been one person who has been instrumental to keeping things on track — offensive coordinator Josh McDaniels.

Look at what he’s had to deal with over the course of the first half of the season.

At receiver, Julian Edelman missed the first four weeks, so the offense went into Week 1 with Chris Hogan, Phillip Dorsett, Cordarrelle Patterson and Riley McCarron. After Week 2, it was clear more was needed so New England traded for troubled wide receiver Josh Gordon. He didn’t see his first action until Week 4, and it wasn’t until Week 5 where the position was at full strength because finally Edelman and Gordon were active together to go along with Hogan, Dorsett and Patterson.

This came following a rotating cast of characters at receiver during training camp, so the position was never really settled until Week 5 of the regular season.

The running back position has had its fair share of issues as well. Rookie Sony Michel needed to miss Week 1 due to a knee injury and he's also missed the last two games with another knee injury. Jeremy Hill was lost for the year in Week 1 and Rex Burkhead was placed on injured reserve after Week 3 with no replacements ever brought in. It’s gotten so dicey at the position that Patterson, a natural receiver, has been the leading rusher in each of the last two games.

Then at tight end, there’s been two games where Dwayne Allen was the only active player at the position due to injuries to Rob Gronkowski and Jacob Hollister. Gronkowski has missed two games and hasn’t really looked like himself since Week 1, while Hollister has only played in three games all year.

Despite all the instability, McDaniels has still found a way to keep things running like usual, as the Patriots are averaging an even 30 points a game.

“He’s the best in the league at what he does," Tom Brady said this week on Kirk & Callahan. "Everyone is going to want that. I know the Patriots want him coaching for us. He’s under contract with our team for a long time and that is a great thing for the Patriots.”

Being so dominant on offense is hard enough, but when the unit has been so inconsistent with personnel it’s close to impossible. Without McDaniels’ guidance, who knows where the unit would be.

“Relative to the game-planning process, the number one thing you want to try to do is give your group an opportunity to be successful and achieve the goal of going down and scoring points on offense on each possession,” McDaniels said on a conference call Tuesday. “That’s the number one goal. If you can make it fun and you can make it creative at the same time, then that’s a tremendous benefit for everybody. I think everybody enjoys that, I think coaches enjoy that, I think players enjoy that.

“Sometimes, some weeks are easier to do that than others. I think a lot of it depends on who you’re playing and what they do, the type of scheme they run, the challenges that they present. But, I always think if you can make learning and preparing fun and exciting, that kind of keep it fresh.”

Not only has the offense had to deal with inconsistent personnel, it’s also had to deal with multiple weeks where key players were legitimate game-time decisions, complicating matters when it comes to game-planning during the week. For instance, last week against Green Bay the team need to have a plan with Gronkowski active, and a plan with Gronkowski inactive. Most of the time a backup player can just fill the void when a player cannot play, but given how talented Gronkowski is a lot of plays are specific just for him.

McDaniels credited the players for being able to adapt, but they wouldn’t be able to without McDaniels putting them in the right positions.

“This is a very common occurrence for us,” he said. “We have many weeks, probably more than not, where we’re not one hundred percent sure exactly how it’s going to finish when we begin at the beginning of the week of our preparation. You have to have an open mind. I think it’s one of the great challenges that we as coaches enjoy is to put together a plan that – understanding the circumstances, that has enough variance in it and enough flexibility that you can adjust if you need to.

“I always say the same thing, I consider it the same as – if you go to a game and somebody gets hurt on the first series, you can’t say, ‘Oh, shoot, we don’t have any plays left.’ The players that provide depth at those individual positions, they’re responsible for that material. They do a tremendous job of preparing hard to go in there and back up those positions and they’re ready to go every single week. They deserve a ton of credit for that because they work hard to put themselves in position, whether they’re starters or backups or they’re going to play 25 percent or 85 percent – they work the same. They know and understand how this league works.”

While McDaniels is never one to accept praise and always deflect it to his players, he is the one that actually deserves the majority of the credit.

What he’s done this year has been no easy task, but he’s been so good it’s been hard to even notice what he’s had to do.