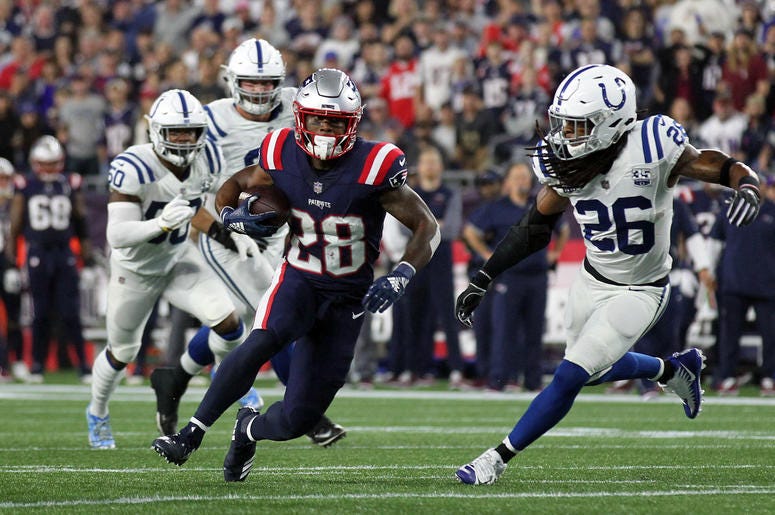 Losing three of the last five games and averaging 20.8 points in those games, seven points below the season average, it’s clear the Patriots offense needs a jumpstart with the playoffs on the horizon.

Normally, this would be looking to a star receiver or feature back, but in the case of the 2018 Patriots, it’s actually third-down back James White.

His production as it relates to the overall success of the offense is pretty glaring.

Feeding the ball to a third-down back is not the way to win games and get an offense going, but in the case of White, his value to the offense is pretty clear.

“He’s obviously a very good player for us, has been tremendous in his role, is very valuable,” he said. “So, the more he touches it, the more we can get it to him, we usually feel very good about those opportunities. Again, sometimes there are other things that determine whether we can or can’t get it to him and there’s usually – other than screen passes or run plays – there’s usually other things available on the play. And based on what we’re seeing and the coverage and so on and so forth, we try to do the best thing we can on each pass play if it is a scheme where there’s a lot of guys out on the route.

“He needs to be involved, he certainly has been a tremendous player for us and the more he can touch the ball, the better off we all feel.”

There’s also a correlation to his touches compared to games Rex Burkhead plays in and doesn’t play in.

Clearly, White’s touches are going to Burkhead. But, does it make the offense better?

Sony Michel is fine as the every-down back, but it’s time for White to get more playing time and have Burkhead take on a lesser role.

Burkhead doesn’t need to be inactive or anything that severe, but he should just be limited to specific packages. Perhaps, the pony set (two running backs) that Patriots have shown on a number of third-down plays. Since Burkhead’s return, it seems the Patriots have gone out of their way to try and get him involved, but it is now counter productive by taking away White’s playing time and touches.

“Everybody wants to be out there as much as possible, and with our offense it is a gameplan offense, so we know you’re not going to be out there each and every play every week," White said Monday on Dale & Keefe. "So everybody has to accept their role and when you’re out there you have to make the most of your opportunities.

"That is all I can really say about that.”

With just two weeks to go in the regular season, the Patriots need to go with what works best and that is more White, less Burkhead.