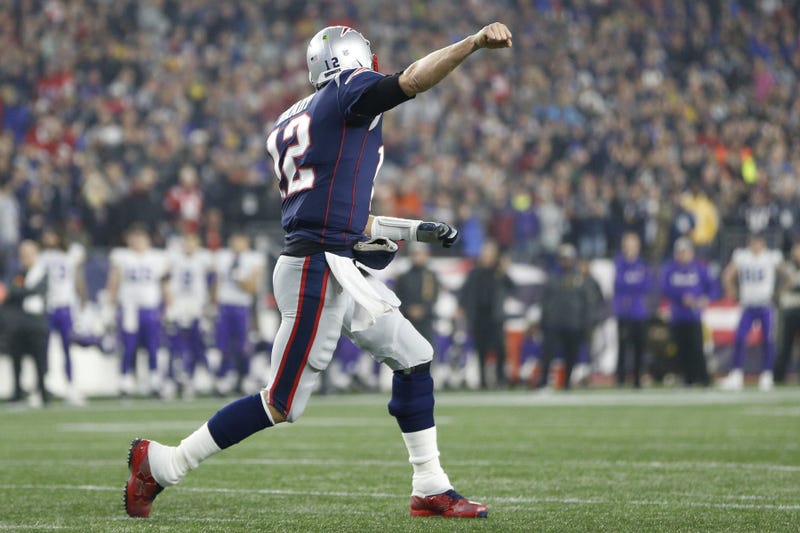 FOXBORO — Going into Sunday’s game against the Vikings, there were a lot of questions when it came to the 2018 Patriots.

Over the first 11 games they were a very inconsistent team having picked up wins over the Chiefs at home and Bears on the road, but also suffered road losses to the Lions, Jaguars and Titans.

Following the brutal loss to the Titans, they were able to beat the Jets on the road last week, but the Jets are not a good team. The Patriots needed something more — a win over a good team to prove they have what it takes to make a deep run in January.

That is what Sunday’s 24-10 win at home over the Vikings was — a statement win.

“That was a great team win by our guys today,” Bill Belichick said. “I thought we really played hard. Minnesota is obviously a good football team and they do a lot of things well. They're tough. We had a good complementary game. … Overall, I thought it was a good week of preparation and we came out there and played a good complementary game with all three units contributing. We had a lot of guys step up and play well. Hopefully, we can build on that going forward. It's a good win against a good football team. Minnesota's a good team.”

A roughly seven-minute span from the end of the third quarter to early on in the fourth showed a lot about the team and who they are.

With six minutes left in the third quarter, Stephen Gostkowski missed a 48-yard field goal and then the Vikings used the good field position to set up a game-tying field goal that tied the game at 10. The Patriots had allowed 10 unanswered points, but instead of letting the Vikings continue with the momentum, they took it right back.

On the drive following the field goal, which began with just over two minutes left in the third, Tom Brady wasted no time and led the offense 75 yards in four plays, capped off by a 24-yard touchdown throw to Josh Gordon to get the lead back. The defense then did its part by forcing a three-and-out, giving the ball right back to Brady and the offense. Seeing blood in the water, Brady continued to apply pressure and led the offense from midfield to the end zone in six plays with the touchdown going to James Develin, his second of the game, on a two-yard run with 10:57 remaining in the game.

Those roughly seven minutes were not only the difference in the game, but what proved this Patriots team actually has something — the fight needed to compete when things matter most.

“It was just a great win,” Brady said. “They’re a good team, good defensively, obviously got a lot of skill guys on offense, so it was just a hard-fought game. Good, complementary football, defense played great and just a good win.”

Defensively, the Patriots did a tremendous job in shutting down the Vikings’ best player Adam Thielen. Coming into the game with nine, 100-yard receiving games on the year, the Patriots limited him to just five catches for 28 yards and a touchdown with Devin and Jason McCourty doubling him much of the game.

When the game was on the line down the stretch, the defense was at its best. Minnesota’s final four drives went: punt, turnover on downs, interception, interception.

“That is a good team over there,” safety Duron Harmon said. “We knew it was going to take a great defensive effort just to put this whole team in a good position to succeed. We knew we had to come ready to play and I think guys really accepted the challenge to come out here and play hard for 60 minutes. It is something we’re really going to try and build on.

“Obviously, the tape won’t be perfect. There still will be stuff we have to continue to work on. We had some runs that spit out there, but overall all 11 guys, including the guys that subbed like myself that came in, we did a good job of staying focused and playing hard for 60 minutes.”

Also, the Belichick-Thielen exchange on the sidelines told a lot about the team. They respect the hell out of their coach and have his back no matter what. A few plays after the verbal back-and-forth Thielen dropped a pass and Matthew Slater and Chris Hogan could be seen mock cheering the play from the Patriots bench. Also, Kyle Van Noy went right at him on the field as he yelled at Belichick.

“A lot of people don’t see that emotion come out of him a lot, but it lets you know he’s not only passionate about the game, but he’s passionate for his players,” Harmon said. “We appreciate it when we get to see that every once in awhile.”

As it relates to the rest of the AFC, the Patriots are still the second seed. They are in a good spot to earn a first-round bye, potentially even homefield advantage, and looking good compared to the other teams at the top of the conference.

Kansas City is obviously in a tough spot given what happened with Kareem Hunt, and the Steelers are now 7-4-1 after their tough home loss to the Chargers Sunday night. That pretty much eliminates them from contention for any of the top two seeds and a first-round bye.

It will come down to the Chiefs (a full game ahead), Chargers, Texans and Patriots for the top two seeds and the Patriots have the advantage with having the tiebreaker over the Chiefs and Texans. It is worth noting the Chargers are a very dangerous team at the moment and their meeting with the Chiefs in two weeks will go a long way in determining what the top of the conference will look like.

Regardless, the Patriots are in a great spot to earn a first-round bye, but also potentially the No. 1 overall seed.

With that being said, they aren't paying any attention to what is going on.

“It is extremely important [to take things one game at a time],” Harmon said. “Based off the fact we have seen what happens when we got out there and don’t come ready to play — not focused, not ready, not playing for 60 minutes. We have been down that road before. I think we have a great group of guys that understand what it takes to win football games. It’s one game at a time, one play at a time when we are playing and just continuing to get better.”

In a season where there have been so many questions about what exactly the Patriots are, Sunday showed they are a legitimate AFC contender that has what it takes to potentially earn a trip to Atlanta in February.