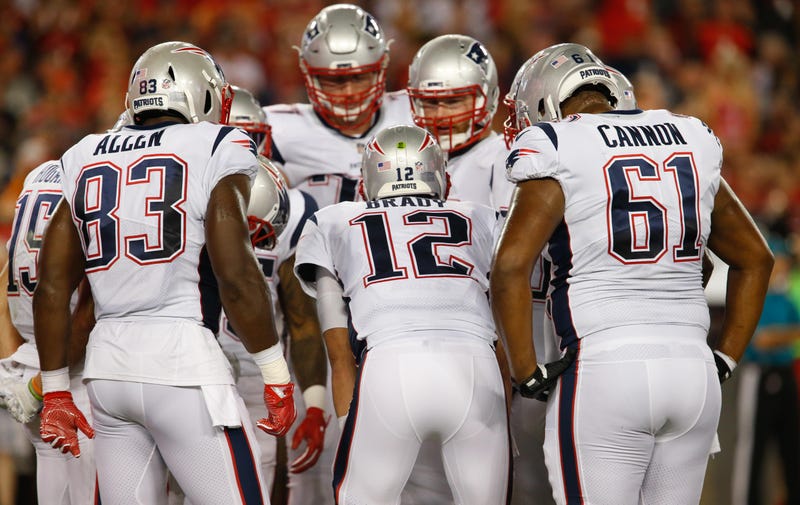 What do all three have in common? They have all criticized the Patriots culture in the last few weeks, saying they don’t have any fun.

This was the major storyline when speaking to Patriots players following Thursday’s OTA session, and everyone who spoke on the matter had the same general message: playing for Bill Belichick and the Patriots isn’t for everyone, but the winning is what makes it fun.

“It’s a tough place to play,” safety Duron Harmon said to WEEI.com. “This is a place where coaches, Coach Belichick, he expects a lot of his players. He expects everything to be done at a high level and a lot of people can’t have that. They don’t like having that pressure on them. You look at the track record of this organization and it’s not a coincidence why so much success is had here. It’s the reason why Coach Belichick has been able to win as many games and lead this team to all the games we’ve won.

“You can say we don’t have fun here and we don’t do this, but at the end of the day I have a lot of fun because we win a lot. That is what this game is about. It’s about winning. I am around a great group of guys, great group of coaches, great organization. So, when you’re working hard at a goal to win, it’s fun.”

Devin McCourty said pretty much the same thing while addressing the Eagles players and Marsh directly.

“I mean, I think now you look at a team that beat us in the Super Bowl and you get guys who are talking about it and that’s front page news," McCourty said. "Then Cassius leaves, he played here, so that’s another one. Cassius, he had a frustrating time here, so I don’t expect him to leave and say he had a great time. I think if you ask any guy on this team, the fun we have comes from hanging with each other. You guys are in the locker room, the relationships between the guys, a lot of our fun happens right in the locker room before we even come out here and win football games.

"Obviously, we work for a living, so in this business you have to win. I feel like when you lose it’s not fun. People get fired, you lose your job. That’s not fun. I wouldn’t believe anyone who told me if they only won half their games they were having the best time of their life. I am just not here for that. I think the value of how we interact and the relationships we have, no one else sees that. No one in Philly can so those guys don’t like each other. They hate each other. You don’t know that.

"I think you’ve even seen, guys leave and we still have great relationships with them. Guys still talk. To me that is the fun part and then we come out here and we win games. That’s the best fun at the end of the week. I plan on continuing to do that no matter what is said.”

What’s the other thing those three players have in common? They haven’t ever played for the Patriots, or in Marsh’s case, haven’t been with the organization long enough to know what it really is like.

One of the things both Harmon and McCourty referenced was the camaraderie and closeness of the players on the team, which is 100 percent true. There’s multiple group chats with players, mostly within position groups, that not only last for entire seasons, but well beyond as well — even when players move on to other teams.

They establish these bonds through the experiences they go through together. Everyone goes through the same intense OTA sessions, which lead into training camp and last all the way through the regular season, usually finishing with a deep run in the playoffs.

Think about how gratifying it can be for the entire team to go through everything they do beginning in May and then have it end with hoisting the Lombardi Trophy the following February? Nothing can beat that.

Even last year, going to Minneapolis for the Super Bowl was a good time for the players. Winning the AFC championship at home in comeback fashion over the Jaguars -- how could anyone on the field that day say that wasn’t fun?

In a way, Belichick makes it so the players are trying to prove him wrong all season where no matter what they do it isn’t good enough because of how hard he is on them. Going through all the tough times brings the players closer together and it’s these long-lasting relationships along with winning games that make it worth it.

Football isn’t supposed to be all fun, it’s a job. Work isn’t fun all the time, either, but big events and accomplishments are what get people coming back day after day.

"We feel what's important to us is to win," Belichick said. "So that's really what we're trying to do."

There are different ways to do things, and of course there are other ways to run an organization. Sure, the Patriots could make it so they have all kinds of fun during the week at practice and not stay at the facility very long, but what happens when in turn they get blown out on Sundays? How much fun is that?

Playing for the Patriots isn’t for everyone, but players who haven’t spent full seasons in New England cannot say anything about the culture because they simply haven’t experienced the things most Patriots players have.

While not every player in the NFL can do it, it’s pretty evident playing for the Patriots can actually be fun.