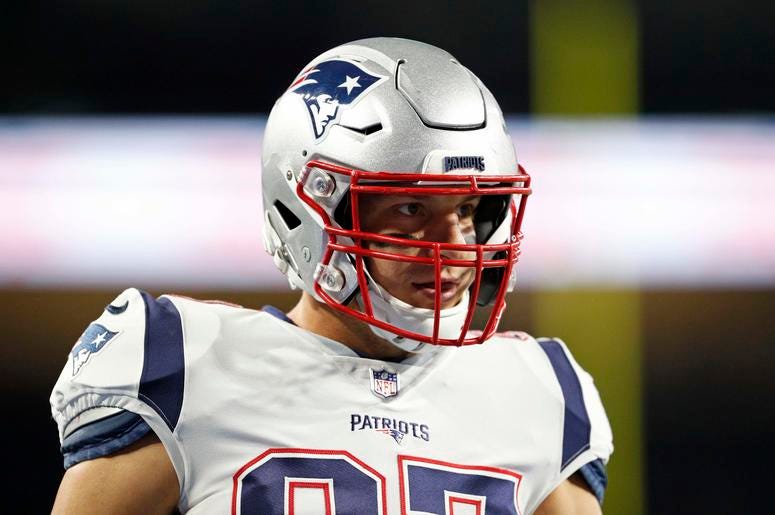 FOXBORO — Rob Gronkowski has been a member of the Patriots since 2010, so it’s not very hard to tell when something seems off.

Wednesday was one of those days.

The tight end stepped to the podium for his typical Wednesday press conference, but after three minutes of fair questions and short, unusual Gronkowski answers, he thanked reporters and went on his way back into the locker room. As he strolled through the locker room he seemed irked, walking at a much brisker pace than usual.

Most Gronkowski press conferences are jovial where he jokes back and forth with reporters, but Wednesday was not one of those days and based on what occurred it seems he’s frustrated.

But, frustrated with what? The team has won five games in a row and is 6-2 on the year.

For starters, take a look at his numbers.

After missing one game, in seven games this season, he has 29 catches for 448 yards and just one touchdown. He hasn’t recorded a touchdown since Week 1 and the six-game touchdown-less streak is the longest of his career.

He’s on pace for 58 catches, 896 yards and two touchdowns. These would be the lowest of his career for seasons he’s played at least 14 games since his rookie year, except in that year he had 10 touchdowns.

Keep in mind he signed a new contract just before the start of the season to add in some performance-based incentives. In order to earn the maximum of $3.3 million (hit three of the four), he needs to play 80 percent of the snaps and have at least 70 receptions, 1,085 yards, and/or nine touchdowns.

Clearly, he’s well behind schedule and that pace is based on playing in the remaining eight games of the year. There’s no guarantee he will do that.

One possibility for being frustrated is Gronkowski sees these and realizes just how far behind he is and will likely miss out on $3.3 million. But, going off of what he and others say, individual stats don’t matter, as it is all about winning.

“I mean, we're 6-2,” Gronkowski said Wednesday. “We just won five games in a row. We're just trying to get the W every week."

Another possibility is he’s playing hurt, and he’s getting more and more frustrated he’s not playing at the level he’s capable of.

The tight end has been on the injury report with an ankle injury since the early stages of the season and then had a back injury pop up two weeks ago on the Friday before missing the game against the Bears.

“[He is] such a great competitor with what he’s fought through over the course of his career,” Tom Brady said earlier in the year on Kirk & Callahan. “Nothing short of a miracle in a lot of ways.”

Gronkowski hasn’t been the same dominant player we’ve seen in the past to this point in the season. He hasn’t showed the same explosiveness off the ball as in past years, or the ability to get past defenders down the field. It also just seems whenever he goes down, it’s tough for him just to get up. Teams haven’t even really needed to do anything special against him in recent weeks, as one player has been able to shut him down.

This also works in reverse.

He could be frustrated that he feels fine, but still isn’t able to have the same explosiveness and burst that he’s had in the past.

One thing is certain and that is he isn’t playing like the All-Pro everyone is used to seeing.

From this viewpoint, it’s likely injuries are impacting Gronkowski and in turn negatively effecting his numbers. Being so dominant to this point in his career, it’s tough for him to answer questions week after week of not producing to the level everyone is used to, and Wednesday was the breaking point.

Gronkowski likely isn’t going to get any healthier the rest of the season, so it’s just going to have to be something he deals with and in turn maybe he needs to change some expectations to help ease some inner frustration.