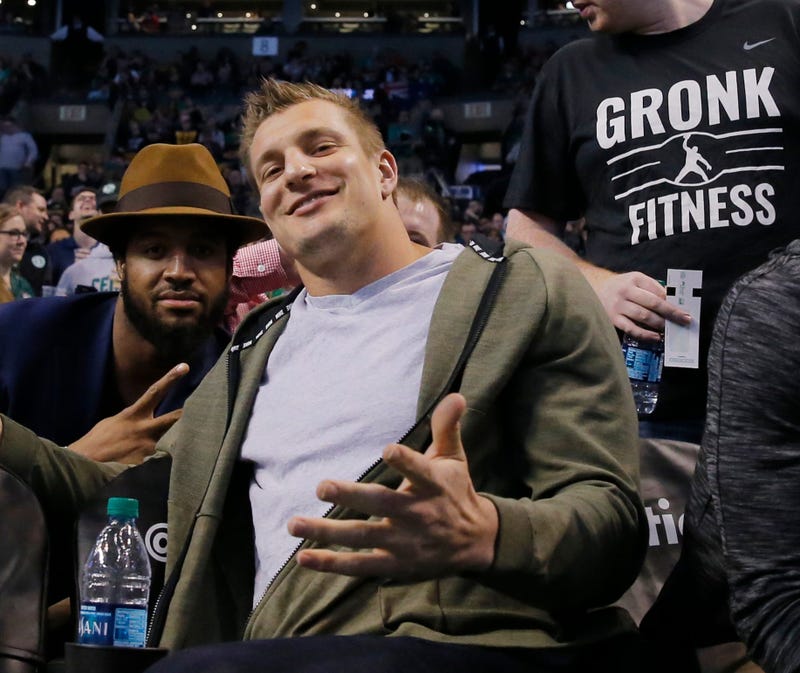 Rob Gronkowski likes to joke around and have fun, and there’s nothing wrong with that at all. In fact, athletes with personality who show it on camera at their press conferences are a breath of fresh air in today’s media landscape.

But, Saturday at Gillette Stadium when Gronkowski held a press conference to promote a Monster Energy SuperCross event, he crossed the line.

Everyone knows by now the tight end was not at the start of the Patriots’ offseason program workouts that began this past week, so Gronkowski was asked if he’s planing on attending any upcoming offseason workouts?

He said no, and then was asked why not?

“I’ve got dirt biking skills to work on,” he said to reporters.

Earlier on in the press conference he was asked what his status for the 2018 season is?

“My status is doing really great,” he said. “I’ve been riding dirt bikes. I’ve been training really hard. I can vroom vroom really good. I can ride that bike like no other, and my speed is up there.”

He added: “Wow. Coming at me. I’ve learned never talk forward. I’m just here today in the present. I’m working hard, riding these bikes. Just drinking Monster Energy Gronks, so you can get wild, do crazy stuff that people don’t like when I do it, but I’ll just do it. Get crazy.”

Gronkowski joking about missing the workouts and not committing to attending them in the future is essentially mocking Bill Belichick, the rest of the coaching staff and the rest of his teammates for participating and caring so much about the offseason program.

Not exactly a great look for a two-year team captain.

As a few others have already pointed out, what are Belichick and other Patriots staffers thinking when they see the video and read the comments? They probably are a little ticked off.

In most years, the workouts are attended by over 95 percent of the team and the large attendance gets praised multiple times over the course of the season and noted by the head coach as a major reason why the team is so successful. The heavy attendance shows how bought in the entire team is to the Patriots’ program.

This year, two of the Patriots’ captains (Tom Brady and Gronkowski) are skipping them, at least for now. This is worthy of being talked about and not dismissed “because they are voluntary.” If they are voluntary, what makes this time different than the other years for Gronkowski?

If Gronkowski’s reason for skipping the first few weeks of the program is because of his desire to work with Alex Guerrero and he plans on returning once real football work starts on the field, fine. Great. All the power to him. But, don’t hold a press conference just steps away from the Patriots’ workout room wearing a racing helmet basically laughing about the offseason program.

How does that look for the vast majority of the roster who attended the workouts last week and busted their butts like they have for all the years they have spent on the Patriots roster? How does that look for the coaching staff, especially the strength and conditioning staffers, who spend hours and hours planning for the weeks to ensure the team is prepared for training camp and then the regular season?

Whether he realized it or not, Gronkowski’s actions Saturday were pretty much mocking his coaches and teammates. They are all working as hard as they can, while he’s laughing about going “vroom, vroom” on a racing bike.

Gronkowski is no longer a 22, 23-year-old young player. He’s now 28 years old and has been a team captain for two years. He should be a player younger players look up to, and while he does a lot of things other players should take notice of, this weekend’s press conference was not one of them.

It’s completely within Gronkowski’s right to skip the voluntary workouts, just don’t make comments that could be seen as mocking his teammates that did participate.