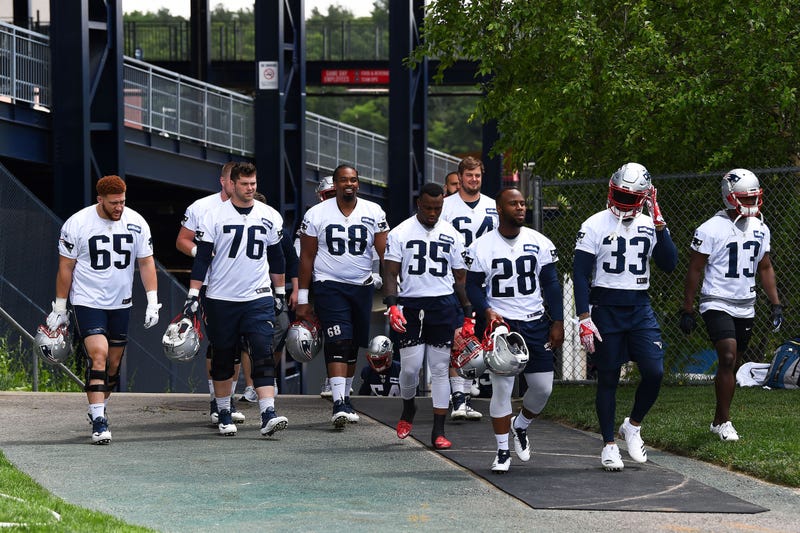 With Bill Belichick canceling Thursday and Friday’s OTA sessions, the offseason workout program is officially over and players are off until training camp, which will begin in late July.

The media was present for five of the eight workouts, so a good amount was learned about the team. It is worth noting this was primarily a teaching camp and players weren’t in pads, so it’s hard to make firm assumptions, but we’ll do our best.

Here are a numbers of thoughts on the team as the offseason program comes to an end and training camp is on the horizon.

— Of course the biggest story of the spring was Brady and Gronkowski not participating in the voluntary portion of the offseason workout program for the first time in their careers. This gave more fuel to the thought that there is tension between those players and Belichick. The coach could have made it difficult when they returned for the three-day minicamp, but he didn’t. He actually downplayed their absences and did them a solid. Perhaps he was sending an olive branch to end things once and for all.

— Although they missed the first seven weeks, Brady and Gronkowski didn’t miss a beat upon their returns. In fact, their presence drastically increased the level of play and intensity. The three days of minicamp were much more intense than any of the three OTAs the media was able to see, and Brady and Gronkowski being on the field surely had something to do with that.

— Overall, it appeared the coaching staff was pretty hard on the players. On two occasions, Belichick made the entire offense run a lap, including the coaches. It’s worth pointing out that the coach hasn’t changed his attitude despite criticism from the outside of the team not having any fun.

— Malcolm Mitchell’s status is a bit concerning. The third-year receiver was seen in team photos at the first OTA session, but wasn’t spotted at any of the other on-field workouts. After missing all of last year with a knee injury, following an injury history in college, the fact he still cannot get on the field for the spring workouts isn’t a good sign. Following the Super Bowl, Mitchell talked about how important the OTAs were for him, so it does seem like he had another setback since he wasn’t on the field with the rest of his teammates.

— Speaking of receivers, this position may be the most competitive of any during training camp. Things got even more interesting following Julian Edelman’s reported four-game suspension, as other players will need to step up. As of now, there are really only three locks to make the team: Edelman, Chris Hogan and Matthew Slater (although if Edelman’s suspension stands, he won’t count towards the first 53-man roster). That leaves Mitchell, Jordan Matthews, Cordarelle Patterson, Kenny Britt, Phillip Dorsett, Braxton Berrios, Riley McCarron and Cody Hollister competing for three or four spots, as the team usually keeps six wide outs, including Slater. Each player has a number of positive qualities, so it will be interesting to see who emerges come July and then in the preseason games.

— Backup quarterback Brian Hoyer was inconsistent in the workouts open to the media. If Brady were to ever miss games, it would be hard to win with the long-time backup under center. We came away impressed with rookie Danny Etling, who did show signs of being a rookie, but the seventh-round pick has a live arm. It’s hard to make a full judgment on the quarterback situation without pads and real action, but don’t sleep on Etling. He has potential and it’s clear he’s willing to learn as he was attached to assistant quarterbacks coach Jerry Schuplinski’s hip all spring.

— Rookie Sony Michel was quite impressive in the backfield and it seems the team has plans for him to catch a number of passes out of the backfield. Rex Burkhead also had a strong spring, while Jeremy Hill and Mike Gillislee did not. This can change once the pads go on, though.

— With Gronkowski not on the field, Jacob Hollister seemed to make the most of it as he was one of the biggest standouts on the entire roster. But, keep in mind he looked good last year as a rookie without pads, but then got a little overmatched once things got physcial. Also, Dwayne Allen struggled just to make it through the sessions, especially during the three-day minicamp. It wouldn’t be a surprise to hear he’s dealing with a lingering injury, as he was constantly bent over and even limped a good amount towards the end of the workouts.

— In the secondary, undrafted cornerback J.C. Jackson got a number of reps opposite Stephon Gilmore at cornerback, so clearly the team wants to get a good look at him. Jason McCourty didn’t participate in any team drills, which may have been the biggest mystery of the spring, as it doesn’t seem like he has an injury. Gilmore was the best defensive player on the entire field and could be primed for a huge Year 2 in New England.

— The new kickoff rules appear to be a work in progress. The team spent a good amount of time working on the play with a number of coaches involved, including Ernie Adams and Bret Bielema, who still doesn’t have an official role with the team. It seems unclear what techniques will work best and could be a trial and error thing once the preseason games roll around for every team.

— There will be a real punter competition as undrafted rookie Corey Bojorquez has a strong left leg and should challenge Ryan Allen, who is in a contract year. It would be a big surprise to see the undrafted rookie cut before training camp and could be a battle that goes down to the final preseason game.

— As we wrote Wednesday, it really wasn’t much of a big deal that Belichick canceled the final two OTA sessions. He’s done it in the past with the final session, just not two like this year. It should be viewed as a sign the team got as much work done that was needed to be ready for training camp. Otherwise, it’s hard to envision Belichick taking away to on-field workouts.

— Last but not least, it’s pretty clear by now the Patriots at least explored trading Gronkowski around the draft. Remember the Adam Schefter report in late April that Brady hadn’t committed to playing in 2018, although many close to him believed that he would? It didn’t make sense at the time, as it seemed like a nothing report, but now it could be seen as that was Brady leaking he might retire if Gronkowski was traded, as that was around the same timeframe. Also, as NBC Sports Boston’s Tom E. Curran and Mike Giardi reported, Belichick’s meeting with Gronkowski and agent Drew Rosenhaus occurred a few days after this and following that meeting it was made clear the tight end wouldn’t be traded and he was committed to the Patriots for 2018.