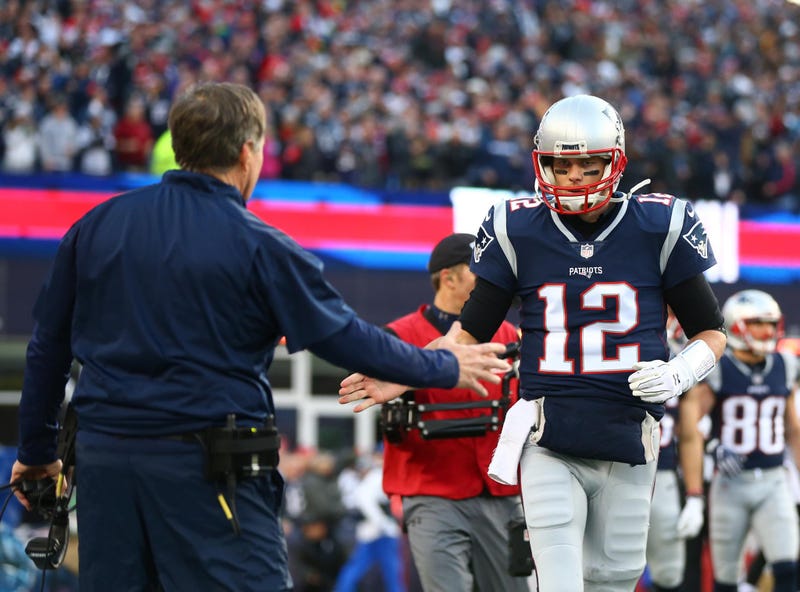 One of the biggest questions surrounding the long-term future of the Patriots is who will last longer, Bill Belichick or Tom Brady?

It’s been reported Belichick has wanted to eventually win with someone other than Brady, and Brady always has an eye on his legacy and certainly wouldn’t be opposed to winning with a coach other than Belichick.

So, who will outlast the other?

The answer to this question will likely come in two years following the 2019 season, as it is shaping up to be arguably the biggest in the history of the franchise.

As of now, Brady, Rob Gronkowski and Julian Edelman will all be free agents after the 2019 season and what they do will have major implications on the direction of the organization.

Just look at what was reported this weekend with Gronkowski. According to ESPN’s Jeff Darlington, it’s “pretty certain” the tight end will play in 2018, but as long as Brady returns as well. It seems Gronkowski is linking himself to his Hall of Fame quarterback.

This sort of already started last season when Gronkowski began working with Brady’s personal trainer, Alex Guerrero. Much of the tension within the Patriots organization was because of Guerrero and included him being banned from working inside the Gillette Stadium facility. Not only was there frustration on Brady’s end, there also was frustration on Gronkowski’s end. He was as healthy as he had been in any year of his career and yet the team had some push back towards the way he went about it.

It appears there will always be some level of tension surrounding the Patriots and Guerrero, but as of now it’s nothing that will impact what takes place on the field on Sundays with all parties involved.

Edelman also will always be linked to Brady given how close they are. Brady could tell Edelman to do anything and he would probably do it.

As of now, Brady isn’t signed for the 2020 season, which would be his 21st in the NFL and he would turn 43 years old the month before the year begins.

If he does come back for 2020, that likely means Gronkowski and Edelman would want to play as well, even if it meant taking a lesser contract just so the three could play another year together.

And how would this impact Belichick?

The coach would be 68 years old for the 2020 season and at that age, would he first of all want to continue coaching period, and secondly, would he want to have another season of dealing with the drama surrounding Brady and Gronkowski? Maybe the coach would have enough of it and call it quits.

On the flip side, if Brady retires Belichick could see it as an opportunity to prove himself without him as his quarterback and want to coach the team for at least a few more years.

All this of course is pending nothing changes over the next few years, but we don’t see any reason why it would. While some tension certainly exists, it isn’t enough to derail the franchise and impact anything on the field, especially with Kraft, one of the best mediators the game has, as the owner.

It seems Brady will decide how all this ends. If he wants to keep playing following the 2019 season, it could potentially push Belichick into retirement. But, if he does in fact call it quits, it might also mean the same for Edelman and Gronkowski and then it would be Belichick outlasting them all.

Another possibility which hasn’t been brought up is 2019 could be the final season for everyone involved. Just say the 2019 season results in a Super Bowl title, maybe neither sees any reason to continue on for another year and everyone goes out at once.

Bottom line, enjoy these next two seasons because things could be changing in a big way after that.