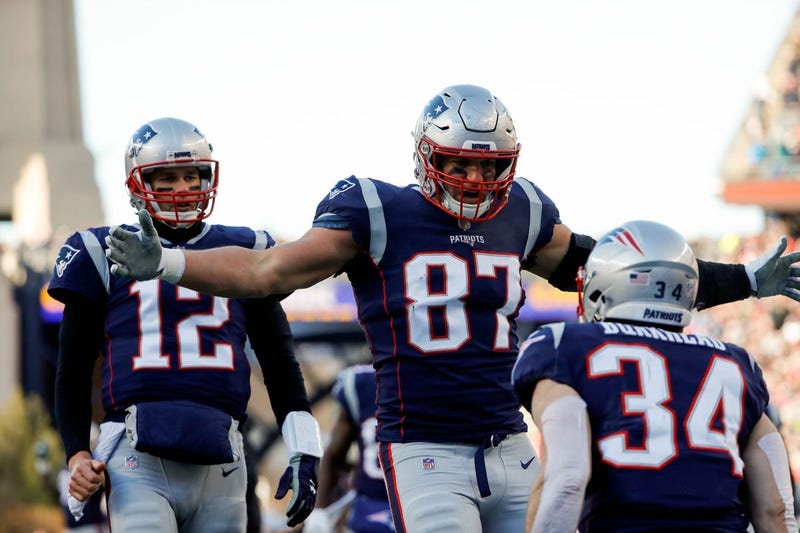 The two had just come from working out outside with other members of the team who wouldn’t play in the first preseason game, but Brady and Gronkowski walked back together — just like they do most things.

Brady and Gronkowski are very similar when it comes to things surrounding the Patriots. They are the two best players on the team, they both work out at TB12 Sports Therapy Center, they both skipped the voluntary offseason workout program for the first time in their careers this spring, and they both apparently were not happy for most of the 2017 season.

So, when it was reported Brady got a $5 million performance-based incentive tweak to his contract for this coming season, it was only natural to wonder if Gronkowski is next.

Before the tweak went into effect, Brady was going to make $15 million, which is good for being the 16th-highest paid quarterback in the league this coming season. With the extra $5 million, he will move up to the 10th-highest. While it’s not a huge increase and jump, it’s something and typically the Patriots do not like to change contracts.

Although, the Patriots did tweak Gronkowski’s contract last May by giving him performance-based incentives, which he ended up by reaching to earn the maximum amount to total $10.75 million last season. The thought was if the team wouldn’t just give him a bump in salary, it would do the same thing as last season with the incentives.

After all, he’s still underpaid compared to what other players are making. He’s the fourth-highest paid tight end in the league by having a salary this season of $9 million. This is behind Jimmy Graham, Travis Kelce and Jordan Reed -- not to mention a number of wide receivers making more than he does when they don’t even come close to his production.

But, a few weeks into training camp there hasn’t been a peep from anywhere regarding a new or updated contract.

Gronkowski didn’t have the best offseason for someone looking to get a new contract.

He skipped all the voluntary offseason workouts and also held a strange press conference at Gillette Stadium promoting a Monster motor cross event where he essentially made fun of the Patriots’ offseason program. A few days later he and his agent Drew Rosenhaus met with Bill Belichick, and after the meeting Gronkowski announced he officially would be playing this season and from there the tight end was on his best behavior.

The thought was perhaps a new contract would come a few days into training camp once he proved he’s bought into the program and still was on his best behavior. Gronkowski did all of that as he could not have been anymore business-like the first couple days of camp, but still there's been nothing.

Given Brady got performance-based incentives added, Gronkowski would likely have to get those too since it would be a bad look giving one player guaranteed money, but not the other.

Gronkowski has reason to be upset and complain if nothing gets done with his contract before the start of the season. He’s grossly underpaid and the Patriots showed they are in the business in tweaking contracts, so why not do something with the tight end?

In an offseason where Brady and Gronkowski have been so intertwined, it’s hard to believe they won't tweak the deal.