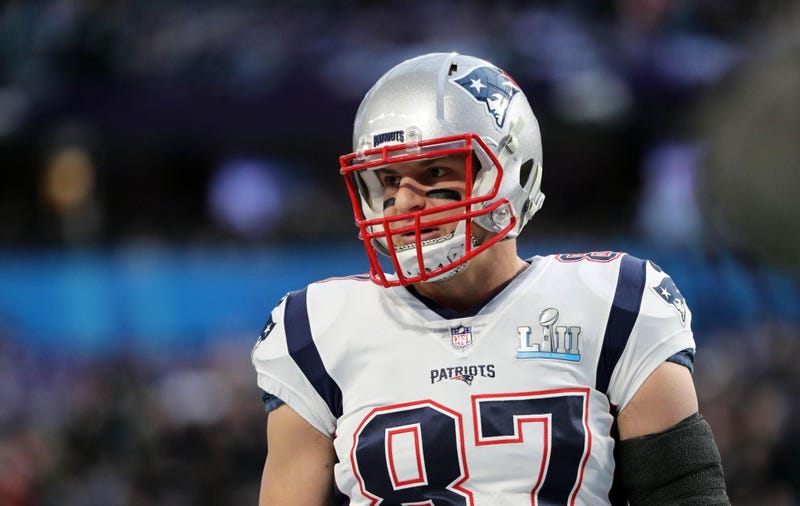 Let’s make this perfectly clear: There have been no indications the Patriots are considering trading Rob Gronkowski and we’re simply throwing it out there, but given what has taken place this offseason, it’s worth wondering what a potential trade for the All-Pro tight end would look like.

Things started to get strange immediately following the Super Bowl loss when the tight end was asked about a report of the game potentially being his last.

“I don’t know how you heard that, but I am definitely going to look at my future, for sure," he said after the game. "Sit down the next couple of weeks and see where I am at.”

Now, over a month since the game, there’s been no real indication one way or the other.

There have been cryptic social media posts hinting about potentially joining the WWE and posts indicating perhaps he doesn’t feel “happy” and “free” playing in New England. Some have speculated Gronkowski may be upset with his current contract and may want it reworked so he’s paid like he should be with all of the new deals being signed over the last few years to both tight ends and receivers.

Bill Belichick usually isn’t a fan of this behavior and given everything that has taken place with Gronkowski over the last few years (trouble staying healthy, hinting displeasure with his contract and issues with the organization), maybe he’s had enough and he’d be willing to listen to trade offers and send him out of town.

Gronkowski gave these rumors a bit of steam when he ran into a CBS Sports writer’s bachelor party in Nashville over the weekend and said he isn’t sure if he’s going to retire, but he could be playing for the “69ers” next season.

The Patriots and 49ers have made a blockbuster trade recently. The 49ers have a ton of cap space, so they could give Gronkowski a contract he’s looking for, and they also have a pretty good young quarterback in Jimmy Garoppolo that Gronkowski has plenty of experience with.

So, what would a trade for Gronkowski, who has two years left on his current contract, look like? It would probably have to start at a first-round pick and go from there.

It would probably be pretty tempting, especially once Belichick’s mind gets racing imagining the possibilities of having three second-round picks and three third-round picks in this year's draft.

The 49ers aside, it would probably take a mid-to-late first-round pick and mid-round pick to really get Belichick and the Patriots thinking about a trade.

Looking even further into the situation, Belichick was at South Carolina’s pro day this week where he met with tight end Hayden Hurst, who is one of the top tight ends in the entire draft. Maybe he’s already thinking of the future without Gronkowski, whether he gets dealt this offseason or not.

Certainly, trading away Gronkowski would be a very unpopular move both from a PR perspective and within the team, as it’s clear just how much Tom Brady loves his tight end. But, as everyone knows, Belichick isn’t afraid of doing anything and anything is possible.