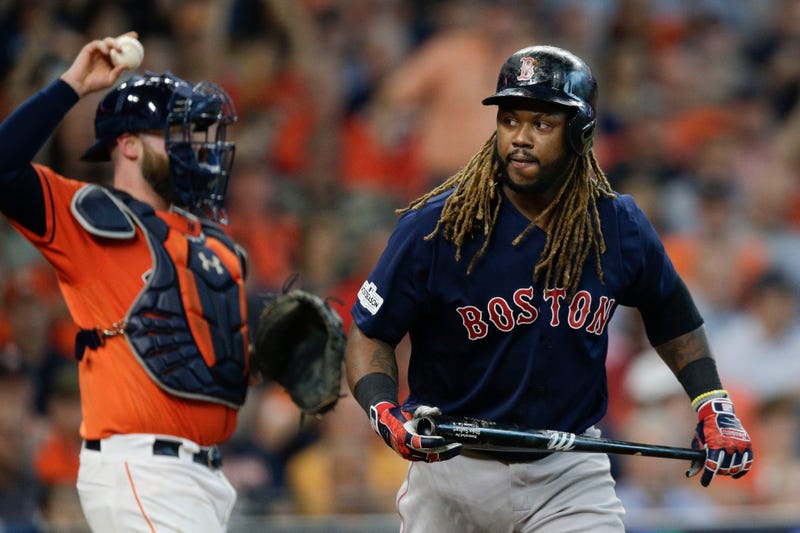 In a radio interview with us Friday night, Michele McPhee said an alleged drug trafficker FaceTimed Hanley Ramirez during a traffic stop, and claimed the ex-Red Sox slugger owned a box that was filled with fentanyl. The Boston Globe reported the same thing Sunday afternoon.

Except, the Globe provided context to the story. They obtained a court affidavit and spelled out a concrete timeline of events, plus an explanation from the suspected dealer’s attorney about why his client name-dropped Ramirez to the police.

McPhee failed to do that. Instead, she sent out an ominous tweet Friday at 5:31 p.m., saying “#HanleyRamirez, former @RedSox infielder,  has some.. well, issues. Being eyed in connection with an ongoing federal and state investigation. Stay tuned.”

It was a tease. The words “being eyed” are vague, and could mean a variety of things –– all of which carry very different implications. Maybe police looked into Ramirez and cleared him; maybe they’ve spoken to him once; maybe they’re digging through his trash and trying to obtain search warrants for his properties. We don’t know.

But McPhee’s tweet became national news, with outlets ranging from the New York Post to Sports Illustrated –– and yours truly –– writing about how Ramirez is possibly involved in a federal drug trafficking investigation.

Without filing a written story, and fleshing the report out, it was premature for McPhee to send that tweet Friday afternoon, and then spend her weekend doing radio interviews. It’s apparent she had the main details correct. An alleged Hanley drug-dealing friend did tell police he owned a box filled with fentanyl, according to the affidavit cited in the Globe.

But her speculation on Twitter and the radio –– Hanley is “being eyed,” Hanley has “issues,” the Red Sox released Hanley around the time of the alleged FaceTime call –– implies the story is much more serious than Ramirez just knowing somebody. And maybe it is. But at this point, we don’t know.

Without any court documents, McPhee didn’t have enough to go public. She obtained court records on Monday.

There are some questions about the Globe’s reporting. In the story, Shelley Murphy and Evan Allen quote an unnamed defense attorney, which is odd. Usually, attorneys are named. They also attribute their report that Ramirez isn’t under investigation to “several people with direct knowledge of the case.” That begs the question, who are these people? If they’re law enforcement officials, why aren’t they described as such? There’s a big difference between quoting law enforcement officials and members of Ramirez’s inner-circle.

There’s also the fact that John Henry owns the Globe. His ownership inherently invites skepticism into every piece of the paper’s Red Sox reporting, founded or not.

But at least the Globe put something on the written record. They didn’t engage in hype or rumormongering. McPhee did. I understand the hypocrisy in me chastising somebody for histrionic behavior. But McPhee is an accomplished investigative reporter. She teased a story about Ramirez being involved in a federal drug inquiry, and then went on to fuel the speculation.

In a phone conversation with me Monday, McPhee acknowledged she got elements of the Hanley timeline wrong. The FaceTime call did not happen May 30, which she told Ken Laird Friday night, but rather in April, as the Globe reported Sunday. That means the timing of Ramirez’s release isn’t suspicious, given what we know right now. On Friday, though, McPhee implied that was the case.

“The timing is interesting,” McPhee told Laird. “I think the fact that the Red Sox, which is a very smart organization, would eat a $15 million contract on a guy like Hanley Ramirez is telling, no?”

There have been murmurs for a while that Ramirez was possibly involved in some sort of investigation. McPhee told me she started exploring the story last week.

On Friday, McPhee shared those murmurs with the world, even though she had holes in her timeline and an incomplete picture of the questionable traffic stop. There isn’t enough information to say Ramirez is involved in any sort of drug trafficking investigation. But it’s too late. Word is already out.

Sergey Gordeev opens the segment by saying, “Think what you will about Joseph Stalin, but there's no denying this was one of the more formidable figures in all of history.”

Later, Gordeev asks the curator of Stalin’s dacha if “tourists remember Stalin as a great man in history, or dictator?”

In an email to me, Gordeev explained why he glossed over Stalin’s brutal dictatorship. “As we go through each World Cup city, we are focusing on the sights that have cultural and historical significance, or local customs and traditions that may be of interest to people visiting these cities,” he wrote. “The format of the pieces - approximately 2 minutes each - does not allow for an in-depth historical analysis, and it is not the focus of these pieces, anyway. The point is to highlight sights and places that we think may be of interest to visitors - and let them form their own opinions. The focus of this particular piece was the history of the place where Stalin vacationed, not the history of Joseph Stalin himself.

“In doing our tourist/cultural reporting, we of course, try to do our best to present an accurate picture of places we choose to highlight and their history. That is why, even considering the time limitations of a 2-minute piece, we did try to address Joseph Stalin’s controversial history by asking the curator to share her thoughts on it. She volunteered her position that it is hard for her to justify his history and choices. She also added that, though we may differ in our evaluation of history and historical figures, we must honor and own all of our history - “good” and “bad” - because, for any country or individual, its past is also part of its current identity.”

Milquetoast Mike & Mike get honored:It was announced Monday that sports radio’s most vanilla crew will be inducted into the Broadcasting Hall of Fame. Given “Get Up’s” atrocious ratings, a forced Greenberg and Golic reunion may not be far down the line.