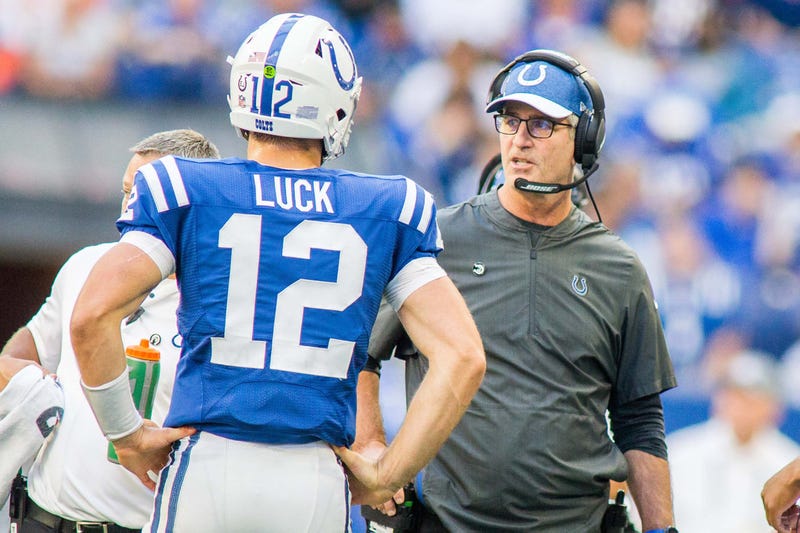 Who could forget the drama between the Patriots and Colts this offseason?

Josh McDaniels had all but been formally been introduced as the next head coach of the franchise, heck he even hired a couple of assistants, but then the night before he was supposed to be introduced he had a change in heart and backed out.

Colts general manager Chris Ballard spoke the next day, at what was supposed to be McDaniels’ introductory press conference, and concluded it with what was a shot at both the Patriots and McDaniels.

"The rivalry is back on," the GM said as he walked away from the podium.

Look at the recent meetings between the two teams. New England has won seven straight games, including the playoffs, and have outscored the Colts 285-149 in those games.

Of course, there was this thing called Deflategate that some people might recall where in the 2014 AFC championship game the Colts accused Tom Brady and the Patriots of using under-inflated footballs. It didn’t matter as the Patriots rolled to a 45-7 win and ultimately won Super Bowl XLIX.

The Patriots were clearly upset with the Colts for what happened and bringing it to the NFL’s attention and causing everything that it did. Things worked out perfectly where the two teams met the following season in Indianapolis, but what was that game most remembered for?

Chuck Pagano going for it on fourth-and-3 from the Colts’ 37-yard line with a fake punt trick play where the long-snapper was Griff Whalen because first-string long-snapper Clayton Geathers was injured in the first half. Whalen had never practiced the play so it ended up going as well as you would have suspected (a two-yard loss) and showed up on SportsCenter's Not Top 10 for months. Whalen had never practiced the play, but Pagano never factored that in.

The thing is, the Patriots and Colts did once have a rivalry.

In the 2000s Tom Brady vs. Peyton Manning was one of the best things going. From 2001-09, the teams met 12 times with the Colts winning seven and the Patriots five, and featured some of the best games in the entire NFL during that time.

There was the Patriots’ goal-line stop in Indianapolis during the end of the 2003 season and then the wild 38-24 playoff game in the 2006 season when the Colts came storming back to win at home.

Once Manning retired, the rivalry went away simply because the Colts stopped winning. Quarterback Andrew Luck admitted as much on Tuesday.

“We’re not hiding the fact what’s happened in the past,” Luck said. “But it is a new year. We’re excited for the game. We know New England is a really good team. Yeah, sure, we need to start winning. Absolutely.”

Luck was supposed to keep the quarterback battle and rivalry going, but he’s been a major reason why it has has gone away.

In five starts against the Patriots, including the playoffs, he’s completed just 52.6 percent of his passes with 10 interceptions, nine touchdowns, and a 67.9 passer rating. Looking at those numbers, it’s clear why the Colts haven’t beaten the Patriots since 2009.

As much as we like rivalries with the Patriots, to say the Colts are an actual rival is just plain wrong.