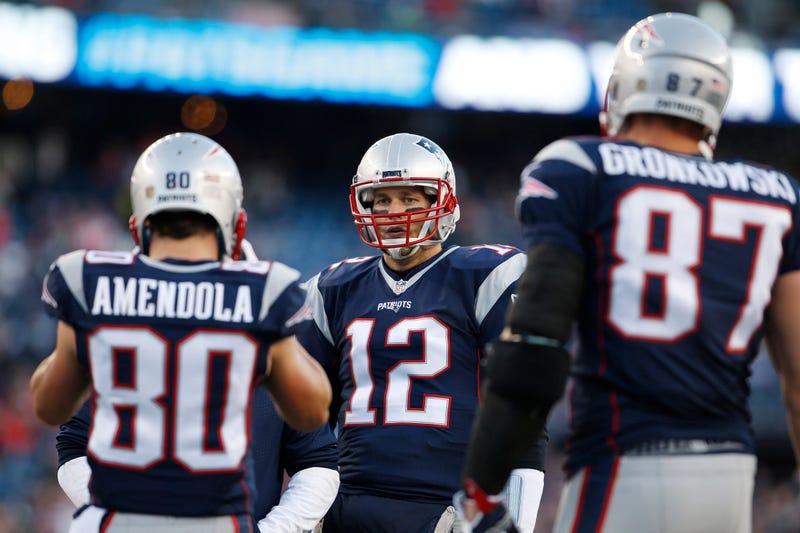 Danny Amendola’s unprecedented public rebuke of Bill Belichick lends credence to an offseason full of subtweets and subtleties. Ever since Super Bowl LII, where the Eagles scored 41 points and gained 538 yards of offense against the Patriots while Malcolm Butler sat helplessly on the bench, there have been numerous hints that players are tiring of Belichick's autocratic rule.

Amendola validated all of those signs with his words. In an interview with ESPN’s Mike Reiss, the veteran wideout, who signed with the Dolphins in free agency, detailed the team’s unhappiness with Butler’s surprise benching.

"I have my thoughts about it because I was out there putting my blood, sweat and tears out on the field that night, and one of our best players wasn't on the field," Amendola said. "To tell you the truth, I don't know why. I did ask, but I didn't get any answers. I can't make decisions like that, so I don't necessarily worry about it, but I know Malcolm is a great player and he could have helped us win. For whatever reason, he wasn't out there. He's going to play more football in his career, and he's going to be a great player for a long time.”

It’s apparent Amendola isn’t the only member of the Patriots who holds Butler in an esteemed light. When Butler released a statement on Instagram after the Super Bowl to address the benching, numerous current and former Patriots players “liked” the post. Tom Brady even commented, calling Butler an “incredible player and teammate and friend. Always!!!!!!”

Amendola went on to say he thinks the Butler decision hurt his teammates. “Yeah, I did, honestly. Nobody really got an explanation for it,” Amendola explained. “He’s a brother of ours. He was a brother of ours that year. And I hate to see a guy who worked so hard throughout the season not get a chance to play in the biggest game of the year and really get no explanation for it. With that said, I don't know how the business aspect went into that decision. I don't know how the personal aspect went into that decision between him and Bill. But as a friend, I would have loved to see him on the field that day.”

Belichick is usually able to get away with not offering explanations for his curious personnel decisions, because they almost always work out. The Butler benching, of course, did not. There were numerous instances in that game –– Alshon Jeffery’s touchdown over Eric Rowe, Johnson Bademosi’s missed tackle on a crucial third down in the second half –– where Butler's presence likely would've made a difference. After the contest, Butler told reporters he “could have” changed the outcome.

It appears as if Amendola reached a breaking point with Belichick last season. Amendola, no longer satisfied with taking pay cuts, wanted to be financially rewarded for his incredible playoff run. He inked a two-year deal with the Dolphins worth $8.25 million in guarantees, which he says far exceeded anything the Patriots had offered.

"When free agency broke, I came to the realization that (Belichick) wasn't going to really come close to any of the other offers I had," Amendola said. "I had to make a decision for my family and go down to Miami and continue my career there.”

In other words, football is a business, and Amendola made a business decision. Rob Gronkowski, who’s reportedly still contemplating his future and will miss the first day of offseason workouts, retweeted a message from Deion Sanders over the weekend that reiterates those sentiments.

“All athletes please understand this is a business 1st. Nothing comes b4 the business part of professional sports,” it reads.

Gronkowski has used Amendola’s signing with the Dolphins as a conduit to express his own seeming unhappiness with Belichick’s operation. When Amendola announced his move on Instagram, Gronk told him to be “be happy and free.”

That reportedly ticked off Belichick.

Brady appeared to co-sign Gronkowski’s message, writing that his advice to Amendola was "well said." At the end of “Tom vs. Time,” Gisele Bundchen delivers a monologue about how her husband wants to “feel appreciated” at work –– an apparent dig at the demanding environment inside of Gillette Stadium. In the series' closing monologue, Brady hinted he was losing his "conviction" to play football.

Though Brady will seemingly be back for the 2018 season, it looks like he will be spending less time under Belichick’s thumb. ESPN’s Jeff Darlington reports Brady won’t be a “regular participant” in the team’s offseason program. Instead, Brady is expected to workout with his personal guru, Alex Guerrero.

Brady's and Gronkowski's anticipated absences from the offseason program mesh with months' worth of reporting –– dating back to Seth Wickersham's exposes for ESPN. Earlier this offseason, NBC Sports' Tom Curran reported Gronkowski was so downcast in Foxboro last year, he contemplated retiring during training camp. Curran's colleague, Mike Giardi, added that Belichick is making the Patriots' core players "miserable."

Amendola told Reiss how difficult it is to play for Belichick. "It's not easy, that's for sure. He's an a--h--- sometimes. There were a lot of things I didn't like about playing for him, but I must say, the things I didn't like were all in regards to getting the team better, and I respected him," Amendola said. "I didn't like practicing in the snow, I didn't like practicing in the rain, but that was going to make us a better football team and that was going to make me a better football player. It wasn't easy, and he'd be the first to admit, at the (Super Bowl) ring ceremony, that it wasn't easy playing for him. The silver lining was that we were at the ring ceremony.”

But this year, the Patriots weren’t at the ring ceremony, and Belichick might be to blame. It sounds like that was the breaking point for Amendola. Brady and Gronkowski appear to be getting there, too.