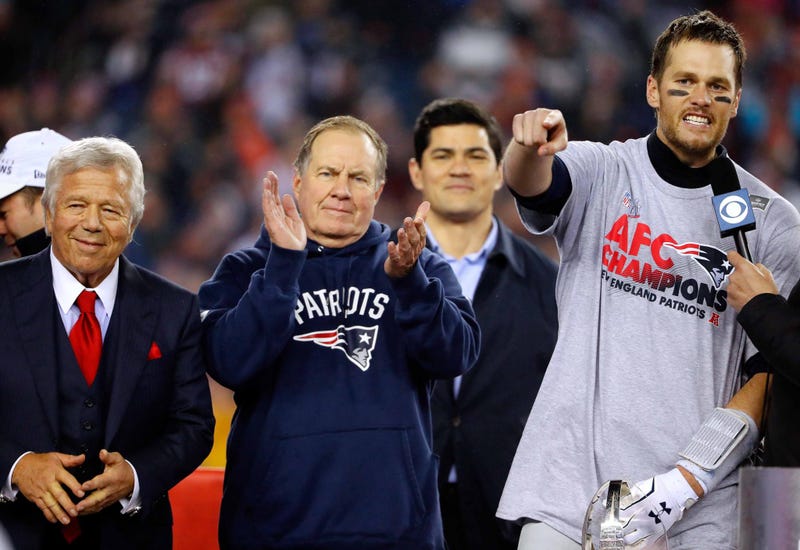 Robert Kraft, Bill Belichick and Tom Brady have each issued varying denials about ESPN’s explosive story regarding the alleged rift between them. Author Seth Wickersham, whose account has been disputed by multiple Patriots beat writers, continues to defend his reporting in interviews across all mediums.

All four men are believable if you want to believe them. They also contradict themselves at times, except Brady, who wasn’t asked about any specifics in his weekend chat with Jim Gray on Westwood One. The real questions for Brady will begin Tuesday on “Kirk & Callahan.”

The Patriots issued a joint statement with Kraft, Belichick and Brady late Friday morning, just hours after the Wickersham story had dropped. “In recent days, there have been multiple media reports that have speculated theories that are unsubstantiated, highly exaggerated, or flat out inaccurate,” it reads. “As our actions have shown, we stand united.”

Despite its strong language, the statement does not address anything. On “Dale & Holley with Keefe” Friday, Wickersham said he knew the Patriots were going to publicly rebut him. At this point, the Patriots offered all buster and no substance. (Ditto for Brady and Garoppolo’s agent, Don Yee, whose statement didn’t mention the content of the report.)

The first substantial denial from the Patriots camp arrived Saturday, when Kraft spoke to the MMQB’s Peter King. The owner denies he held a half-day meeting with Belichick about Brady’s future, which is detailed in the ESPN article. Sources say that’s when Kraft told Belichick to trade Jimmy Garoppolo.

“A total fabrication and fiction. I am telling you, it’s fiction," Kraft told King.

According to King, the Patriots are “apoplectic” over the report, likening it to their reaction over Deflategate.

That’s pretty forceful. Kraft makes less sense, however, when talking about the Garoppolo situation as a whole. He claims he was “taken aback” when Belichick said he had dealt Garoppolo to the 49ers, but also recognizes how difficult it would have been to keep both quarterbacks going forward.

That begs the question: if Kraft knew holding onto both was seemingly impossible, why was he surprised when Belichick traded Garoppolo? Also, Kraft says he last spoke to Belichick about Jimmy G’s future in June. That seems unbelievable, considering it was the most important long-term issue in the organization.

Saturday night, Brady spoke in generalities about the working environment in Foxborough and his relationships with Kraft and Belichick. Wickersham reports several bombshell revelations about Brady, including the quarterback’s alleged glee when Garoppolo was traded. But Brady wasn’t pushed on any of them. It was the definition of a friendly landing spot.

Perhaps the most telling response has been Belichick’s, given his judicious approach with the media. He says he’s “absolutely” returning to the Patriots in 2018. Since Belichick rarely provides any insight into his personal thought process, his empathic statement can be taken as a virtual guarantee. While Wickersham never reported Belichick was going to leave next season, his article explores the supposedly dark feeling inside Gillette Stadium this year that it is the “beginning of the end” of the Patriots dynasty.

But if Belichick stays with the Patriots for the foreseeable future, then the ominous nature of the article seems overblown.

In his weekly interview with “Dale & Holley with Keefe,” Belichick also said it is “absolutely not true” he met with commissioner Roger Goodell last week, which is reported in the ESPN piece. “The last time I saw the commissioner was before our game against the Raiders in Mexico City,” he said.

The NFL denied that meeting took place as well.

Two forceful denials about the same meeting make it appear as if Wickersham’s sources were wrong, which raises questions about whether other fantastical anecdotes (Garoppolo getting locked out of TB12, Brady offering snide remarks about Belichick to players).

In addition, Belichick said he has “great” relationships with Kraft and Belichick, which must be comforting for Patriots Nation to hear. But there is one big contradiction to Belichick’s rebuttal: he’s stated numerous times he hasn’t read the piece. But with DHK, he mentioned he enjoys a “good relationship” with Alex Guerrero, which he acknowledges is referenced in the article.

There are two problems there: firstly, if Belichick has a "good relationship" with Guerrero, it's bizarre he banned him from the sidelines. Belichick has never denied that story.

And, how would Belichick know something was in an article he hasn't read? It seems uncharacteristic for Belichick to make statements to the media based off second-hand accounts.

As for Wickersham, he got tripped up a couple of times with K&C Monday. He refused to elaborate on how many players he spoke to, and also fumbled over whether Kraft and Belichick met for half of a day in mid-October. At first, he denied that anecdote was in the story. When Kirk Minihane read Wickersham’s wording back to him, he reversed his denial.

Wickersham did strongly back up several disputed aspects of his reporting, including whether Belichick and Goodell met last week.

There are holes in every explanation and defense surrounding this story, because there are so many layers to it. But the central premise, that Belichick was forced to trade Garoppolo, may have been supported Monday by the coach’s response when asked about it.

"I havent read the article,” he said. “I already commented at length on that situation and I don't have anything to add to it.”