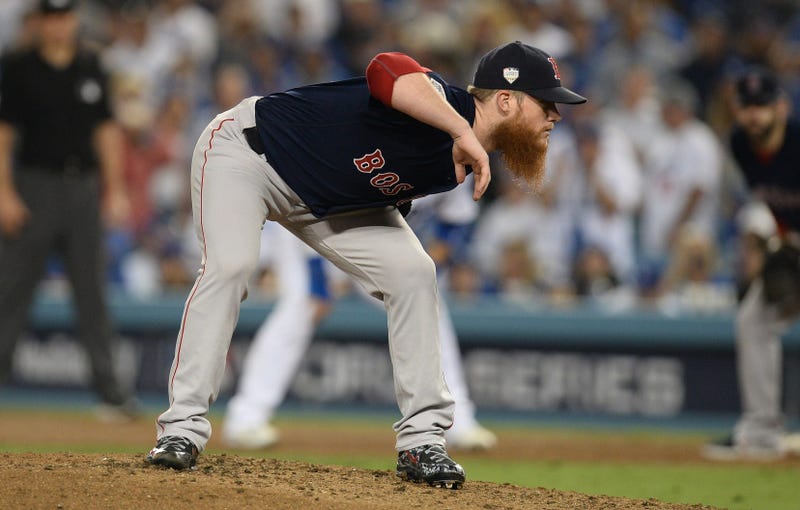 MLB's messed up offseason is impacting some pretty good players, but Craig Kimbrel isn't one of them.

The market is getting him just right.

The erstwhile Red Sox closer started free agency with some pretty aggressive demands, reportedly in the range of six years and $100 million. To quote the late, great Edna Krabapple, "HA!"

Whatever, that's fine, it's called negotiating. Better to start too high than too low. In the ensuing weeks, however, his market his gone drier than an L.A. county aquifer.

The Phillies became the latest potential suitor to evaporate after they agreed to a two-year, $23 million deal with former Yankees and White Sox closer David Robertson. They were considered contenders for Kimbrel, who has now seen his market shrink to the Braves and Red Sox, with the vaunted "mystery team" always a possibility, as colleague Rob Bradford noted recently.

Some have bemoaned Kimbrel's meager market as another sign that baseball's offseason is broken, and there's some merit to that argument, especially as we march towards another flurry of February signings. But we should also consider the possibility that teams have gotten smarter and recognize Kimbrel for what he is: a bad investment.

ESPN's Keith Law rated Kimbrel as the No. 40 (FORTY!) free agent in this year's class, placing him one spot in front of old friend Joe Kelly and one spot behind older friend Clay Buchholz. "Kimbrel has reached a point in his career where his reputation as a Proven Closer exceeds reasonable projections for his performance," Law wrote. "You might pay him thinking the 2017 version of Kimbrel will resurface, but his body of work as a whole, his age and the general career trajectory of one-inning relievers say he probably won't."

It doesn't take a conspiracy or collusion to pass on Kimbrel! He's coming off a disastrous postseason that should've scared every team in baseball when he quite literally turned into a puddle -- the sweat pouring off his forearm in Yankee Stadium could've filled the aforementioned aquifers.

Kimbrel saw his strikeout rate drop and his walk rate skyrocket. His 2.74 ERA was the second-highest of his career and he walked more than 12 percent of the batters he faced for just the second time since his rookie year.

His playoff performance represented a red flag like the one they unfurl from the Monster on opening day. He walked eight, hit two, and allowed two homers in 10 2/3 innings, pitching around 19 baserunners. It's a small sample, but an important one -- any contender contemplating Kimbrel is fair to ask how far its money will go in October, especially since he was on the mound for the go-ahead and insurance runs when the Red Sox were eliminated by the Astros in 2017, too.

Even at his best last season, Kimbrel routinely felt one misaligned lug nut from flying off the chassis. As he approaches his 31st birthday, he has yet to demonstrate a willingness or aptitude to pitch anything beyond one inning in a save situation, which makes him a dinosaur in a game that increasingly values mix-and-match bullpen flexibility.

With looming decisions in the form of Mookie Betts, Xander Bogaerts, Jackie Bradley Jr., Chris Sale, and J.D. Martinez threatening to strain the team's payroll, the Red Sox would be foolish to throw $50 million or more at Kimbrel when they possess internal options like Matt Barnes and Ryan Brasier who could do the job for a fraction of the cost, and maybe even not a fraction of the performance.

(Seriously, check out Barnes' numbers last year -- almost identical to Kimbrel's everywhere except ERA -- and note that Barnes was also far more reliable in the playoffs).

The Red Sox, in other words, appear to be getting out at just the right time. It would be a shame if they dove back into the Kimbrel market simply because he's still there.