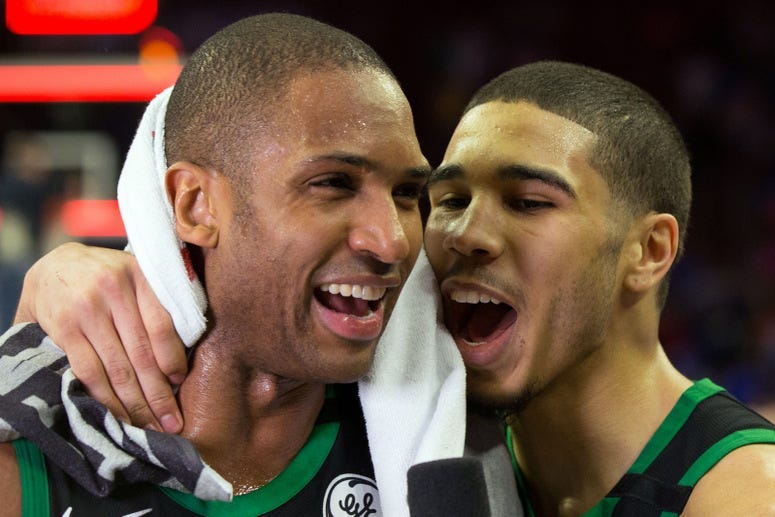 Danny Ainge has conditioned Celtics fans never to settle for the team in front of them when the one that's going to hang Banner 18 could be just around the corner.

Maybe Kawhi Leonard is the missing piece. Maybe it's Anthony Davis, though that now feels particularly like fantasy. Maybe it's whomever they take with Sacramento's lottery pick next year.

What's clear is the current team is never quite good enough. That's why Evan Turner is in Portland, Kelly Olynyk's in Miami, and Isaiah Thomas is in parts unknown. Ainge is always chasing the next upgrade.

But here's a thought we haven't considered -- what if the Celtics have already built their championship roster, and we're looking at it?

Forget about 2018. I'm not mainlining green Kool-Aid. If the Pacers and Raptors can't dispatch the LeBrons with full rosters, then the undermanned Celtics probably won't, either. (Although the way this season's going . . .) And even if they did, there will be too much firepower awaiting them in the Finals, whether it's Golden State or Houston.

But after watching the C's outlast the Bucks and then pummel the heavily favored Sixers without what feels like half of their regulars, it's fair to ask if the current roster, plus a healthy Kyrie Irving and Gordon Hayward, is championship caliber.

And the answer is most definitely yes.

Even without Hayward, the C's played the Warriors and Rockets to a standstill this season, splitting with both squads and taking each to the final minute on the road. At some point, we need to recognize them for what they are -- one of the toughest outs in the league despite losing their max-contract free agent five minutes into the season.

The Celtics went 10-6 against Western Conference playoff squads, beating all of them except the Pelicans. And each time -- whether it was dropping the Dubs in the middle of a 16-game winning streak, drawing two charges in the final seconds on Houston's James Harden, or shocking the Thunder and Jazz at the buzzer -- there was always a, "Yeah, but."

Yeah, but the Warriors and Rockets would crush them in the playoffs. Yeah, but they got lucky without Irving against the Thunder and Jazz. Yeah, but this is a regular-season story only.

It's time to ditch the qualifiers, especially with the Celtics on the verge of sweeping the Sixers right into the summer. If they win Game 4 on Monday night, they'll buy some rest for players like Marcus Smart (thumb) and Jaylen Brown (hamstring), not to mention iron men Al Horford and Terry Rozier, before a rematch with the Cavs.

If those aren't the names you expected to lead a deep playoff run, join the club. But also remember that next year, Irving and Hayward should return, along with solid young big man Daniel Theis.

Imagine a starting five of Irving, Brown, Hayward, Jayson Tatum, and Horford, with Rozier, Smart, Marcus Morris, Theis, Aron Baynes, and Semi Ojeleye off the bench. Imagine head coach Brad Stevens, who might be the MVP of the postseason, with all of that talent at his disposal.

After Ainge remade the roster last summer by acquiring Irving and Hayward, the consensus was that they still weren't good enough to beat the Cavaliers, and definitely not the Warriors. It's now clear this take was laughably wrong.

Thanks to the emergence of Brown and the lightning quick development of Tatum -- who is taking his game to another level in the playoffs -- the Celtics played better basketball than Cleveland all year even without Hayward. And now, as they face a presumed conference finals rematch without Irving, too, the expectation is that they'll still give Cleveland a much better series now than they did a year ago.

Brown is making good on his ceiling as a Paul George clone, and as he improves his ball handling, it's  scary to think how dangerous he'll be as a finisher and 3-point bomber. Tatum, meanwhile, has barely scratched the surface. He's averaging 18 points a night in the playoffs as a 20-year-old. This isn't supposed to happen. The only other players to do so over at least 10 postseason games were Bradley Beal with the 2014 Wizards and Magic Johnson as a Lakers rookie in 1980. Tatum is taking and making some of the biggest shots of the postseason, including two buckets over Sixers All-Star Joel Embiid in Saturday's Game 3 comeback.