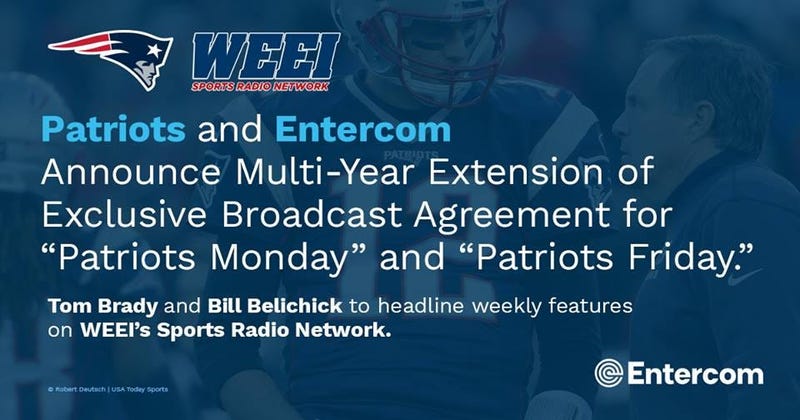 “As the voice of New England sports, we’re proud to extend our partnership with the New England Patriots, an elite organization that like Entercom, is committed to bringing WEEI listeners and Patriots fans the compelling sports content they seek,” said Mark Hannon, Senior Vice President and Market Manager, Entercom Boston.

“Entercom is enthusiastic of and committed to its role as the nation’s premiere sports audio producer,” said Chris Oliviero, Executive Vice President of Programming, Entercom. “Continuing this winning combination of WEEI and the Patriots, one of Entercom’s over 40 professional team partnerships, is a strong sign of that commitment and passion to our listeners.”

“Continuity is one of the keys to the Kraft family’s success, and we are proud to have partnered with WEEI for more than two decades to broadcast Patriots Monday and more recently the addition of Patriots Friday,” said New England Patriots Vice President of Corporate Sales Murray Kohl. “We are happy to extend our agreement with WEEI and look forward to many more years of success together.”

Brady will kick off “Patriots Monday” with a weekly appearance on WEEI’s top rated morning show, “The Kirk and Callahan Show,” which airs from 5:30 a.m. to 10:00 a.m. ET. Belichick will wrap up “Patriots Monday” with his weekly appearance on “The Dale and Holley with Keefe show,” airing from 2:00 p.m. to 6:00 p.m. In between, “Ordway, Merloni and Fauria” hosted by Glenn Ordway, Lou Merloni, and two-time Super Bowl champion and former Patriots tight end Christian Fauria, will continue to feature Patriots captains and veteran leaders who will be available to discuss the most recent game. The show airs from 10:00 a.m. to 2:00 p.m. The “Patriots Friday” lineup will feature additional Patriots players to preview the upcoming game.

The partnership between the Patriots and WEEI began in 1995 with “Patriots Monday” and expanded to include “Patriots Friday” during the 2008 season. The fan-favorite Patriots programming ensures Tom Brady’s appearance on WEEI for years to come. Fans can tune in to WEEI Sports Radio Network on Radio.com and can also participate in the sports conversation via Facebook, Twitter and Instagram.

WEEI Sports Radio Network is a part of Entercom, a leading American media and entertainment company and one of the top two radio broadcasters in the country. Entercom is the flagship home of more than 40 professional teams across the four major sports and numerous college athletic programs and the nation’s unrivaled leader in news and sports radio.