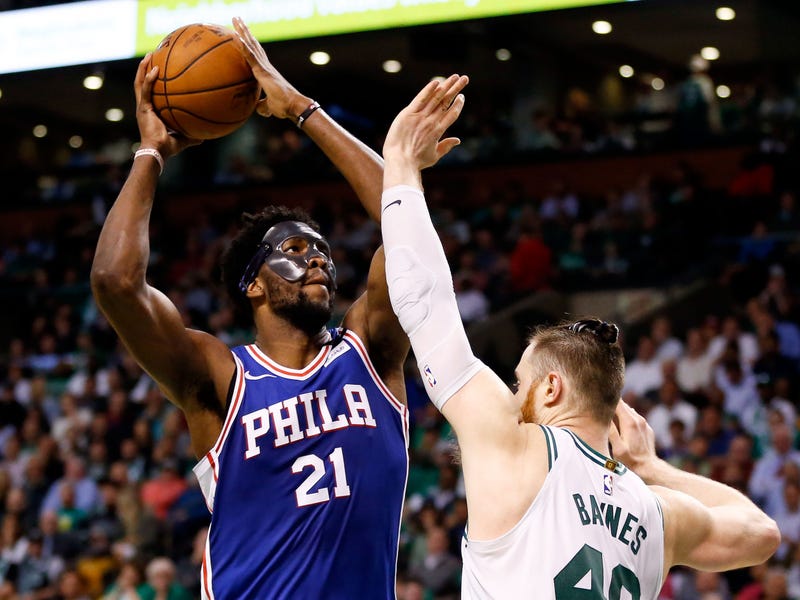 Aron Baynes, who spent the first five seasons of his NBA career toiling in obscurity, stopped Sixers center Joel Embiid in the post at the end of the fourth quarter to help the Celtics clinch their series-winning Game 5 victory Wednesday.

There isn’t a single sentence that embodies Brad Stevens’ Celtics more than that.

The Celtics have advanced to the Eastern Conference Finals without Gordon Hayward and Kyrie Irving, thanks to brilliant play and coaching from an overachieving group. The contributions from Al Horford, Jayson Tatum, Jaylen Brown and Terry Rozier are lauded on a daily basis. Marcus Morris and Marcus Smart, who played a perfect Marcus Smart game Wednesday, have received their rightful praise as well.

But every player on Stevens’ squad plays a role. On Wednesday, Baynes showed how he’s grown into a valuable member of the supporting cast.

The most striking addition to Baynes’ game is his newfound three-point range. Prior to arriving in Boston, the 6-foot-10 big man took a total of seven shots from beyond the arc in five seasons –– making one of them. This season, he tripled that total, jacking up 21 threes. Baynes was successful three times.

It’s easy to cringe when Baynes shoots the ball from long distance. His regular season futility from three-point range indicates the trepidation is warranted. But he’s been a different player this postseason. Baynes, 31, gave the Celtics the lead with his three-point field goal in the second quarter Wednesday. He’s gone 9-for-19 from three in the playoffs, meaning he’s nearly making 50 percent of his long balls.

In the series against the Sixers, Baynes drained more three-pointers than Marco Belinelli, Robert Covington and Dario Saric.

-- @aronbaynes pours in 13 points and 9 rebounds in the #Celtics' Game 5 win over the #Sixers #CUsRise pic.twitter.com/guN9SJagXy

It’s not unprecedented for a player to expand his range as his career progresses. Horford, for example, only attempted 65 threes over his first seven years in the NBA. He’s shot more than 200 in each of the last three seasons.

But Horford is an All-Star caliber player with a max contract. Baynes signed a one-year deal last summer and was lucky to get a spot on the team out of training camp. His growth has been incredible, and in some ways, inexplicable.

But then again, it’s not unusual for Stevens to turn fringe players into dependable contributors. He pulled the same trick with Jae Crowder, Jonas Jerebko and others.