FOXBORO – Patriots training camp seemed to begin to hit its stride Sunday afternoon on the fields behind Gillette Stadium as the hitting heated up a bit under sunny skies and warm temperatures.

The story of the day for the full-pads session that last two-plus hours was the arrival of veteran defensive end Michael Bennett. After missing the first three days of workouts, Bennett was on the field in full pads – those tiny shoulder pads he made famous in Seattle and Philly -- and seemed to take part fully in the session, including 1-on-1 pass rush drills, team segments and even goal-line action.

Afterwards, Bennett spoke with the media and said he had actually arrived in New England from his home in Hawaii earlier that morning, after dealing with a family issue that Bill Belichick was aware of and signed off on. Bennett was clearly appreciative of how his new coach handled the matter.

Beyond Bennett’s arrival and immediate impact – he made a play on the goal line and beat rookie lineman Hjalte Froholdt across his face elsewhere in team action, patting the youngster on the butt after play – the other notable news of the morning was the appearance of Celtics coach Brad Stevens and budding star Jayson Tatum. Interestingly and coincidentally Nick Nurse, the head coach of the NBA Champion Toronto Raptors, was also in attendance on the sideline.

Stevens and Tatum walked on the field with offensive coordinator Josh McDaniels and spent time chatting with various members of the Patriots and staff. Nurse spent more time by himself, but did chat with Belichick a bit late in practice. All three were on hand when the Patriots came together as a team to close out the session.

Here are some quick observations from the Patriots practice field:

--While David Andrews, Deatrich Wise and Isaiah Wynn were on all the field at various times, none is taking part in team drills at this point. Andrews did some extra running on a side field with trainer Jim Whalen at one point in practice, while Wise and Wynn were on the lower practice field doing conditioning work during the team segments late in the session. Wise was on and off the main field a number of times. He returned with pads at one point and then was actually the last player on the field doing post-practice work on the far end by himself with a heavy bag.

--With Wynn still working his way back to health from a torn Achilles, tall veteran practice squader Dan Skipper took the bulk of the early left tackle reps on a line that also included Joe Thuney at left guard, Ted Karras at center, Shaq Mason at right guard and Marcus Cannon at right tackle. If Wynn is not ready for opening night, Skipper might be a dark horse candidate to keep an eye on for the left tackle job.

--Veteran running back Brandon Bolden was a focal point of Tom Brady’s offense throughout practice, getting plenty of early-rep carries – including on the goal line – as well as catching the ball out of the backfield.

--One particular carry in team action saw Bolden bounce out to the left side and down the sideline for a touchdown run that came, in the end, thanks to a block by rookie first-round wide receiver N’Keal Harry walling off cornerback Stephon Gilmore.

--Veteran LB Shilique Calhoun and first-year DB A.J. Howard were the first players on the field.

--Players on both sides of the ball displayed a lot of energy – seemingly singing and dancing – when the music started booming for pre-practice stretching.

--Bennett had to get his ankle re-taped at one point early in practice, but it didn’t seem to be an issue.

--During some team segments the coaches had Howard, who was playing in the slot on the scout team defense, wear a yellow pinny (or is it pinnie?) for some plays and not for others. He was the only player to don a pinny during the segment, potentially serving as a personnel key for the quarterbacks/offense to adjust to.

--The session took place in front of a somewhat smaller crowd, with some small scattered areas of open seats in the bleacher beside the fields.

--For the second straight workout undrafted rookie tight end Andrew Beck seemed to grab at and flex his right hamstring during the session, but the Texas product hasn’t appeared to miss any reps to this point.

--Veteran safety addition Terrence Brooks has been taking reps with the top secondary, lining up at times in various pairings with Devin McCourty and Patrick Chung. As such, Duron Harmon has taken less top reps, at times working with Obi Melifonwu. It’s way too early to read anything into the reps, but Brooks might offer depth on defense beyond his obvious impressive special teams track record.

--The defense definitely got the better of the offense during the goal line reps. The front – led by Mike Pennel and Ja’Whaun Bentley – blew up the offensive line and fullback James Develin on the first run of the drill. Overall the defensive side controlled the line and celebrated as one might expect.

--Tom Brady had a nice completion to a crossing Braxton Berrios in one early team drill, the second-year wide receiver losing Jonathan Jones in coverage.

--Maurice Harris had another strong day, the veteran receiver catching a lot of balls, including some thrown low and behind him. It’s still early, but the newcomer at the thin position is well on his way to earning not just a roster spot but maybe a role among the top receivers on the depth chart.

--Another aspect beyond goal line work that made the practice more physical was a 1-on-1 tackling drill. It had a ball carrier and a defender lined up very closely, the tackler looking to make a quick strike on the whistle. The first rep include a pretty impressive collision in short space between Matthew Slater, the tackler, and Phillip Dorsett. Unlike many modern practice tackling drills, the defenders took plenty of ball carriers to the ground in this one.

--During field goal and PAT work – both on the side field and the team field – veteran punter Ryan Allen did the holding for Stephen Gostkowski. It will be interesting to see how much/when strong-legged rookie punter Jake Bailey gets into the holding action as he makes a bid to win the punting job.

--Though it was good news for Skipper that he got top reps in team action at left tackle, he struggled a bit in 1-on-1 drills.

--During a special teams segment focused on kickoff coverage, the returners back deep for the scout team were Dorsett, Berrios, Ryan Davis and Damoun Patterson, in that order.

--During most defensive drills the opening trio of linebackers were Dont’a Hightower, Jamie Collins and Kyle Van Noy.

--Brady continues to work to build a rapport with his new targets, at one point connecting on consecutive completions in team drills with Harris and then Harry before returning to a more familiar face in Dorsett.

--Bolden had an extremely impressive catch on a screen pass to the left from Hoyer as the veteran had to jump and spin back toward the line to catch the ball with just his left for the reception. It worked out, but it wasn’t as it’s drawn up and could have been an ugly situation.

--Jakobi Meyers may be a guy keep an eye on as an undrafted rookie at the thin receiver position, but he was late to arrive to the huddle for third-team reps with Jarrett Stidham during team action. Not a good way to get noticed.

--Brady completed a TD to Harris right at the goal line late in practice in team action, scoring just in front of Devin McCourty.

--Melifonwu had an interception on a Hoyer pass in the red zone late in the practice.

--Hoyer also had a run a penalty lap after falling, bumbling and fumbling on a handoff.

--Brady did his usual post-practice work on the far end of the field. Today the new wrinkle was having rookie edge player Chase Winovich – a fellow Michigan alum – take part by hitting the aging quarterback with small bag after he threw a pass. Winovich seemed to be a bit gentle and hesitant on the first rep, but picked up the violence, likely at Brady’s direction, after that to simulate a post-throw hit in game action.

--Those players speaking with the media after practice included Bennett, Winovich, Stidham, Damien Harris and others.

--The Patriots are scheduled to hold a practice inside Gillette Stadium on Monday night at 7 p.m., an event that’s open to season ticket members and Foxborough residents only. The session will take place after a ceremony to induct Rodney Harrison and Leon Gray into the Patriots Hall of Fame that begins at 4:30 p.m. That ceremony is free and open to the public in the plaza outside the Hall. 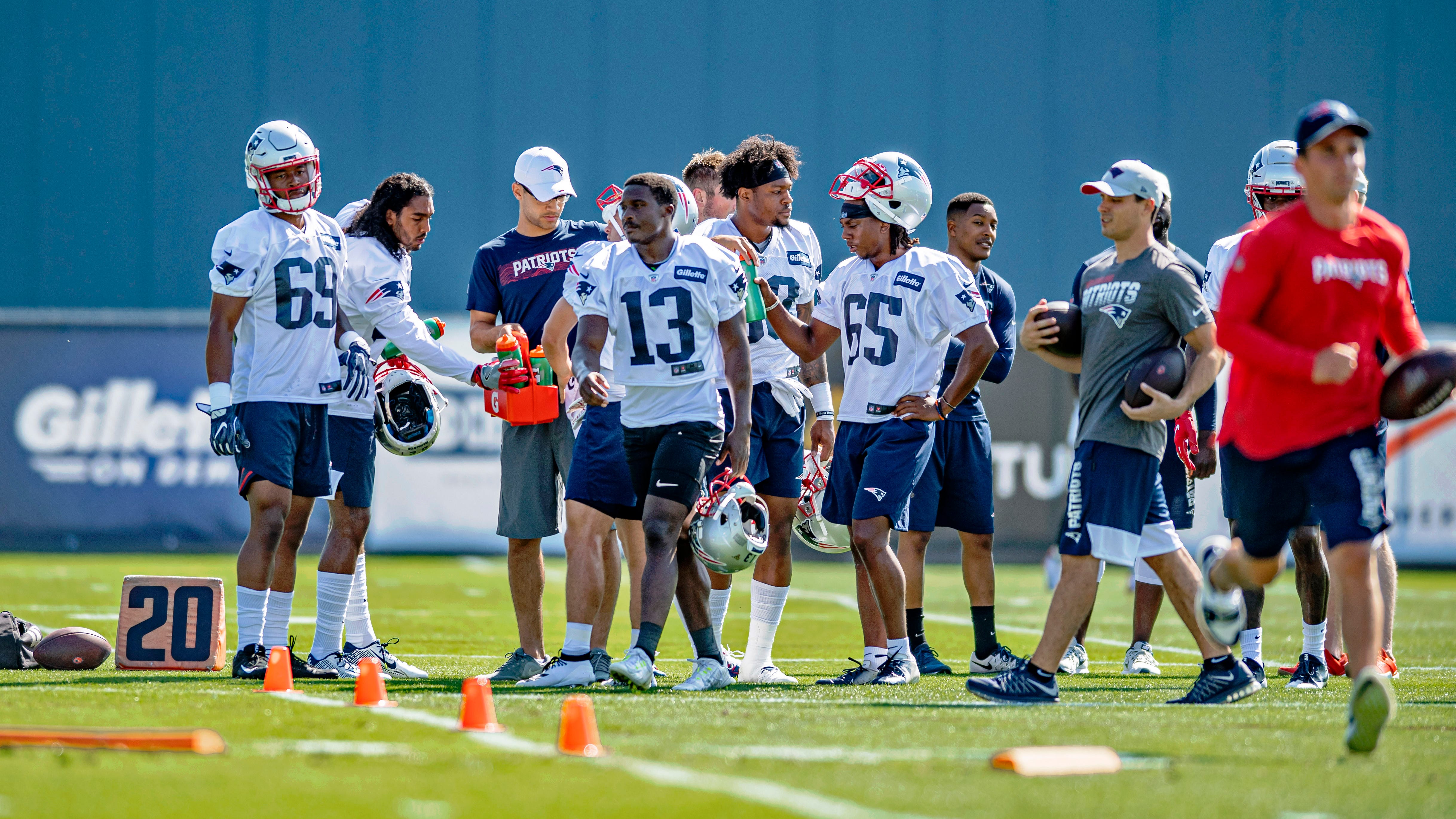