FOXBORO – Temperatures heated up Wednesday morning on the practice fields behind Gillette Stadium for the sixth practice of New England’s training camp, the third in full pads.

With temperatures in the 90s, bright sun and humidity, it was easily the most challenging environment of the summer for the defending Super Bowl champions. But, as Bill Belichick has said in the past, it’s supposed to be hot in training camp.

While plenty of players seemed to fight the conditions a bit – especially the offensive and defensive linemen – it’s hard to blame the inconsistencies of rookie first-round wide receiver N’Keal Harry on the weather. As has been the case through the first week of camp, the youngster once again struggled to catch the football at a high level.

Wednesday, he balanced out a nice catch beating tight Jason McCourty coverage – Harry bodied up the veteran corner and showed strong hands on the ball from Brian Hoyer – with more ugly drops.

The most problematic play of the day for Harry came in a hurry-up drill late in the practice with Tom Brady trying to lead the offense into position for a possible game-winning field goal. Harry ran a nice out-breaking route and actually created separation, only he dropped the perfectly-thrown ball from Brady that would have set up a field goal attempt.

Harry obviously has impressive size, but his route-running, hands and ability to separate continue to be an issue for the young receiver who’s running with the first unit and could very well be counted on to be a top target to open his rookie season.

Beyond Harry’s issues, the veteran New England defense has continued to get the better of the Brady-led offense early camp.

Speaking with the media after practice, Brady acknowledged that it’s difficult to throw on the Patriots secondary right now, a battle that should benefit the offense in the long run, but admitted that the day’s struggles were frustrating.

Here are some quick observations from the Patriots practice field:

--Members of the coaching staffs from Harvard and Holy Cross were on hand for the workout that lasted about two hours.

--The safeties all worked on high-pointing deep interceptions early in practice and struggled to catch the ball, with Malik Gant, Chung and Duron Harmon dropping the ball on three consecutive reps.

--Harry’s struggles with drops have come in almost every type of segment early in camp, from 1-on-1 and positional drills (again today) into 7-on-7 and 11-on-11 work.

--Troy Brown continues to work with the wide receivers and return men throughout camp practices.

--There were some competitive battles between the receivers and corners in early 1-on-1 drills. Phillip Dorsett beat Stephon Gilmore with ease on one rep only to see the corner make a late breakup on their next rep together. J.C. Jackson and Harry have some good battles in these drills, with the rookie receiver bodying out the corner for a catch on one early slant rep.

--Michael Bennett again seemed to have an issue with the tape job on his ankles/feet. He spent a good portion during the middle of practice taking the tape off both feet and working with a member of the training staff. It doesn’t appear to be a real health issue, but rather the actual tape job. It has been an issue in at least two practices for the veteran newcomer.

--First-year DB A.J. Howard continues to wear a yellow pinny during early practice team action while playing in the slot. He takes the shirt on and off during the segment, seemingly as some sort of key for the offense.

--Lance Kendricks walked off the field and back down the steps to Gillette relatively early in practice. He was accompanied by a member of the medical staff carrying the tight end’s helmet. While the staff taking a player’s helmet during game action can indicate a head issue, it’s hard to say that the same is true in camp action. Kendricks didn’t have any obvious sign of injury.

--The entire scout offense had to run a pair of penalty/punishment laps following a team drill with the defense. That was bad news for newly-signed undrafted rookie offensive lineman Martez Ivey. The youngster couldn’t even make it around the goalposts once before he had to stop jogging. He continued, laps that took much longer than the rest of the group that included an assistant line coach, doing what might be best described as walking while swinging his arms. It was extremely hot, but it doesn’t appear that Martez arrived in the best of shape. To his credit, he did finish the day and do some 1-on-1 work with Dante Scarnecchia at the far end of the field after practice.

--Dan Skipper continued to take reps at left tackle with the top line unit and Brady. The bad news is that he had a tough day, both in 1-on-1 drills and team action. Skipper was beaten by speed off the edge in 1-on-1s by Shilique Calhoun and then run over by Ufomba Kamalu on a power move on the next rep. He also seems to struggle to bend and keep his feet. The long former practice squader is very much a work in progress at a major position of need right now.

--Isaiah Wynn continues to take part in some drills, but has yet to do any 11-on-11 reps. Wynn spends a portion of practice on the lower field doing conditioning work as he comes back from a torn Achilles.

--While Wynn remains limited, both Sony Michel and David Andrews ramped up their practice work on Wednesday. Both took part in 11-on-11, padded dills for the first time. Andrews took a few reps in team before giving way to Ted Karras.

--Undrafted rookie receiver Jakobi Meyers made a really nice jumping catch to beat Keion Crossen on a throw from Jarrett Stidham. While neither is getting much in terms of high end reps, Meyers and fellow undrafted rookie Ryan Davis have both shown something early in camp action at the wide open wide receiver position.

--Patriots owner Robert Kraft was on the field to watch a portion of the practice.

--While Cowart returned to the practice field, he spent a lot of time working by himself on the far end of the field with a one-man sled. He also spent time on the lower field.

--During special teams work the group of receivers on the side field with Brady and Hoyer included Harry, Michel, James White, Ben Watson and Meyers.

--During punt return drills the men back deep were, in order, Braxton Berrios, Gunner Olszewski, Dorsett and Maurice Harris. Chung joined the group of returners later in practice.

--Rex Burkhead had a limited day, spending a portion down the lower field doing conditioning/rehab-type work.

--Cedrick Lang, Keionta Davis, Tyree St. Louis, Matt LaCosse, Chase Winovich and others had to run penalty punishment laps for infractions in 1-on-1 and team drills.

--Undrafted tight end Andrew Beck has gotten some reps lined up as a traditional I-formation fullback in in drills with the reserve units.

--For the second time in camp, rookie punter Jake Bailey got involved with holding for Stephen Gostkowski’s field goal attempts, including those in the run-on, game-ending situations that came late in practice.

--Brady had to hold onto the ball forever in the hurry-up drill late, before rolling left and finding Harry for a falling catch down the field. Not only did Harry get up slow and spend time with the trainers on the sideline after the play, but Bill Belichick didn’t count the late, unrealistic completion and forced the offense remain at the prior line of scrimmage.

--At one point the defense actually had to play half speed and allow the offense to complete a pass to set up the run-on field goal situation that Belichick clearly wanted to work on. That’s how good the defense has been to this point, and how bad the passing game has been at times.

--While he finished practice, it’s worth keeping an eye on Harry moving forward after spending the time on the sideline and seemingly grabbing at his left hip following the falling catch.

--Duron Harmon had an interception late in practice on a ball that was broken up by fellow safety Terrence Brooks in 11-on-11 work.

--St. Louis was one of the many players who seemingly struggled a bit with the heat.

--Undrafted rookie running back Nick Brossette ran hills by himself after practice.

--Winovich once again worked with Brady after practice on the far end of the field, hitting the veteran quarterback with a small blocking pad after he released throws. It’s a tough spot for the rookie, even if he is a fellow Michigan man. Hit TB12 too softly and he’s mad at you and not getting the work in he wants. Hit him too hard and something bad could happen that would make you enemy No. 1 for all of Patriot Nation. Tough life of a rookie.

--There were a lot more players of every position group staying behind for extra work after by far the hottest practice of the summer, including star vets like Brady, both McCourty twins, Gilmore and others.

--Danny Etling and Davis were the last players on the field.

--Those players talking to the media after practice included Watson, Brady, Dont’a Hightower, Skipper and others.

--The Patriots are scheduled to return to the practice fields behind Gillette Stadium again Thursday morning at 9:15 a.m., a workout that is open to the public. Belichick will have a press conference at 8:45 in the Gillette media workroom. 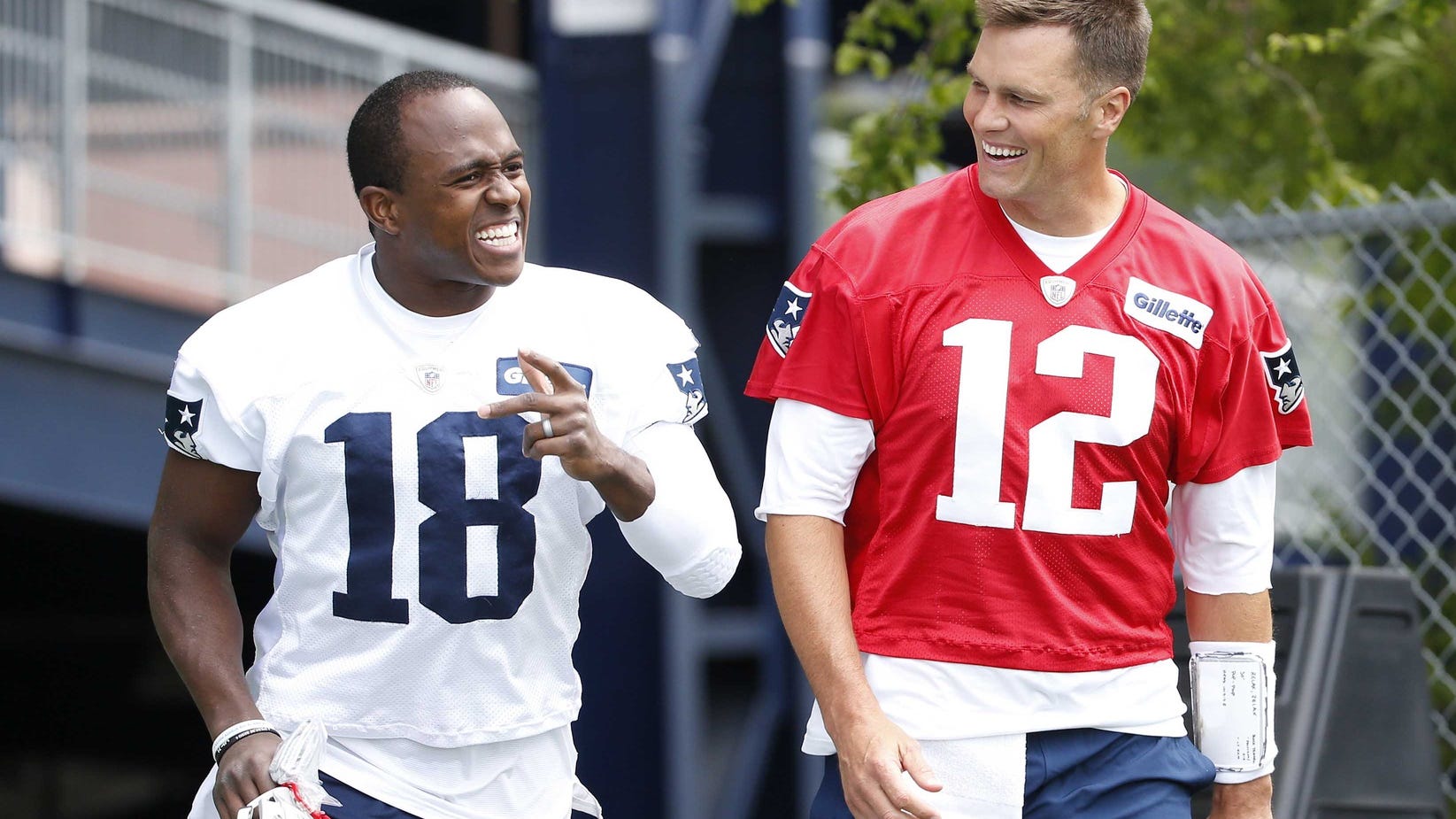 Tom Brady on No Contract Extension: 'Talk to Mr. Kraft'