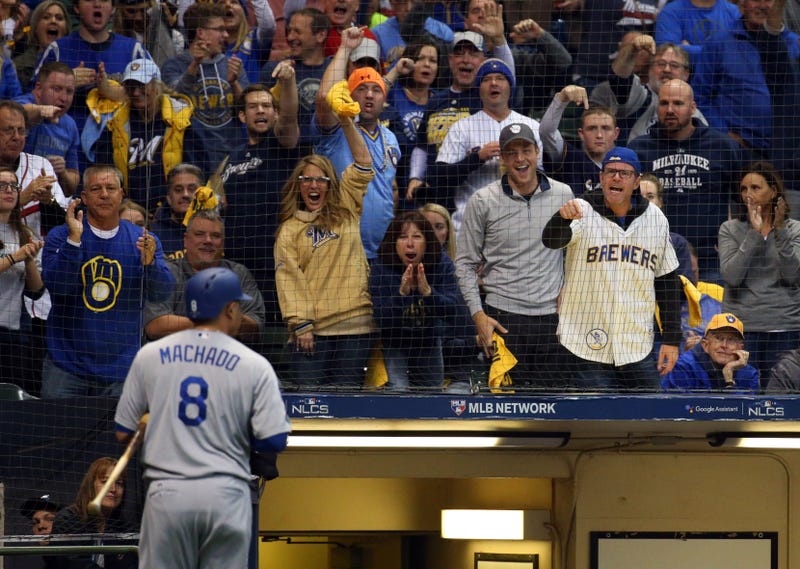 Manny Machado is one of the best young players in baseball, but at the moment he's also its biggest villain.

A year ago, his late slide left Red Sox second baseman Dustin Pedroia with a knee injury that may yet prove career-ending. During the playoffs, Machado admitted he doesn't always play hard. And then came the capper, a leg drag over the calf of Brewers first baseman Jesus Aguilar during the National League Championship Series, leading to the lustiest round of boos Milwaukee fans have showered on an athlete since Notre Dame ran up the score on Marquette.

With Machado leading the Dodgers into Fenway Park for Game 1 of the World Series on Tuesday, now seemed like a good time to check in with the Red Sox player who knows Machado better than anyone.

And what Steve Pearce has to say might surprise you.

"He's misunderstood," Pearce told WEEI.com on Monday. "He's the best person I know. Him and his wife are awesome."

"I'll stand by my comment -- he's the best person I know in this game," Pearce reiterated. "So when I see what's going on now, it makes me sad, because he's getting booed and he may be making some questionable plays, but he wears his heart on his sleeve, which a lot of people do. You hope that he turns it around and starts playing baseball the right way, the way he's capable of playing."

The player Pearce saw back in 2012 had superstar written all over him, particularly on defense.

"There were intangibles you can't teach," Pearce said. "I noticed his defense from the very first day. His clock was one of the best clocks I've ever seen and you don't see that out of a 19-year-old. His throws got on you quick. I would yell at him sometimes. He'd get the ball and be so nonchalant and I'd be like, 'THROW IT, Manny!' and he'd just turn around and fire it and hit me in the chest every single time. You don't see that out of a 19-year-old."

Offensively, Machado improved every season. He made an All-Star team at age 20 and saw his OPS climb each of the first five years of his career. He broke out for real in 2015, Pearce's last season in Baltimore, hitting .286 with 35 home runs.

Which brings us to Machado's recent behavior. Brewers standouts Christian Yellich and Travis Shaw labeled him a dirty player during the NLCS. Red Sox reliever Matt Barnes told the Eagle-Tribune on Monday he still harbors animosity towards Machado over the Pedroia slide.

Pearce knows Machado as a teammate and feels differently.

"That's why it's really shocking to me when I see everything that's going on," Pearce said. "I'm like, 'Man, Manny. What are you doing? Come on, man.' I'm probably going to hang out with him three or four times during this series, because he's one of my best friends in the game. I love the guy. When I see what's going on, I kind of want to wonder why, what's the disconnect, what's going on, because he's not that guy. He's not. He's better than that.

"He's probably getting caught up in the moment. It's heated. You're trying to make it to where we are today. You're trying to go to the World Series. You don't like grounding into double plays in big situations, so he's probably just letting emotions get the best of him. But I'll say it again -- he's the best person I know in this game."

Machado will earn nine figures from someone this winter as one of the most sought-after free agents in baseball. Pearce believes it will be money well spent.