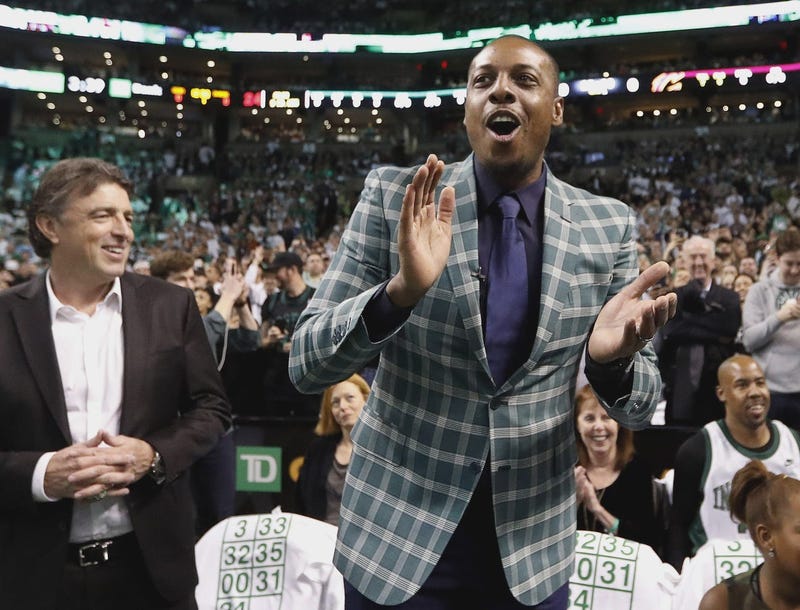 As part of a championship winning team, he understands how normal it is for guys to get into it and not always see eye-to-eye years later. Pierce talked about what happened between former teammate Ray Allen and the Celtics back in 2012 when he spoke to Glenn Ordway, Lou Merloni and Christian Fauria of OMF Thursday, and why this year's team can't relate to the 'Big 3' era because of how many established veterans he played alongside.

However, he does believe this year's Celtics still has a shot at winning a title and talked about how normal it is for guys to not always get along throughout the course of a regular season.

"Everybody knew a rift existed. It's not uncommon in sports," Pierce said. "We just saw Kevin Durant and Draymond on a winning team have a rift. You know, sometimes you're around guys so much, you start disliking one another cause you're around them so much. Everybody who's been married so long, you start disliking your wife for a period of time, you get used to each other. It's going to have your ups and downs, which is normal. It's just how you work through them."

When Allen bolted for Miami in 2012, it wasn't the decision that bothered Pierce the most but rather the way Allen went about it without telling anyone. Now, the matter is water over the bridge, according to Pierce, who explained how a simple phone call could have avoided a five-year rift between him and Allen.

"I believe it's over; we've all matured and moved on," Pierce explained. "At the end of the day, it was really about how -- when Ray left to Miami or how he did it and I always expressed that. We called you, I called his phone, I texted him, he wouldn't answer. The next thing I know we learned there was a problem with his contract.

"I was like 'Dude, just talk to me, maybe I can resolve this,' and he just never returned calls. Next thing you know, he ends up in Miami. For me, it was about my call. Have the respect from a guy who you've been to some war with, who we talked every day. Let's see if we can work this out again and that was the whole deal with me, personally."

Although Pierce and Allen have mended fences, the same can't be said about Kevin Garnett and Rajon Rondo.

"Now Kevin and Rondo they have their own little personal issues they had with Ray and that's something they have to iron out one day and I'm sure it is, but I believe it will blow over and that's my issue with it."

After most of the 2008 Celtics team agreed to have a reunion trip on Garnett's 'Area 21' show, Pierce says the plans are still on hold. However, the three (Pierce, Garnett, Rondo) still stay in touch on a regular basis along with guys like Glen 'Big Baby' Davis and Tony Allen, and spend time with each other's families in Los Angeles.