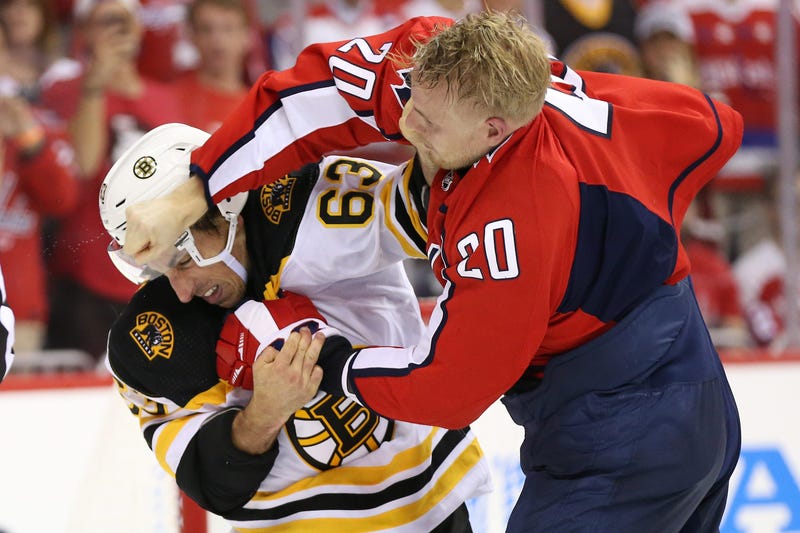 Well at least the Bruins won the fight.

Blown out in their season-opener by the defending Stanley Cup champion Washington Capitals on the Capitals' banner-raising night Wednesday, the Bruins hardly presented any resistance during their 7-0 loss.

But with 6:06 remaining in the third period, Bruins forward Brad Marchand grabbed a hold of Washington forward Lars Eller and landed several punches before Eller could get his gloves off. Eller wound up bloodied.

After the game, Marchand explained the reason he earned his first fighting major (in addition to an instigator penalty and a 10-minute misconduct) since Dec. 7, 2015 (against Nashville’s Roman Josi).

“His celebration, it was unnecessary,” Marchand told the media in D.C. “He took an angle in front of our bench and celebrated in a 7-0 game. So, I just let him know.”

Eller had scored the seventh goal of the game with 9:08 remaining.

The Bruins beefs with Eller go back to the forward’s days with the Montreal Canadiens.

The fight aside, the Bruins have a lot to correct before they get back in action on Thursday night in Buffalo. Marchand seemed confident the Bruins could turn the page.

“It’s [expletive]’ one game, it’s nothing,” he said. “We’ll let it go and worry about tomorrow tomorrow.”