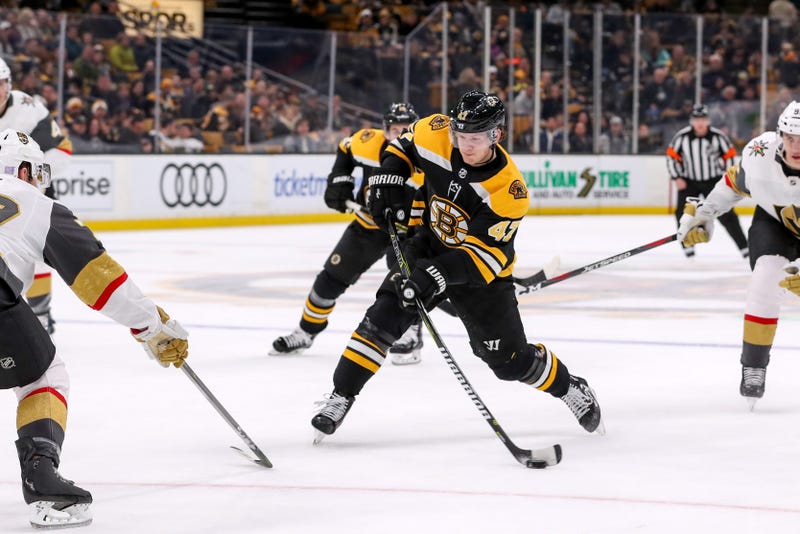 After Grzelcyk got burned for two breakaways – one that Jaroslav Halak saved, one that turned into a Lindholm goal on the rebound – Cassidy began to throw everything he could at Gaudreau in terms of defense pairs behind Bergeron’s line.

Miller, Zdeno Chara and Brandon Carlo all got their shot, and late in the second period Gaudreau became Torey Krug’s No. 1 assignment. Sometimes paired with Miller, other times with Carlo, Krug skated 11 shifts in the third period to Gaudreau’s 10, as the two diminutive NHLers (both listed at 5-foot-9) went head-to-head late in the Bruins’ 6-4 win at TD Garden.

Gaudreau scored his only goal of the game during that third period, but it was a well-defended play that ended with him banking a shot of Halak’s back from below the goal line on Miller’s side of the ice.

“Yeah, I mean … like I think before the game Bruce wanted to have skaters that can be in his face all night,” Krug told WEEI.com after the game. “He’s a good player, he’s going to make his plays, he’s going to get his chances, that’s just a top player in the National Hockey League, that’s what he’s going to do. So you just try to skate and be in his face all night. I felt like the one where he hit a guy backdoor, I felt like I played that defensively pretty well and you always have to look for the next player and he makes good plays. It’s exciting to be against him for sure.”

Krug’s known for his offense, and his two assists were crucial to the Bruins prevailing against the Flames. But he’s continually trying to prove himself as a go-to defender, and he was impressive against one of the hottest scorers in the NHL.

Krug felt like he sent Cassidy a message that in the near future he should be entrusted with the same matchups Bergeron’s line takes on. In past seasons Krug has had success, especially when paired with Carlo, skating behind Bergeron’s line.

“That was one that I think they have different matchups set up and it wasn’t going very well, so they shook it up and … I feel that I play extremely well with Bergy’s line,” Krug said. “I have chemistry with Bergy down low in the D zone, chemistry in the offensive zone with Pasta and Marshy. I want to be part of it more and more and that’s been the coach’s decision all year long to not put me with them and that’s probably why you don’t get too many pluses on the other end, eating a lot of minuses and not getting many plusses.”

Krug’s minus-9 this season but more time with Bergeron’s line might get him into the positive and be a fit for opposing top lines to play against.

A son and two assists

Bruins center David Krejci missed the morning skate Thursday to be with his wife Naomi for the birth of their son, his second child. He said he hung out at the hospital a while, took a nap (with his wife’s blessing) and then did his best to keep focused during the Bruins’ win.

Krejci finished with two assists, both on goals by linemate Jake DeBrusk.

“Lots of thoughts going through your head, so just trying to stay sane in the moment,” Krejci said. “But obviously it’s hard. You just bring one of your kids to the world, so obviously in your mind. So it was tough to focus sometimes on the game but just tried to stay focused, tried to keep my head in the game, talk on the bench and things like that. My teammates did a good job too. Like I said, it was a special day and with a win at the end, it was kind of the cherry on top of the cake.”

The Bruins allowed the first goal for the fourth straight game, a problem Cassidy wants to solve soon.

“I think it’s a concern of mine. I don’t know if it’s a concern of the guys in the room because I think they have some confidence to come back,” the coach said. “But it’s something that we had established here, and it’s getting away from us. So, we have to look at that.

“I don’t know if it’s anything we can fix overnight, but it’s something as a staff we have to talk about, maybe the leadership group. Like after Christmas, Jersey, we got off the Christmas break [and lost 5-2]. Today, it’s a letdown from the Winter Classic, blah, blah, blah, right? Like, we’ve got to be ready to go. It’s that freakin’ simple, and we weren’t.”