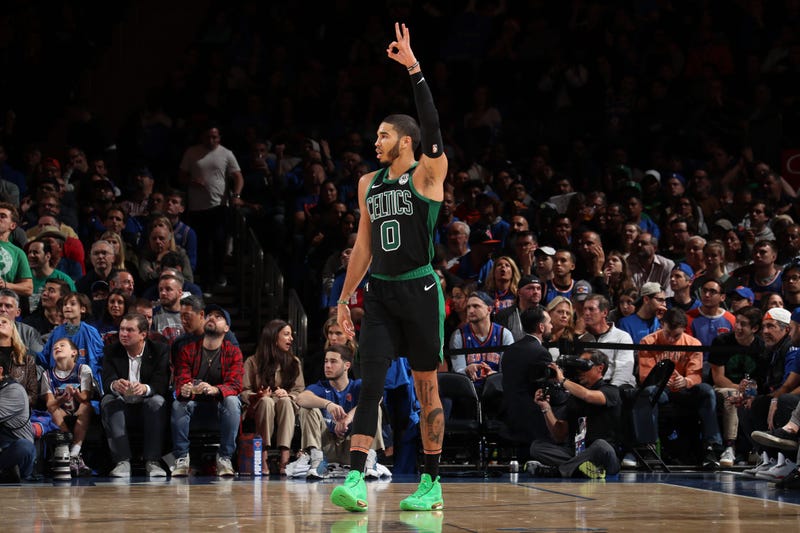 Trae Young was announced as 2019-20’s first Eastern Conference Player of the Week on Monday. He scored 38 in his first game, 39 in the next, finishing with nine assists and seven rebounds in each game.

Jayson Tatum was among the other players up for consideration, along with Kyrie Irving, Giannis Antetokounmpo, Pascal Siakam and Kendrick Nunn (Miami). Through Boston’s first three games, Tatum is averaging 20.3 points, 9.3 rebounds and three steals per game.

Tatum’s rebound and steal averages might not go up — hard to imagine his steal average doesn’t drop a bit — but his points per game average could increase.

Because Tatum isn’t shooting as well as he can.

Now, he has done very well from three. Although Tatum had an off night against the Knicks (2-for-7), he shot 50% from long range in each of the first two games. In total, he’s shooting 45.5% from deep. The Celtics are going to be in great shape if he keeps that up.

Tatum’s problems have come from inside the arc. He’s shooting a whopping 28.2% from two. And he isn’t just struggling from mid-range. Tatum isn’t finishing enough in the paint.

As the season goes along and he continues to get more comfortable with his new offensive approach, Tatum should take fewer contested mid-range shots and finish around the rim more frequently.

Again, it’s only been three games, but Tatum is also only shooting 75% from the free-throw line. He’s made over 80% of his free throws in his first two NBA season.

Convert a few more attempts at the line with a couple more makes in the paint and his points per game average should receive a nice bump.

And if Tatum is getting this level of recognition when he’s not all that efficient from the floor (34.4%), what will happen when he gets closer to his 2018-19 field goal percentage (45%)? There’s still quite a way to go, but if Tatum can build off this start, he should have no problem earning his first All-Star nod this season.