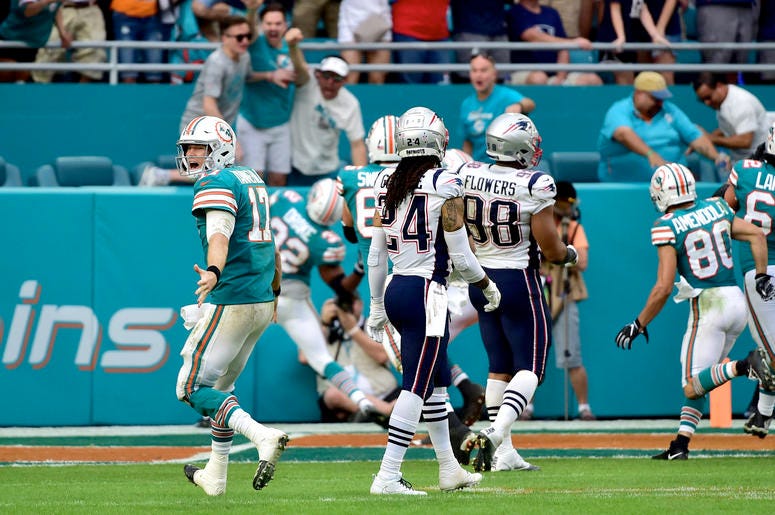 Bill Belichick didn't have much to say after the game on the final play, which saw the Dolphins score a 69-yard touchdown with seven seconds left on several laterals to stun the Patriots, 34-33 Sunday afternoon in Miami.

A day later, the coach added a little more to his thought process on the play.

On a conference call, Belichick was asked why Rob Gronkowski subbed in for Devin McCourty?

“It would be his ability to play the deep, long throw," he said.

Belichick didn't believe Ryan Tannehill could reach the end zone with a Hail Mary, but a deep throw was still in play.

“I think it was a little too far to get to the end zone, but certainly a deep pass in that situation is a possibility. I wouldn’t rule that out," he said.

On a broader scale, Belichick was asked about how he prepares for a play like that and he noted the team needs to do a better job preparing for things situationally and it starts with him.

“We look at all of those. We look at the ones that happened and look at the ones that our opponents have had in previous games that come up and sometimes random things around the league," he said. "We have to do a better job of that. It starts with me. We just have to play better situational football and we’ll work to try and achieve that.”

Belichick added: “I have to do a better job with it.”

Minutes later, he went on Ordway, Merloni & Fauria and after several more questions on the play, he indicated that was the least of their problems in the game.

In sum, it appears Gronkowski was in the game to defend a deep pass regardless of it reaching the end zone or not, and the rest of it just came down to bad execution by the team. Why McCourty was subbed out instead of say a defensive lineman remains a mystery.