With the Patriots on their bye, Week 10 in the NFL still went on and it was an exciting Sunday of football with some terrific games.

Here are five quick thoughts, including how the Patriots were able to have a good day despite not playing.

Buffalo fell to the Browns in the closing seconds to fall to 6-3 on the year. This means even though the Patriots were off, their lead in the AFC East was extended to two full games. While the Jets and Dolphins both won, they are 2-7 and not close to being in contention for the division title. The Patriots have a plus-172 point differential, while the Bills are plus-24.

2. Ravens appear to be top competition in AFC

Both the Chiefs and Colts dropped games again Sunday, giving them both four losses on the year. Right now, it appears the Ravens (7-2) are the Patriots’ top competition in the AFC. Houston and Buffalo are both 6-3 and then Kansas City is 6-4. Also, given the Patriots’ upcoming schedule and the Ravens holding the tiebreaker, the Patriots getting the No. 1 seed is far from a lock.

With Jacoby Brissett out with a knee injury, Hoyer made his first start since 2017 in the Colts’ loss to the Dolphins at home. The veteran struggled, going 18-for-39 passing for 204 yards, one touchdown and three interceptions for a QB rating of 38.8. It’s unclear what Brissett’s status is moving forward, but he clearly gives them a much better chance of winning games.

In one of the best games of the day, the Titans came back from nine points down in the fourth quarter to beat the Chiefs, 35-32. Derrick Henry finished with 23 carries for 188 yards and two touchdowns. It was Mahomes’ first game back since suffering a dislocated knee cap a few weeks back. He was 36-for-50 passing for 446 yards and three touchdowns in the loss.

If anyone thought Jackson’s performance against the Patriots last week was a fluke, think again. Jackson completed 15-of-17 pass attempts for three touchdowns and zero interceptions for a 158.3 rating, the highest attainable mark, and added a career-long 47-yard touchdown run in the Ravens' 49-13 win over the Bengals. 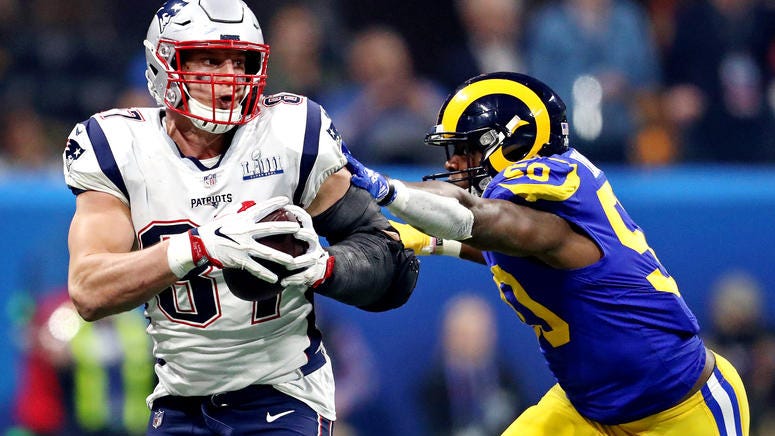