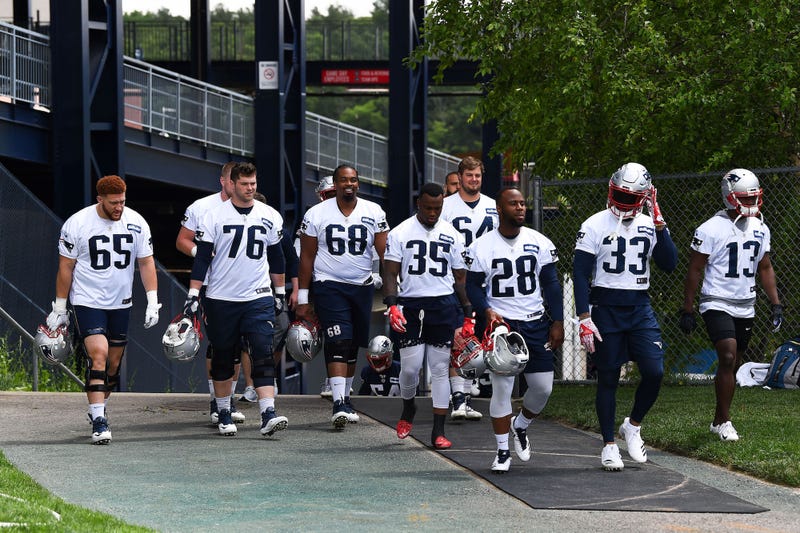 In less than a week, the Patriots will have their initial 53-man roster set.

There are still a few roster spots up for grabs that will come down to the final day and a lot could be decided in Thursday’s preseason finale against the Giants. Things have also changed a bit since last week’s projection following the third preseason game and also the news that Eric Decker will retire.

Here’s our latest 53-man roster projection with a final one coming some time on Friday.

Rookie Danny Etling has only played in the closing minutes of the first two preseason games, so it will be Brady and Hoyer on the roster. We do see Etling having a good chance of being signed to the practice squad, though.

Right now we have Mike Gillislee off the roster, but it’s worth noting Michel still hasn’t practiced in three weeks. Missing so much time and having the regular season being two weeks away, even if he returned this week it’s hard to see him being a full go for Week 1. Perhaps, the team could keep Gillislee around just as an extra body. Another thing to look out for is if the Patriots place Michel on injured reserve, but intend on him returning during the year, he needs to be on the first 53-man roster. If this happens maybe Bolden is left off with the hope he goes unclaimed and then is brought back once Michel goes to IR (Gillislee would likely be claimed, so they couldn’t do this with him).

No changes here. Hollister didn’t play in the game Friday night giving Will Tye extended playing time, but he didn’t do much with the opportunity.

Yes, we know we only have three true receivers listed, but since the Patriots have so much pass-catching depth at other positions it can be done. We just don’t see Riley McCarron, Braxton Berrios or Devin Lucien being deserving of a roster spot. It is worth pointing out a lot of times when a specific position is thin on the active roster, it is strong on the practice squad, so don’t be surprised if two or three of the 10 players are receivers. Also, don’t rule out a receiver being brought in either via trade or as a free agent.

Most of the position is set with the starters and then Waddle being the swing tackle. Additionally, with Karras having a strong showing against the Panthers, he seemingly has locked up one of the backup roles and then it will come down to John and Matt Tobin for the final spot. John played the most of any offensive player Friday, so right now we’re giving him the edge. Cole Croston seemed like a good possibility given his versatility, but he only played two snaps against the Panthers. He could potentially be a player the team is trying to slide onto the practice squad.

We’re going deep at this position with Davis being added from our last projection. He’s seen extensive time with the starting unit this preseason and obviously there’s a reason for it. Since Flowers hasn’t been a full participant in practice or played in any of the preseason games, maybe more depth is needed on the edge and that could be another reason to keep Davis.

We don’t have Marquis Flowers on as he hasn’t done much to this point in the summer and saw his first action against the Panthers in the fourth quarter. Things could change in the final week, as another player potentially could get added in either Flowers or rookie Christian Sam.

With McCourty playing safety on Friday, we see him making it since the team is trying to make him more versatile to justify his roster spot. It will likely come down to Crossen and J.C. Jackson for the final spot and Crossen saw time with the first-team Friday when Jackson didn’t, so as of now we’re giving the spot to Crossen.

Yes, we now have Richards on the team. He was a heavy contributor on special teams Friday night and at this point we see him sticking around for another year for that exact reason. Everything else is pretty straight forward now that Eddie Pleasant reportedly was released.

Corey Bojorquez hasn’t appeared in a game yet, which is a bit puzzling. Maybe the team is trying to sneak him onto the practice squad?